A Colorado inmate is coming forward to claim he's the biological son and legal heir of the late pop star Prince's estate. Detectives also revisited Paisley Park as “a component of a complete investigation.” Video: Reuters 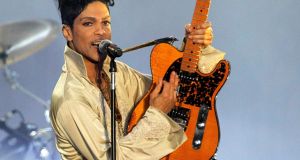 Prince’s body was found in an elevator at his Paisley Park home in Minneapolis on April 21st. File photograph: Olivia Harris/Reuters

A search warrant affidavit obtained by the Los Angeles Times on Tuesday revealed that a doctor who saw the late pop star Prince twice before his death and was at the musician’s home when his body was found had prescribed him medication.

The document said Dr Michael Todd Schulenberg was at the star’s Paisley Park Studios compound in suburban Minneapolis to drop off test results when Prince’s body was found in an elevator on April 21st.

The affidavit said Schulenberg had also prescribed Prince medication, but did not specify what those medications were or whether the prescription had been filled. The search warrant was carried out on May 5th at North Memorial Medical Center.

Schulenberg, whose name was misspelled in the documents according to the Los Angeles Times, could not be reached for comment on Tuesday night.

Detectives also revisited Paisley Park on Tuesday as “a component of a complete investigation,” the Carver County Sheriff’s Office said in a statement on Twitter, without providing further details.

Prince died one day before he was scheduled to meet another doctor who specialises in addiction treatment for a “life-saving mission,” that doctor’s lawyer said at a news conference last Wednesday.

California doctor Howard Kornfeld was first contacted by Prince’s representatives on April 20th, one day before the singer’s body was discovered at his home, attorney William Mauzy told reporters.

Prescription opioid medication was found at the scene, according to a law enforcement source with knowledge of the investigation.

The Call of the Wild: Harrison Ford in one of his most engaging performances
3

Colum McCann on Israel-Palestine: ‘I was completely ignorant of what was going on’
7

Zoë Kravitz on High Fidelity: ‘A lot of white men who identified with the book think it’s theirs’
10