Pills ’n’ thrills and rock and roots: What’s on this week 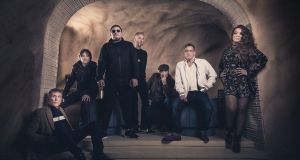 Co-curated/overseen by music booker Andrea Keogh, the first Culture Vultures event this weekend takes place on Friday night as part of the Alternative Kilkenny Arts Festival, and features music from Little Green Cars, spoken word from that band’s Stevie Appleby, and a public interview with Tomm Moore of Oscar-winning animation company Cartoon Saloon. Culture Vultures then drives like a demon on Saturday to Beaulieu House, Baltray, Drogheda, Co Louth, where – in association with the town’s Highlanes Gallery – the event features an exclusive public interview with visual artist Alice Maher, alongside music (Marlene Enright) and spoken word (Colm Keegan). Your host for each event is me, myself and I.

Is this a case of the old dog making sure the young pup knows his place? Or is it the pup planning to teach the old dog new tricks? Either way, these performances will be a treat, as two of America’s finest songwriters – each of them Grammy winners – in the roots/folk area team up for a bunch of rare nationwide dates. The tour continues into next week with shows at Town Hall Theatre, Galway, Saturday August 19th, Theatre Royal, Waterford, Tuesday August 22nd, and culminating at Vicar Street, Dublin, Friday August 25th.

Onetime member of almost-forgotten Irish band Jubilee Allstars, Barry McCormack has been operating for so long under the radar that we can almost no longer hear the blips. When he does surface, however, it is always with a fine album of weighty narrative songs that no one else would dream of writing. McCormack’s most recent album, The Tilt of the Earth, is his best to date, and this rare provincial date is well worth travelling to. Special guest band (which features McCormack’s brother Niall, also a former member of Jubilee Allstars) is Let’s Get Lost, a rough’n’ready unit previewing songs from their album Something Else. As part of Alternative Kilkenny Arts.

A reasonably regular visitor to Ireland (he was last in Dublin in January of this year), Mancunian poet Mike Garry returns in the wake of the Manchester Arena bombing, and so will undoubtedly have some carefully chosen words to deliver. Garry will also showcase his lean, deft spoken word skills at getting to the nub of matters. Special guest is uncompromising Irish performance poet Lewis Kenny, who is poet-in-residence at Bohemians football club.

We have written about Glen Hansard before in these pages, but this time he’s on his own, without the safety net of a group of musicians around him. Actually, strike that – if there’s any musician that doesn’t need his hand held it is Hansard. A staunch supporter of the busking tradition (indeed, the streets of Dublin city centre in the late ’80s/early ’90s is where he honed his craft), the man knows how to hold a crowd in the grip of a performance. This is a fully seated show, but we’re guessing at some point in the evening there’ll be a switch from sitting to standing. He’s like that, is Glen Hansard.

The inaugural Dublin Quays Festival gets off to a fine start with some really good music acts (Orchid Collective, Maria Kelly, Cat Dowling, Old Hannah, Fiction Peaks, Death in the Sickroom, Squarehead), DJs (Kelly-Anne Byrne, Space Talk), spoken word (John Cummins), comedy (Alison Spittle) and too much other good stuff to list here. DQF is a solid addition to the summer city centre annual event calendar, and the best part is that all events, in multiple venues along the main pathway of the River Liffey, are free.

Which of us would have ever thought that we’d be writing about Happy Mondays in the here and now? From the mid-1980s to 1993, the band’s drug consumption would have felled a small country, but they soldiered on, albeit fitfully, regrouping now and again before disappearing. That they have been operational since 2012 says something for strong constitutions, but their legacy – especially 1988’s Bummed and 1990’s Pills ’n’ Thrills and Bellyaches – remains a long-night-out joy. This gig brings to a conclusion Bulmers Live at Leopardstown 2017.

The Movie Quiz: Maureen O’Hara was raised in which leafy Dublin suburb?
7