Pierre Boulez thrilled the adventurous and appalled the conservative

Boulez was the last of a great avant-garde line. But was Gilbert Kaplan, another conductor who died last week, just faking it? 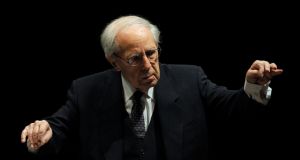 You could look at Boulez’s always baton-less hands and see suggestions of refinements that had not yet actually made it into the playing. Photograph: Christophe Ena/File/AP Photo/

The death last week of Pierre Boulez at the age of 90 marks the passing of the last great figure from the postwar European avant-garde. Boulez, along with Luciano Berio (1925-2003) and Karlheinz Stockhausen (1928-2007), was a figurehead in a movement that thrilled the musically adventurous at the same time as it appalled musical conservatives.

Sixty years ago, Stockhausen was at work on his biblically inspired, five- channel electronic work Gesang der Jünglinge, Berio was wrapped up in the opening of the Studio di Fonologia in Milan and Boulez had just seen the premiere of his surrealist Le Marteau sans Maître. It would have been almost impossible to tell what the future would hold for the three composers.

Who would have imagined that Berio would write his genuinely folksy Folk Songs within 10 years, and turn his hand to completing the third act of Puccini’s Turandot in 2001? Or that Boulez would be the man to establish a research centre for technology and music that would achieve a worldwide influence that had eluded any earlier electronic studio? Or that in the 1970s Stockhausen would announce a grandiose operatic project that would occupy him for decades, his seven-day opera Licht, each instalment named after a day of the week?

Strangest of all, who would have imagined that Boulez would become a guest conductor of the Cleveland Orchestra, and later principal conductor of both the BBC Symphony Orchestra and the New York Philharmonic? Or that, as well as his 20th-century favourites, he would record music by Beethoven, CPE Bach, Falla, Handel, Scriabin and Bruckner?

He was a frequent visitor to London, even after his term with the BBC Symphony Orchestra ended. I had the good fortune to hear a number of his London concerts and witness how his supremely analytical ear could bring light and clarity to the densest of orchestral textures, and how, no matter what you could hear, you could look at his always baton-less hands and see the suggestion of refinements that had not yet actually made it into the playing.

I heard a story recently of someone who deputised for him when he was taken ill and couldn’t conduct. But Boulez came to the rehearsal anyway, and sat there without a score, just listening, not even taking notes. Afterwards he came forward with a long list of suggestions, which even extended to identifying wrong notes that had been played at various points by particular instruments.

Last week the world lost another conductor who had also worked with many of the world’s leading orchestras. But Gilbert Kaplan, who died at the age of 74, probably had the narrowest repertoire of anyone who stood in front of so many distinguished orchestras.

His career was based on a single piece, Mahler’s Second Symphony (the Resurrection), which he recorded no fewer than three times (with the London Symphony Orchestra in 1987, the Vienna Philharmonic in 2002 and the Wiener KammerOrchester in 2013) and conducted more than 100 times.

That’s a pretty phenomenal achievement for someone who was not a professional musician, let alone a conductor. Kaplan, an economist by training, made his fortune in publishing. He built a media empire out of the success of his Institutional Investor, a magazine for pension fund and asset managers.

But when he fell in love with Mahler’s Second, at a performance conducted by Leopold Stokowski, nothing would stop him. Beyond conducting, he bought Mahler’s original score and published a facsimile of it, and helped make an arrangement for smaller forces so that it could be played by more orchestras,

The relationship between conductors and orchestras is delicate enough and often fraught, so Kaplan’s singular achievement always made me wonder about what skills he had actually developed that made it viable for him to work with leading orchestras. He always denied that he paid for the privilege, although it undoubtedly helped that he never took a fee.

But, on a practical level, did he really know what he was doing? Had he managed to master enough of the basics that he could get by? Had he somehow managed to find a way of communicating with players so that it didn’t really matter whether he could conduct or not? Or was he like someone in an episode of Faking It, basically just bluffing it on the basis of the tutoring he had paid for?

I always liked to think that he was the maverick who was so passionately absorbed by the piece he conducted, and had such vivid ideas from his immersion in it, that he could somehow make up with talk what he lacked in technique.

I had a long discussion with a conductor about this, in which he always flatly denied that Kaplan could have had any meaningful role in the performances he gave. Neither of us could prove anything one way or the other, although first principles were obviously stacked against my more hopeful position.

In the end the conductor tracked down an eminent oboist who had played the piece under Kaplan. The message was not good. Kaplan, the conductor was told, was a hopeless case, and working with him had been one of the worst experiences in the musician’s life.

Small wonder, then, that a couple of years later, in 2008, there was an explosion of player resentment when Kaplan conducted the New York Philharmonic. If you want the low-down on one musician’s response, check out David Finlayson’s blog, http://davidfinlayson.typepad.com.

On the other side of the case, there are the recordings. The one with the London Symphony Orchestra is better than you can possibly imagine for an amateur conductor.

Build it and they will come: the story of the Irish language in a disused airport
7