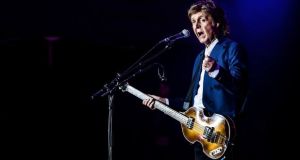 Paul McCartney has announced he will release his first new music in four years in the form of a double A-side single. File photograph: Sophia Juliane Lydolph/EPA

Paul McCartney has released his first new music in four years in the form of a double A-side single and announced a new album, Egypt Station, which is due out in September.

The songs, I Don’t Know and Come On To Me, mark the legendary singer-songwriter’s first musical output since he was featured alongside Kanye West and Rihanna on FourFiveSeconds in 2015 , and his first solo single since Hope for the Future, which featured as part of the Destiny 2 soundtrack.

Of the forthcoming album’s enigmatic title, McCartney said: “I liked the words ‘Egypt station.’ It reminded me of the ‘album’ albums we used to make... Egypt Station starts off at the station on the first song and then each song is like a different station. So it gave us some idea to base all the songs around that. I think of it as a dream location that the music emanates from.”

The 14-song album will be released on September 7th on Capotol Records. His last album New was released in 2013 and peaked at number three on the UK and US album charts.

The singles, released on June 20th – the first a downtempo ballad, and the second an upbeat rock tune – provide the first preview of McCartney’s new album. Last week, McCartney appeared unannounced at Liverpool’s Philharmonic Club, where he played a secret gig consisting of classics from the Beatles and Wings before debuting Come On To Me for the first time.

Fans were tipped off about an upcoming McCartney release when then 76-year-old, whose birthday was on Monday, scrubbed his social media accounts clean, replacing his avatar with a drawing of a train track and a tunnel alongside the hashtags #PaulMcCartney and #EgyptStation.

In late 2017, McCartney teased his upcoming release in an interview published on his website. “I’ll probably be putting out a new album. So, I’d like that to be something I really love and then hopefully the fans will love it too,” he said. “We’re putting the finishing touches to it now and at the beginning of next year. So, I would like to achieve making that a really great album.”

McCartney, who was inducted into the Rock & Roll Hall of Fame as both a Beatle and a solo artist, was recently seen marching with gun control advocates in New York City at the March for Our Lives, where he wore a T-shirt that read “We Can End Gun Violence” and recalled bandmate John Lennon’s death. “One of my best friends was killed in gun violence, right around here, so it’s important to me,” he told CNN.

McCartney was also recently seen in Liverpool filming a segment of “Carpool Karaoke” with Late Late Show host James Corden, with whom he duetted at last week’s surprise set in Liverpool. On Monday, a teaser video was released of McCartney’s appearance, which is set to air this week. –Guardian