Other Voices line-up announced: win tickets to the church 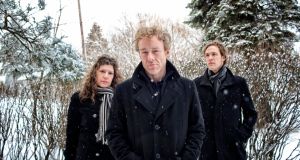 Low, Keaton Henson, Glen Hansard, Jack Garratt and The Academic will be making the trip to Kerry in early December to take part in this year’s Other Voices festival. They join previously-announced acts including Richard Hawley, Lapsley, Gaz Coombes, Otherkin and Gavin James. Minnesota band Low will be coming to Other Voices for the first time, as will English folk rocker Keaton Henson. Glen Hansard is an old hand, having presented the first Other Voices TV show, and will perform tracks from his new album Didn’t He Ramble.

Jack Garratt is one of the most hotly tipped acts in British music and follows up a performance at this year’s Electric Picnic with a trip to Dingle. The Academic are one of the rising stars of the Irish indie music scene. This year’s festival takes place from December 4th to 6th. As well as the regular concerts in the 800-year-old church of St James, the Kerry fishing town will be hosting a music trail featuring 45 new and established artists playing in unusual venues around Dingle. This year’s trail features the likes of David Kitt, Sorcha Ni Bhriain, Declan McLoughlin, My Tribe Your Tribe, Eve Belle, Mongoose, Hare Squead, Rusangano Family and many more.

The Imro Other Room at Other Voices will also have performances from Bitch Falcon, Gavin Glass, Hawk, Saint Sister, Talos and a viewers’ choice selection. Jim Carroll’s Banter discussion room will also be returning to Dingle. All Music Trail and Banter events are free and open to the public over the weekend. Due to the tiny capacity of the church (it holds just 80) tickets for the concerts there are only available through competitions. The Irish Times has a pair of tickets for each evening of the festival (Friday, Saturday and Sunday night) to give away. To be in with a chance of winning, answer the following question and fill in your email. Winners will be selected at random and notified on Thursday, November 19th.

Further competitions for tickets will be announced on othervoices.com. RTE will be recording all performances in the church for broadcast in 2016. An Other Voices podcast featuring interviews and exclusive live music is now available. The latest episode features music from Nathaniel Rateliff, Jape, The Unthanks and Mahalia.

Win tickets for Other Voices

1. The promoters are The Irish Times Limited, The Irish Times Building, 24-28 Tara Street, Dublin 2.
2. The prize is a pair of tickets for one evening of the festival (Friday, Saturday or Sunday night)
3. Employees or agents of The Irish Times, and their families or other persons connected with this promotion are not eligible to enter.
4. Prize is as offered and no cash alternative will apply.
5. The prize is not transferable.
6. The competition is open to all residents on the island of Ireland aged 18 years and over.
7. Competition entry is by use of the form embedded above
8. Entries not submitted in accordance with these rules will be disqualified.
9. The promoters’ decision is final and binding in all matters and no correspondence will be entered into.
10. The promoters reserve the right to change any aspect of the prize.
11. The prize will be subject to any additional terms and conditions of the suppliers of the prize.
12. The promoters are excluded from liability for any loss, damage or injury which might occur to the winner arising from his or her acceptance of the prize.
13. The winner may be required to participate in unpaid promotional related publicity undertaken by the promoter or its associated companies.
14. Entry to this promotion shall be deemed full and unconditional acceptance of the terms & conditions.
15. The promoters reserve the right to amend these terms and conditions.
16. These terms and conditions shall be governed by the laws of Ireland and subject to the jurisdiction of the Irish Courts.
17. Details of the competition winner will be published on The Irish Times website.
18. Competition ends at 5pm on November 19th 2015.