In wake of HBO sex abuse claims, singer’s home back on market for 31% of initial price 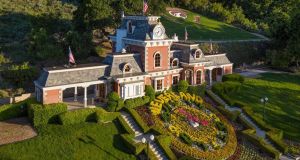 Michael Jackson’s Neverland ranch has returned to the property market at a drastically reduced price as allegations of sexual abuse have been brought to light.

The singer’s 1,100ha (2,700ac) California property, now rebranded as Sycamore Valley Ranch, has been listed for $31 million, or about €27.5 million, a major drop from the original asking price of $100 million, or about €88 million, when it was first put on the market in 2015. The main residence is a 1,115sq m (12,000sq ft) house with a master bedroom suite and three guest suites. The estate also includes a four-suite guest house, cinema and dance centre, tennis court, swimming pool and train station for the estate’s private railway.

Real-estate agent Kyle Forsyth told CBS News that the decision to relist with a reduced price was because “the timing is right for new stewardship”. The drop is allegedly the result of years of drought and natural disasters, but the property is well maintained. Jackson originally brought it for $19.5m in 1987.

The news comes just days before HBO airs Leaving Neverland, a two-part four-hour documentary that features the testimonies of Wade Robson and James Safechuck, two men who allege that the singer sexually abused them as children. In the film they claim Jackson would habitually molest them in various parts of the property.

“It sounds sick, but it’s kind of like when you’re first dating somebody,” Safechuck explained, after listing the many spaces at the complex where Jackson would allegedly abuse him.

Jackson’s estate is suing HBO, calling the documentary a “one-sided marathon of unvetted propaganda to shamelessly exploit an innocent man no longer here to defend himself”. The suit claims that the network is in breach of a nondisparagement clause from a 1992 contract.

The singer’s family have also been speaking out against the film, with three of his brothers and a nephew appearing on CBS this week to criticise its content, despite none of them having seen it. They believe the two men are coming forward for purely financial reasons. “It’s all about money,” his brother Marlon said. Taj referred to his uncle as “a blank cheque”. – Guardian