Nicky Byrne: ‘I feel worse than I did yesterday to be honest’ 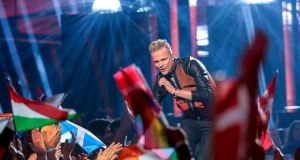 Former Westlife singer Nicky Byrne was still in shock a day after he was knocked out of the semi-finals of the Eurovision Song Contest on Thursday evening. “I feel worse than I did yesterday to be honest,” he says.

He can’t understand it.

“I thought we delivered a very good performance. I’ve been on stage for 20 years and you know when you’ve nailed it. You know when you smashed it . . . and we nailed that. We were buzzing coming off. Had I missed a note and f***ed up, I would say ‘hands up I didn’t deliver on the night’.”

On Thursday night he even watched his performance back “for pig iron, to confirm to myself that it was good and it came across on television exactly how I felt when I was doing it”.

He is not the only person who is surprised, he says. He spent today walking around Stockholm with his family and every five feet he was stopped by people from all over the continent saying “I don’t know how you didn’t make it!”

Could he have done anything differently? “I honestly can’t see what we could have done,” he says.

“Maybe if we had an endless budget we could have done a load of graphics like Russia did, but to be honest with you the Russian one was just copying last year’s entry and I’m not sure that Russian song is very good.” He can say these things now, he says, because he’s out of the competition.

Some things clearly went against them, he says. He thinks that the second semi-final was a stronger group than the first. He also believes that there was bloc-voting.

“We were in there with Latvia, Serbia, Lithuania and Belarus amongst others and they all vote for each other to make sure they’re all in the competition on Saturday as a bit of a stand against Russia. So Switzerland, Ireland, Norway and Denmark fall by the way . . . Is it even about the quality of the song anymore? I really don’t know.”

What should RTÉ do about future entries? “We threw everything and our granny at this,” he says.

“[We went in] with one of the best songwriters in the pop world, Wayne Hector, and then a world-class producer, Ronan Hardiman and someone from a band like Westlife that has a fanbase across Europe . . . I have no idea what RTÉ should do next. I really don’t.”

He talks about the support he has received from his team, his musical collaborators, his family, former bandmates in Westlife, former Eurovision stars such as Linda Martin and Eimear Quinn and the Irish public. He sighs.

“The overwhelming support is lovely, but the reality is we’re not there tomorrow night, which is a very bitter pill to swallow.”

He says he has enjoyed the Eurovision immensely until this point. “I’ve had the best times over the past 12 days. It’s a fantastic event that everyone in Europe should be proud of.”

Is he sticking around for the final? No, he says. He has changed his flights and will be flying home on Saturday.

“I’m not the right person to hang around. It was a great experience. It didn’t go my way. I’ll go home and watch it from my couch tomorrow night, cheer on everyone else and go out and walk my dog like Roy Keane did many years ago.”

He laughs. “It’s a relief to be able to honestly say to myself ‘you’ve done your family and yourself proud.’ I take solace in that.”

All Against All: A cautionary tale – and what 1933 can tell us about now
4