Dury jnr has reasons to be cheerful: he’s established his own musical identity, released a career-best in ‘Prince of Tears’ – and his son Kosmo is set to carry on the family legacy 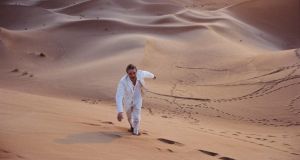 Desert rat: Baxter Dury describes himself as “a bloke in an ill-fitting ’80s suit talking over some synthesisers” and his new song Miami, about a Harvey Weinstein-type creep, as “really coarse and horrible”

Baxter Dury is very sorry. When he calls back almost an hour after our scheduled interview time, he is full of apologies. “I’m sitting on my balcony in the sun and I forgot all about it,” he meekly explains in that distinctive sonorous purr of his. He sighs. “It’s been a long few weeks.”

Dury has just come off an arena tour supporting Noel Gallagher’s High Flying Birds, is about to embark on a run of festival dates that includes Westmeath’s Body & Soul later this month, and he is tired. The Gallagher dates, he says, were interesting. “Playing the really big venues, that aspect of it was fun,” he agrees. “But they weren’t necessarily very kindly to us, the audiences. They’re so into the Oasis and Noel culture that they’re not really ready to accept a guy in an ill-fitting ’80s suit singing over a synthesiser.”

It’s difficult to discuss Dury’s career without the context of his late father Ian, who has loomed large over his output – although perhaps arguably less so in recent times. At the age of five, the now-46-year-old appeared on the cover of Dury senior’s album New Boots and Panties; these days, he is less bothered about the references.

“You’re only nervous about comparisons when you don’t know yourself, or don’t know what you’re doing – so you’re worried that you’re doing something on the premise of somebody else’s achievements,” he says. “And y’know, my father was a big, formidable character. Everybody needs something to work against, in a way, and that’s what I needed. And it’s a good thing to work against, because it gives you the skills. It’s equivalent to being from a tiny village somewhere and wanting to escape. That effort, that journey is important, and the reason to escape is important, so that’s what I’ve done. I’m not trying to escape Ian, or trying to close him down,” he clarifies, “I’m just trying to prove that I’m valuable in my own right, and I think that’s happened.”

There was never any real sense of rebelling against the “family trade”, as it were; raised largely by his artist mother Betty Rathmell, there was always art, music and creativity in abundance around the house. In other words, a career in banking was never really on the cards.

“It was a positive musical environment I was brought up in, so I never had to find it; it was always around us,” he explains. “We had bongos and things like that. In fact, where I am now is where I was mostly brought up – I’m living in the same house. It was inhabited by musical people and instruments and was a very musical place, much to the frustration of anyone who lived next door. Someone was always shaking a Corn Flakes packet or making a noise of some sort. There was these bohemian-themed endless evenings. That was really good, but then in your 20s, you try and do something else; I didn’t try and become an explorer, but I would have done if I’d had to. I tried everything else . . . and then I just came back to what was inevitable.”

He says that his 15-year-old son Kosmo is following in the family tradition, too, something which worries and pleases him in equal measure.

“He’s obsessed by music, it’s pretty much his greatest obsession. In a way, he’s gotten into it more than I ever was, and he’s more adept,” he laughs. “But it’s a different mindset that he’s got; he’s very high-achieving. So let’s see what happens. I’ve been trying to involve myself, but at the same way you’ve got to let them find their own route. It’s a very difficult process, and being related to someone is not necessarily an advantage. I can lend him a guitar or an amp but you can’t lend them too much advice. [Music] is a pretty unlikely career to succeed in, so if you advise people, you’re basically telling them that it’s really unlikely,” he laughs. “So you’ve got to just let them get on with it, basically.”

Essentially, you’re listening to a bloke talk over some synthesisers, and I think too much of that becomes trying

“Getting on with it” is a motto that has applied to Dury’s own career, too. He has been through multiple stylistic changes over the course of his five albums, with earlier material ploughing a more indie furrow until 2014’s It’s a Pleasure swerved into synthpop territory. Last year’s career-best, Prince of Tears, meanwhile, saw him adopt the lecherous fictional character of Miami on one track, which inadvertently drew parallels with one controversial high-profile figure in the news.

“I didn’t think that all the sociological stars were aligned for me to do something relevant, but sometimes your environment gives credence to what you’ve done,” he says. “So when you write a song about Miami, unfortunately you get a character like Harvey Weinstein, and then people make a comparison – but unfortunately it wasn’t intentional. It did make me sound much cleverer than I am, though. But there was a bit of Weinstein in Miami, definitely; a bit of a creepy guy, a bit of ‘dudeism’ going on. But it was an accident, more than anything else.”

The album – which featured guest appearances from the likes of Jason Williamson (Sleaford Mods) and Rose Elinor Dougall – was indubitably his most lyrically candid release to date.

“Well, causing offence is quite an achievement these days,” he says, chuckling. “The only good thing about a song like Miami, for example, is that we had an edited version, and it actually got a relative amount of radio play on indie stations. And then all the kids went and listened to it on YouTube, but [the unedited version] is really coarse and horrible so they all got a clip round the head by their mums. So I think that was quite a good thing. I don’t know what ‘shocking’ is anymore, really. Songs like that are really like a vehicle to say what you’re really thinking.”

Perversely, the album has been less successful in France, where he enjoys huge success (“probably because of the Gainsbourg thing . . . I guess there’s a flavour, culturally, that appeals to them,” he muses) and more so in the UK. Nevertheless, he already has new material on the boil and aims to finish it this year – and what’s more, it’s shaping up to be just as concise as his others.

“I’ve got a short attention span,” he explains of the brevity of his albums’ running times. “I just find things are more interesting in rich and short spurts, otherwise they become really tiring. And no one really wants to hear someone talk for an hour; short and funny is better. Essentially, you’re listening to a bloke talk over some synthesisers, and I think too much of that becomes trying. Double-albums? Nah, I just find that too indulgent. They’ll probably get shorter, actually. Also, no one listens to albums anymore – so if you make them really short, they’re more likely to listen to them. Albums are fragmented by technology. I mean, I am that person; I can’t even read a TV listing thing without losing interest.”

The biggest difference between the Baxter who released debut album Len Parrot’s Memorial Lift in 2002 and the Baxter of today, he says, is quite simple.

“I’m a bit more awkward, and a bit more confident at the same time,” he says. “I was a bit more happy and naive back then; now I’m more cynical, but I know what I’m doing. Which is a better place to be, I think. It’s been a long journey. And luckily, in some ways I guess, I’ve had to earn it – but I don’t think that’s a bad thing.”

Liz Nugent: ‘People have accused me of being brave, but what is brave about surviving?’
10