New artist of the week: Zaska

Plus songs to hear from Bibio and Sim Simma Soundsystem 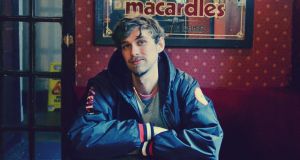 Zaska has committed to the band leader approach on his debut album It Takes a Village. Photograph: Dara Munnis

What Irish jazz enters a soulful pop era?
Where Wicklow
Why One of the fruits of the prevalence of music colleges in Dublin in the last five years is the emergence of jazz and its tributaries as a music of choice for discerning graduates. It’s no surprise that technically-honed players would gravitate towards international names like Vulfpeck, Badbadnotgood, and Snarky Puppy, bands that have brought jazz beyond the genre’s older chinstroking perceptions.

As a graduate of Newpark Music Centre, German-born Wicklow native Max Zaska has become a super-connector, a band leader spurred on by the improvisation of jazz with eyes, ears and hands keen on the parallel sounds of funk, soul and R&B.

Surrounded by talented friends and collaborators in Dublin and Wicklow, Zaska has committed to the band leader approach on his debut album and brings along some of the best like-minded musicians and voices who have emerged in recent years. Hozier himself has played with Zaska’s band and while he doesn’t appear on the appropriately-titled debut album It Takes A Village, his friends and colleagues are all over it.

Along for the ride on the 16-track album are the likes of Wyvern Lingo, BARQ, sisters Loah and Emma Garnett, Super Silly’s Precious Okpaje, Come On Live Long’s Louise Gaffney and Gypsies On the Autobahn’s James Smith, Little Green Cars and Booka Brass row in on an album that captures a scene and a sound on the up.

With over 25 artists involved, it could all be so easily be a case of too many cooks but Zaska’s vision and the overall exuberance and lack of studious fret action, along with social commentary on songs like My Body and It’s Ridiculous add a dose of realism to a fine escapist new jazz pop bacchanalia.

Since the English musician Steven Wilkinson joined Warp Records’ roster, he has released consistently superior music, whether it’s the beat-chopped beauty of 2009’s Ambivalence Avenue or the soulful funk and the soft-focus folktronica of recent releases. Curl, a once-off single is in the latter camp, a comforting lilt that harks to a calming pastoral walk.

The Dublin-based club night Sim Simma has branched out into original music that encapsulates their interests of dancehall, hip-hop and grime. The five tracks on the Pass The Aux Cord EP give new voices a chance to shine with great productions from Ben Bix and Semi-D. Man Like Me charges ahead with high-tempo percussive swing and sub-bass while Limerick-based MCs Denise Chaila and God Knows bring a thrilling energy to proceedings.