The week’s best rock and pop gigs: From Post Malone to Ennio Morricone

Plus: Example, She Drew the Gun, Micah P Hinson, Empire Circus among others 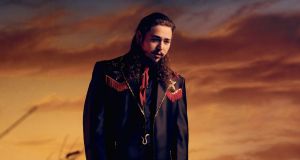 Jackpot Jive is a compilation of rare South African 45s from 1973-1982 that was mastered and cut by Aidan Foley and Hayley Connolly. Using the custom-built sound system and DJ booth in Hang Dai, the Chinese restaurant on Camden Street that transforms into a party spot late at night, those records will get an extra lease of life. DJs Lex Woo, who usually holds the fort in Anseo, and Connolly as Discomedusa, will be taking to the decks to soundtrack your bop. LB

Belfast DJ and producer Or:La has been based in Liverpool since 2012. In 2016 she released UK Lonely on Hotflush Recordings, her four-track debut EP, which toys around with techno, dubstep, garage and Afrobeat. She went on to co-found the label Deep Sea Frequency with Breakwave in 2017. Now she’s embarking on her Homecoming Tour in Ireland, which kicked off in Limerick last week, and you can catch her on the final night in Wigwam. LB

This is the first Telephones of 2019, so it would be frightfully rude to not show up. Plus it’s the end of Dry January, so there’s no reason to stay locked up inside on the weekends any more. For a fine selection of tunes covering all aspects of disco, soul, R&B, Afro, Latin, and house music, put your trust in DJs Papa Lou, Nevan Jio and JOMA to choose correctly. All you have to do is show up and dance the night away. LB

She Drew the Gun
The Workman’s Club, Dublin 8pm €12 theworkmansclub.com

“Junkyard Scouse soul built ingeniously on a Wirral council budget” – it doesn’t get any more perceptive than that, quite frankly. But there’s more, of course. Inspired by the likes of Courtney Barnett, poets Kate Tempest and Toria Garbutt, as well as old-school folk songwriters such as Malvina Reynolds (the writer of famous folk/pop tunes such as Little Boxes and Mornington Ride), She Grew the Gun’s frontwoman, Louisa Roach, applies a revolution-of-the-mind approach to her art, which she believes offers refuge from the average. Good band, cracking tunes. Go see. Support is rapidly rising Dublin spoken-word artist Natalya O’Flaherty. TCL

In a really fun, unattributed and non-cited fact from Wikipedia, London artist Example “was the third most downloaded artist in the dance music category after Cascada” in 2014. Since 2014 the Kickstarts singer has kept a lower profile but released his sixth album, Ballads & Bangers, last year. LB

Odette, from Sydney via Bath, has had music in her blood from the very beginning – her South African mother introduced her to the soul-funk music of Miriam Makeba and Angélique Kidjo, while her English father advised her of the acerbic pleasures of listening to The Clash and Billy Bragg. Adding hints of spoken word to her songs broadens its reach, all of which she will deliver tonight via songs from last year’s debut album, To a Stranger. TCL

Perfect is the debut album from Cork sisters Sophie and Laura O’Keeffe, aka Kudos, and their album has had quite the journey. Written and recorded on the very remote island of St Helena, slap-bang in the middle of the Atlantic Ocean between South Africa and Brazil, and mastered by Pete Maher (Katy Perry, Lana Del Rey, Kelly Clarkson), Perfect swings between piano ballads and delicate, sun-kissed electro-pop. Their Perfect Tour also sees them playing Central Arts in Waterford on February 14th. LB

Anyone out there with a preference for a swirling blend of shoegaze, psych rock, krautrock and post-punk would be well advised to check out this Brighton band. Toy have been around for almost 10 years. They have released four albums (the most recent, Happy in the Hollow, was released just over two weeks ago), each of which provides respite from much of the mediocrity that passes for contemporary rock. TCL

Brisbane’s Cub Sport make their Irish debut with a launch gig for their third, self-titled album. The alt-pop group have been on the go for almost 10 years and have become a regular presence in their native chart, as well as making an impact elsewhere. Why it has taken the group so long to pop over to Ireland is a mystery, but they’re here now, plugging the latest album, which has been on the receiving end of highly positive praise for its confessional tone and pop-friendly vibe. “A loved-up record,” opined Australian radio station Triple J, “that banishes fear through a celebration of identity, sexuality and spirituality – Cub Sport have delivered 2019’s first great queer album.” TCL

American rapper, record producer and songwriter Austin Richard Post is one of the major success stories of the past few years. The past three years have seen the 23-year-old rocket from relative obscurity to mainstream fame, with albums such as Stoney (2016) and Beerbongs & Bentleys (2018), but there hangs over his work what the Guardian described as “a paucity of original ideas, the sense that he has virtually nothing to say for himself, and that whatever he has, has already been said umpteen times before with considerably more skill, wit and impact”. Try telling that to the mass of fans at this sold-out show. TCL

Kneecap
Róisín Dubh, Galway €10 roisindubh.net The MC duo of Mo Chara and Móglai Bap from West Belfast at the forefront of merging rap with the Irish language. Taking on the PSNI and the gardaí, bouncers and Bláthnaid Ní Chofaigh, drugs and disenchantment with Irish life, they switch between Irish and English, using humour to push their songs forward. This Galway gig is sold out, but keep an eye out for future gigs because they’re ones to watch this year. Why? Is buzzers mór iad. LB

You might be thinking that the success of 24-year-old US singer and songwriter is like a bolt from the blue, but she has been mooching around music industry since she was a teenager. This year will most certainly be hers. We know this because her recently released third album, Heard it in a Past Life, is primed to catapult her into the mainstream with a collection of sprghtly electro-pop that references the likes of Björk and Sigrid. Special guest is Australian singer/rapper, Mallrat. TCL

In a decades-long career of so many highs and so much acclaim, it is difficult to know where to start. What is perhaps most relevant is that this could be the final time we will see Italian composer and orchestrator Ennio Morricone perform in Ireland. Now 90 years of age, it is perhaps unlikely that the renowned composer will once more undertake such a unique production of having more than 200 people on one stage. Then again, when asked what the future holds, he replied, “See you all in 10 years for the next big celebration!” So who knows? TCL

Memphis, Tennessee is renowned for its contributions to the world of music – from blues and country to rock’n’roll and soul, all shapes and sizes of the forms have been created and offered. Micah P Hinson was born in that city, but was raised in the Texan city of Abilene, which is where he first encountered the effect that music would have on him. Over the years (he released his debut album, Michah P Hinson and the Gospel of Progress, in 2004), the songwriter has developed apace, ensuring him a place at the same table as Wilco, Lambchop, Iron & Wine, and Conor Oberst. Yep – that good. Hinson’s second gig in Ireland is tomorrow, Saturday, February 16th, in Dolan’s, Limerick. TCL

Dublin band Empire Circus have been around the block, yet you can’t keep a good act down. This gig is the launch for their second studio album, Tí, the tardy follow-up to their acclaimed 2013 self-titled debut. Good things come to those who wait, it seems, as the album veers towards (and is perhaps slightly influenced by) sonically audacious and adventurous music by the likes of early Peter Gabriel, War on Drugs and Wilco. Special guest on the night is Dublin-based musician and producer Gavin Glass, who will be performing tracks from his latest album, Opus Pocus. TCL