Lou Reed the rock poet: When should songs be considered poetry? 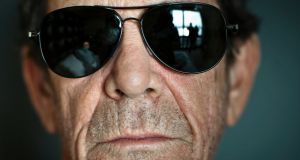 Lou Reed in New York in 2011: I’ll Be Your Mirror – The Collected Lyrics shows him to be a true rock ’n’ roll poet. Photograph: Chad Batka/New York Times

Faber & Faber’s forthcoming reissue of Lou Reed’s I’ll Be Your Mirror – The Collected Lyrics revives a question that’s been kicking around since Bob Dylan first elevated the lyric to the level of popular art form: should songs be considered poetry? It’s a point of debate that crawled back out of the crypt a couple of years ago when Dylan won the Nobel Prize for Literature. Naysayers called it heresy. Defenders quoted Homer.

Whatever way you look at it, Dylan’s triptych of mid-1960s albums – Highway 61 Revisited, Bringing It All Back Home and Blonde on Blonde – revolutionised what was possible in popular song. Like a Rolling Stone, It’s Alright, Ma (I’m Only Bleeding), Desolation Row and Visions of Johanna were so dense and complex, so intricately embroidered with literary and historical allusions – from formal American civil war language to Dylan Thomas and the Beats – it seemed like a new hybrid art form had been born.

Except there was always a precedent for the song-poem. One of the requirements of the bardic tradition, of court poetry, was that the words should be sung as well as spoken. Irish poets have always had a deep affiliation with the ballad: Patrick Kavanagh’s On Raglan Road and If Ever You Go to Dublin Town made for easy musical transpositions. Yeats’s lyric poems found musical expression in The Waterboys’ Appointment with Mr Yeats album. More recently, Paul Muldoon (who once co-wrote a couple of songs with the great Warren Zevon) published collections of lyrics written for his various musical excursions. In 2003, the late Seamus Heaney could be heard praising Eminem’s verbal virtuosity.

Still the question persists: when is a song a poem? Postwar African-American artists raised on a Harlem church tradition that inspired and empowered writers such as James Baldwin and Toni Morrison broke new ground through marrying the soul testimonial with protest poetry. The Last Poets reimagined talking blues as a seminal form of rap. Gil Scott-Heron’s state of the nation address The Revolution Will Not Be Televised provided a template for four generations of hip-hop, from Grandmaster Flash’s The Message to Public Enemy’s Black Steel, from The Disposable Heroes of Hiphoprisy’s Television (Drug of the Nation) to Childish Gambino’s This Is America. Hip-hop was born of the MC oral tradition, but when rap acts started releasing albums, those rhymes were preserved for posterity on record sleeves, pulled apart by journalists, probed by the FBI and stamped with “explicit content” stickers.

I never thought that I could sing or perform my poetry, it just evolved that way naturally

Read those lyric sheets now and there’s a strange kinship between Dre and NWA and Leonard Cohen’s The Future, written in the wake of the 1992 LA riots. Cohen was that rarity, an acclaimed poet and published novelist who sought financial stability in the music business when he realised rave reviews don’t pay the rent. Cohen, apprenticed in Hebrew liturgy as well as the Montreal coffee-house school of poets-with-attitude, wrote more poems that found a second life as songs (or vice versa) than any other musical artist.

Punk rock, too, drew on spit-and-brimstone traditions that went back to the Ranters, the Baptists and the Jehovah’s Witnesses. Patti Smith’s first single, Piss Factory, was spoken-word before spoken-word existed, streetwise storytelling set to sassy piano.

“Records are not meant to make literary landmarks, which is almost what happened with her first album,” said John Cale, the former Velvet Underground member who produced Smith’s celebrated debut Horses. “She became a popular success, but that’s not what it’s really made for.”

Smith admitted: “I’m not an academic-style writer, and even when I’m writing what I consider pure poetry I tend to find myself – the way I edit or work on it – speaking out loud. That’s just the way that I write. I never thought that I could sing or perform my poetry, it just evolved that way naturally, so I think that must be inherent in it. I wanted when I was a young girl to be a missionary and then a painter, but I didn’t really have the right calling. I found more and more as I went through my 20s that I was speaking what I was writing, I had a penchant for performing, and the rhythm of the words was very important. Didn’t Shakespeare say, ‘A sonnet is but a little song’?”

Smith wasn’t the only punk pioneer to take her cues from the French Symbolists, the noir novelists and the Beats. Her contemporary Jim Carroll’s memoir The Basketball Diaries was an instant cult classic, and he’d established himself as a Pulitzer-winning poet well before he released his first album, Catholic Boy, in 1980. Across the water in the UK, John Cooper Clarke became a recording artist almost by accident, opening up for punk acts and recording with Joy Division producer Martin Hannett. Simultaneously, Jamaican dub poet Linton Kwesi Johnson was forging early links between the Brixton set and gangsta rap, publishing song-stories such as Sonny’s Lettah in respectable literary anthologies.

Less celebrated, but seriously talented: the late David Berman, a published poet, and the acclaimed songwriter behind Silver Jews. Or The Cocteau Twins’ Liz Fraser, who concocted her own Hopkins-like onomatopoeic-speak, mining language for sound as much as meaning.

Many musicians will tell you the best songs are a seamless fusion of musicality and message, but for years university-educated rock critics focused relentlessly on the song lyric, maybe because it’s easier to parse even the most complex verse than evoke the impact of a guitar riff, string part or rhythm figure. Rock music is as much about the gut as the head. Consequently, many rock musicians come across as artistic idiot savants with a near-superstitious reluctance to deconstruct their own creative processes for fear of killing the golden goose.

You’re talking to somebody who was a fan of Ginsberg and Burroughs and Selby and Raymond Chandler. And Joyce for that matter

Lou Reed is different. He’s always had literary aspirations. A re-reading of I’ll Be Your Mirror reaffirms his status as one of the all-time great lyricists. The new edition’s multiple introductions (including one from Martin Scorsese) repeatedly classify him as a poet, albeit with qualifiers: a rock poet, a street poet, a punk poet. And Reed has achieved extraordinary narrative effects in songs such as I’m Waiting for My Man, Walk on the Wild Side and Street Hassle.

It’s worth noting that his teacher at Syracuse University was the poet Delmore Schwartz. Reading Hubert Selby Jr and William Burroughs under Schwartz’s mentorship, Reed experienced an epiphany of sorts: if a songwriter could mine the same subject matter exploited by avant-garde/underground poets or novelists, there might be no limits to what he or she could write about.

“Like shooting fish in a barrel, as they say,” he told me in 2000. “I mean, it was so obvious. It was this huge, huge area. For anybody who wanted to write, who liked rock, it was like the Atlantic Ocean there was so much of it. You’re talking to somebody who was a fan of Ginsberg and Burroughs and Selby and Raymond Chandler. And Joyce for that matter. Delmore Schwartz used to read Finnegans Wake aloud to me – not just me alone, but a bunch of us – and it was perfectly understandable, and very funny. You look around and say, ‘Let’s take a swing at Naked Lunch. Let’s do Last Exit to this and see what happens. There’s a lot of subject matter out there.’”

The New York album, released in 1989, might represent the high point of Reed’s literary ambitions. Essentially a spoken-word record bolstered by raw garage rock, its finest songs – Romeo Had Juliet, Halloween Parade, Dirty Boulevard – paint a devastating portrait of Manhattan on the turn. This was Reed’s finest period. A year later, his and John Cale’s mass for Andy Warhol, Songs for Drella, reforged a template that had previously been the preserve of musical theatre: the biography in song. It opened up possibilities that have scarcely been investigated or exploited since.

I’ll Be Your Mirror – The Collected Lyrics, by Lou Reed, is published by Faber. Peter Murphy performs and records under the name Cursed Murphy Versus the Resistance. His latest single, The Bells of Hell, is out now