And the Tallis Scholars delivered a masterful programme 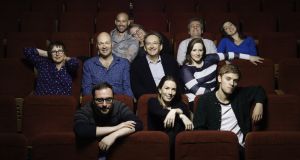 The music at two concerts I attended last week was separated by around 400 years. Those four centuries saw huge and fundamental changes in art, literature, fashion, transportation, society and technology, and all of that fundamental change was contained within the sound range of these two concerts.

With the exception of one recently commissioned piece, everything sung by renaissance specialists, the Tallis Scholars, in the National Concert Hall, was composed between the late 1400s and the 1630s, while the Irish contemporary music ensemble Concorde played nothing written before 2012 in their concert in the Scully Room (instead of the Hugh Lane Gallery) at the Dublin City Gallery.

Yet for everything that made them different, the two shared a common dependency across those four centuries: texts. Texts provide composers with inspiration and listeners with something to cling to, as they attempt to make sense of what they’re hearing. This applied strongest in pieces by composers from Hong Kong where Concorde is touring a programme of Chinese and Irish music next month. Although text-based, these were largely abstract in nature, expressive perhaps of an inner, hidden response by the composer.

A text about the moment you dip pure white satin into a coloured dye is a case in point. Dyeing (2017) by Alex Au Tin Yung, responds to Chinese philosopher Mo Di who, although he preferred the austerity and simplicity of the un-dyed silk, saw the act of choosing a colour as a metaphor for decision-making in general. Yung engages with this idea in his nine-minute piece for clarinet (Paul Roe), violin (Aoife Ní Bhriain) and cello (Martin Johnson), asking the listener to accept on faith the connection between philosophy and sound. In her spoken introduction, Concorde director Jane O’Leary seemed to be asking for the same thing, inviting the audience simply to listen without attempting to “figure it out”.

From the perspective of the listener, this was about one idea and the rest was pure sound. It was a pity that this sound was so similar to what came before it in what seemed a miscalculation of programming, creating the impression that the second piece might be a continuation of the first . . . and see it vanish (2012) by Chin Ting Chan (b. 1986) is anchored in a single note – a sort of one-note ritornello – which comes and goes, acting like a pedal, featuring long notes in one instrument against fleeting flourishes in another, and episodes that add a running base-line or some other form of contrasting material before returning to the anchor note. The character of both pieces seemed to be frustrated and pessimistic.

A third piece for the same forces, Silent Landscape (2017) by Yip Kim Fung (b. 1978), was inspired by verses about the mountains west of Beijing. Here the mood was quite different, featuring bursts of delicate energy, occasionally more robust, and widely spaced pizzicato plucks alongside clarinet glissandi, overall sounding exuberant while sometimes admitting a hint of sadness. This and Dyeing were world premieres.

Being less abstract, the Irish pieces gave you less work to do and as such were more immediately gratifying. The starting point for Linda Buckley (in her . . . downward in a freezing earth (2015) is the cold, remote landscapes of Iceland where she lived in 2014, via lines by the American poet David Haines writing about similar landscapes in Alaska in his short poem Listening in October. To Concorde’s trio, Buckley adds taped electronics that generate a sense of impersonal expansiveness and dark, rumbling depth, over which the cello and clarinet seem part of the static landscape while the little figures in the violin suggest the human witness, a role quietly taken over by all three performers who gently sing a note together as the piece ends. Perhaps Buckley draws on musical tropes for landscape in sound, but her choices create something deeper and more engaging than that.

Swelt Belly at Dawn (2013) is likewise a response to verses about landscape. Judith Ring wrote her own lines at a time when she lived near the sea, never tiring of the beauty of the sunrise. Her piece is appealingly programmatic, finding new ways to marshal instrumental timbres into music that shimmers with light, a light that grows incrementally and conveys warmth.

While we in the audience were swinging back and forth between the abstract and less abstract within these pieces, the players from Concorde were even-handed as well as expressively persuasive in their spirited delivery of the programme.

The texts underlying the programme by the Tallis Scholars were all biblical or liturgical. Interestingly, although these were provided in Latin and English, it’s possible that in this repertoire – Tallis, Palestrina, Josquin, et al – listeners felt no need to cling to words or to anything else, such is the enduring directness of communication which these composers mastered.

Over one season and a bit, the NCH has presented a number of eminent British choirs, of whom the Tallis Scholars achieved the strongest connections between scores and sound, sound and listener. They did this by adhering to their customary style of delivery, more reserved and English than open and Italian, while optimising their distinctive choral sound in service to the great masterpieces they performed.

Highlights included Tallis’s massive 40-voice motet Spem in alium, the ranks successfully bolstered by local singers. The small, four-voice Quam pulchra es by Costanza Festa provided the ideal programming contrast and was delightful. Allegri’s famous Misere could not disappoint, even in an acoustic so unimagined at the time it was first performed in the Sistine Chapel. And the second Agnus Dei of Palestrina’s Missa brevis delivered its extraordinary and timeless beauty.

Martina Cox: ‘In my eyes, Seán was always coming home’
6

Relic: The creepiest horror movie of the year
Real news has value SUBSCRIBE