John Wilson: ‘One day the conductor didn’t show up, so I just did it’

The principal conductor of the RTÉ Concert Orchestra fell in love with music in his high chair. He taught himself piano at a young age and formed a symphony orchestra at 16 before falling into the ‘terrifying business’ of conducting 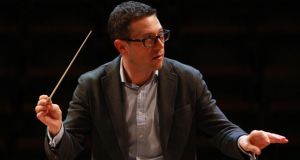 When I meet John Wilson, it is late in the afternoon, and he has just done six hours of rehearsals for a Gershwin gig with the RTÉ Concert Orchestra. He isn’t complaining. Music is more than just a career for the orchestra’s Gateshead-born principal conductor.

“I don’t remember a time when I wasn’t responding to music,” he says. “I was in my high chair, and whenever certain signature tunes came on the television, or when my dad put on certain records, I would rock myself out of my high chair, because I was crackers about music.

“When I was four, I would go straight to my granny’s piano when we went to visit her on a Sunday, and I was banging away. By the time I was five, I had figured out how to get around the piano. And rather than sign me up to a course of instruction, my parents just let me get on with it. When I was 11, I started to study percussion in school. That got me involved in practical music-making, playing the drums for amateur orchestras, theatrical entertainments, school things.”

Although he is self-taught as a pianist, there were years when he made a large part of his living from the piano. “I didn’t really learn to read music properly for a long time, not until I was well into my teens. I was held back on that front. But I guess it did allow certain things to come through unfettered, certain forms of musical expression.”

Being self-taught “also meant that nobody ever put any boundaries up for me. I could watch a Gene Kelly musical on a Monday and I’d get the full score of [Elgar’s] Caractacus from the library on a Tuesday. As long as it caught my attention and my imagination, it was music.”

As far as a career was concerned, “It was always going to be music . . . I do think there’s a certain breed of musician who couldn’t possibly contemplate doing anything else, and I’m one of them.”

Star of the Proms

In Britain he is known as the man who has brought vintage film music and musicals to the BBC Proms, but he says that the lighter end of the repertoire makes up only about 20 per cent of his work.

“Last week I was doing Vaughan Williams’s Fifth Symphony with the Philharmonic and Walton’s Cello Concerto with Steven Isserlis. The week before it was Elgar’s First Symphony with the National Youth Orchestra, I’ve got Mozart with the RTÉ Concert Orchestra coming up here, and then Copland with the BBC Philharmonic after that. The RTÉ CO aside, I really only do light music now with my orchestra,” that is, the John Wilson Orchestra, which has made him such a star of the Proms.

Everything he did in his youth seems to have fed productively into everything else. “When I was playing the piano as an amateur, while I wasn’t Maurizio Pollini, I was kind of a useful pianist. And people started ringing me up: would you play for my trumpet exam; would you play for the rehearsal of Desert Song; will you play the organ in the church?

“So, while it was never my serious study, and I was playing percussion and timpani in orchestras, it was the piano-playing that introduced me to the musicians who then helped me blossom as a musician.”

Before all that, however, when he was playing piano for rehearsals, “one day the conductor didn’t show up and I was asked to do it. So I just did it. I conducted No, No, Nanette when I was 15 with a 12-piece orchestra. And the fit seemed right. I was good at organising things.

He makes it sound like an obvious, everyday thing to do – see the gap and fill it – even though the idea of setting up an orchestra and conducting it in Respighi tone poems as well as symphonies by Tchaikovsky and Brahms would be well off the radar of most 16-year-olds.

He describes his lucky break in the same, almost matter-of-fact way. “When I was in college, in the early 1990s, there was a move for light music to be taken seriously, ie that it wasn’t just nostalgia. And Eric Coates’s son chose me to conduct the first new CD recordings of his father’s music. And that was the start for me, really.”

The musicians who work with Wilson describe him as an exacting perfectionist. “I’ve been associated with the Concert Orchestra for longer than people think. It might be my 12th year. I did quite a lot of guest conducting before I got the job here. There’s always been a ‘let’s make it as good as we can’ attitude. It’s knowing what you have to do to make that happen, to make it good. That’s the tricky thing.

“My approach in rehearsal is evolving. When it started, I was really, really, absolutely insistent on ensemble, on intonation, on quality of sound, style, coming off this note exactly here, getting this absolutely together, which part of the bow to be in, lots and lots of string rehearsing.” The kind of detail that Simon Rattle calls “the dental hygiene”, says Wilson.

And now? “Working on sound is a continuous thing; working on blend of string sound. We’re always working to find the best way of delivering the music to the audience, which can be a fiddly, technical thing. Bowing: we spent ages today working on bow speed, and different kinds of bow articulations, listening to each other.”

He finds what he calls “a lovely attitude in the orchestra, where people now can see that it’s evolving and that the standards are higher. They really want to be pushed. And it’s pretty relentless, sometimes. It’s not just me. They push themselves.”

He see the conductor as someone who needs to have “a formidable musical personality and presence”, and says that technique has become more and more important.

He explains conducting technique as “being able to express the music through your hands, and for your beat to be specific to the music. Whenever I’m taking a rehearsal or doing a concert, I’m always aware that it’s an opportunity for me to try to improve that distillation process, where what you’re doing with your hands is as appropriate as possible, so that your beat is loaded with information to help the musicians.”

He quotes Rattle again, to the effect that you don’t start until you’re 60. “I do feel that, although I’ve done nearly 2,000 concerts, I’m just at the starting gates, really. You amass all this experience and knowledge, and you realise just how far you’ve got to go and just what a terrifying business it is.”

LIKE A FISH NEEDS A BICYCLE: WILSON’S WISE WORDS