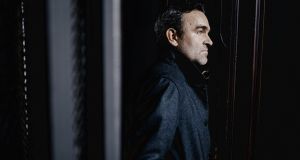 German composer, clarinettist and conductor Jörg Widmann, principal conductor of the Irish Chamber Orchestra, is one of the most energetic people I’ve come across. The first time I met him for an interview, he had been up all night composing, seemed fresh as a daisy, and was happy to talk music into the wee hours without flagging.

Yet his experience of Covid-19 lockdown is not all that different from other people’s. His voice has a sense of wonder as he explains, “I always wanted to have some months off, when I could compose without interruption. Now I’ve had several months, and I could hardly work. Isn’t that strange?”

I put it down to the fact that the whole experience has been in some way so shapeless. Who knows how long it will last? Or how our daily lives will be looking in six or 12 months time? He likes the word shapeless, and, as he later puts it, the big challenge of these last months has been, “to deal with the nothing. To create your own shape. And still I failed.” He quotes Beckett, “Ever failed. No matter. Try again. Fail again. Fail better.”

It does become clear, though, that he has actually managed to get back to composing. And on the day that I spoke to him he was working as a performer again, in Austria, conducting Salzburg’s Mozarteum Orchestra. “Salzburg with all its magic, but not many people,” he says. “It’s nice.”

From a concert-less Irish perspective, an event with an audience as small as 160 is a prospect that seems very tantalising indeed. “You’re not allowed more,” he explains, “and of course onstage there are also some regulations. But it’s so wonderful to make music again. Such a relief!”

Earlier, in Berlin, he also worked on a project with Daniel Barenboim, writing one of ten specially commissioned “Corona compositions” — the description is Widmann’s not Barenboim’s. The Festival of New Music in Berlin’s Pierre Boulez Saal, which Barenboim jointly curated and performed in with Berlin Philharmonic flautist Emmanuel Pahud, presented the new pieces over four concerts, with each programme also including works by Boulez.

The stipulation was for pieces between five and 15 minutes long, for no more than 13 players, because of the distancing rules. Widmann’s new piece, empty space, is a slow, broody work for five players, with the musicians spread around the venue, playing in the aisles as well as on the stage, like separate, haloed islands in the otherwise dark and empty venue. Widmann played clarinet in his new work, too, and says, “We missed the audience. And I hope the audience misses us, too.”

He also misses the Irish Chamber Orchestra. “It’s like a family,” he explains. “I wrote a letter to them, a long letter. I really felt I should. They were so wonderful. On my birthday they sent me a birthday video which almost made me cry. They made fun of me in the most original way.

It started with each one in their own home, and they made a kind of collage of sounds from my pieces, all kinds of modern, avant-garde sounds. Which turned out to be Happy Birthday. It was so wonderful. At least on this level we can communicate. But I can’t wait to make music with them again.”

Widmann played his last pre-lockdown concert in the Gewandhaus in Leipzig on March 1st, after which he had been due to go to Japan. “That had already been cancelled, because Asia was already in lockdown. There were upcoming concerts in my residency in Carnegie Hall in New York, which were cancelled. I was supposed to write a piece for my other residency in Barcelona, at the Palau de la Música. I wanted to write Catalan folk songs for the choir there. I could have written it. But for some reason I didn’t. It was a very, very strange time. It’s bizarre. We’re not used to it. And of course it’s something invisible. You can’t see the danger.”

It was really interesting, walking without a destination, without knowing where you want to go

He muses on the fact that concerns about the way speaking and especially singing can increase the transmission of the virus have meant that “Choral singers are treated like criminals, just for doing what they do so beautifully. They are only considered as a danger right now.” He’s also aware that in a place like the generously culture-supporting Germany “we are still in a way privileged. There are people for whom this is a disaster. The little restaurants around the corner which will have to close.”

In the absence of work commitments, “I went for many walks. I discovered my home city, Munich, from different angles. It was really interesting, walking without a destination, without knowing where you want to go. You just start walking. It was wonderful. But you know, the clarinet was in the case for some weeks. And the composition was on hold as well.

“I exaggerate a little bit. I still composed a whole string quartet, my String Quartet No. 10, for the Juilliard Quartet.” But his overriding experience was “finally there is time, and I found myself doing almost nothing with it.” And on the other hand he knows people — he mentions the composer and conductor Péter Eötvös — “who were more productive than ever” rather than “paralyzed”.

While he lagged at composing and performing, he blazed as a listener. “In that regard it was a very productive time. I listened to videos I didn’t know, loads of performances by Herbert von Karajan, Karl Böhm, and lots of documentaries. I listened two days and nights in a row almost, to Wagner’s Liebestod, like in ecstasy, Jessye Norman with the Vienna Philharmonic under Karajan. And the rehearsals, too. She’s at the first rehearsal with Karajan, and he won’t let her sing. He makes her listen. And he always tells the orchestra softer, no, too loud, softer. And he didn’t even want her to sing in the dress rehearsal. I listened to an incredible amount of music. Miles Davis a lot. More than ever, really.”

The ICO, of course, is in a live performance limbo. As CEO Gerry Keenan explains, in March they got less than a day’s notice that the University of Limerick, where their studio and offices are located, was shutting down. “Bar going back now and then to pick up piece of equipment, or CDs and things, we haven’t been back since. It’s a long time.”

There is, he says, “a massive sense of frustration. You spend a long time trying to put a year together, getting all your ducks in a row with soloists and everything else. Then it just crashes and burns. It’s the same for everyone else.”

Tours in Ireland and Germany have been cancelled, though “We have had little things to keep us going. One of them was hugely challenging, Irish National Opera’s Seraglio. While we didn’t do the whole opera, we did over 40 minutes of music, effectively with no rehearsal at all, and everyone just recording on their iPhone and looking at a video screen with conductor Peter Whelan waving at them. The results turned out to be really quite good, considering how it was done.”

A lot of the players, he says, have been “really good at engaging online. And we’ve done a lot of what we would call community work, going in to care homes, the hospice here in Limerick, and in Cork and Dublin. We’re involved in Kilkenny Arts Festival, and we’re waiting to see if eight of our guys, like Nicky Sweeney and Anna Cashell who live in the UK, will be affected by the two-week quarantine. We don’t know yet whether that will be lifted.”

The Arts Council’s swift intervention in March has meant that the players, who work on contracts rather than salaries, continue to be paid, though they will have lost large tracts of their other work. “The long-term damage to this business,” says Keenan, “and the uncertainty of return are very hard to deal with.” His goal is that they can get back to “what we spent all our life trying to do, to engage audiences, to play great music for them, to bring them joy.” He’s planning to have the orchestra back performing at the University Concert Hall in Limerick in September.

When Widmann talks of the ICO’s freshness, dynamism and “edge of the seat” energy, he is a great salesman for the orchestra. Pre-Covid-19, he says, “We were in such a fantastic flow.” And the possibility of losing that is what he sees as the greatest danger facing his work here. “But I know my orchestra. Their mentality, they are so strong. We will not start from zero again. You know, when they sent me the video, it’s a stupid word, but really, what I felt is love. Everybody can feel it in the ICO.”

Jörg Widmann’s empty space and all of the Festival of New Music commissions are available for free on www.boulezsaal.de until Wednesday, August 12th. Katherine Hunka directs the ICO in concerts of Piazzolla and Vivaldi at Kilkenny Arts Festival X on Sunday, August 16th. Details at www.kilkennyarts.ie

Battle of Cable Street: when the Irish helped beat back the fascists
9