The rapper has said a lot of odd things over the years, but this is the strangest yet 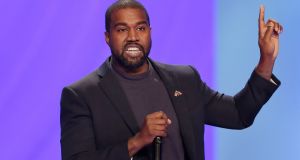 Kanye West has announced on Twitter he will run for president, and his organisational mode for the White House is allegedly based on the secret country of Wakanda in Black Panther. Photograph: Michael Wyke/AP

Kanye West is a man with plenty of opinions; always has been. He is no stranger to lavishing hyperbolic praise on himself, either. Among his most famous utterances are, “My greatest pain in life is that I will never be able to see myself perform live,” and “I’m the number one human being in music.”

His ambition of course yielded some formidable music, making him one of the most critically acclaimed artists and innovators of the Noughties. Some might say he was even being a little modest: lauded as a wellspring of creativity and ingenuity, West has long been known for delivering a live show of pure theatre.

And now, that ambition – or, some might posit, vanity – has reportedly landed him in the 2020 presidential race. After announcing that he would run for office at the 2015 MTV Video Music Awards, the rapper is coming good on his word.

I would run as a Republican if Trump wasn’t there. I will run as an independent if Trump is there

An interview with Forbes magazine, published this week, laid bare West’s latest political aspirations. With guidance from Elon Musk, West is reportedly running under a new banner, the Birthday Party. His idea of an organisational model for the White House is allegedly based on the secret country of Wakanda in Black Panther.

“Like anything I’ve ever done in my life,” says West, “I’m doing to win.” As it happens, this statement was probably one of the less outré quotes that made the interview.

“I would run as a Republican if Trump wasn’t there. I will run as an independent if Trump is there,” West revealed, before noting that he no longer supports US president Donald Trump.

On wearing a Make America Great Again hat at the White House to discuss prison reform, West noted elsewhere in the interview: “One of the main reasons I wore the red hat [was] as a protest to the segregation of votes in the Black community. Also, other than the fact that I like Trump hotels and the saxophones in the lobby.”

West also revealed that he has never voted in his life. He believes that “planned parenthoods have been placed inside cities by white supremacists to do the Devil’s work”, and that vaccines are the “mark of the beast”.

Many online commenters have dismissed the interview as a publicity ploy (Monica Lewinsky tweeted: “Are we making bets yet that the KW run is a reality show stunt?”).

Yet several media outlets, among them XXL magazine, TMZ and the Sun, have reported that West is in the middle of a “serious bipolar episode”, and that his family are “worried” about his recent actions. (West revealed he had been diagnosed with the condition in 2018 while promoting his album Ye, and doesn’t like to take medication for the disorder because it “stifles his creativity”. Later that year, he claimed that he had been misdiagnosed.)

It’s still unclear whether a possible health condition and his decision to run for the presidency are connected, but it’s safe to say that West has long been politically minded. However, his political stance isn’t clear-cut, and has probably shapeshifted down the years. With a former Black Panther for a father (the photojournalist Ray West), it’s perhaps safe to assume that West’s upbringing may at least have been left-leaning.

Five years ago, West’s wife, Kim Kardashian, endorsed Hillary Clinton during the 2016 presidential race with a selfie, in which West can also be seen.

Yet in more recent times West has voiced his wholehearted support for Trump (the two, West has observed share “dragon energy”).

Many of his political comments since have earned criticism, such as his claim that slavery was a “choice”, and his description of Black Lives Matters protestors as “whiny toddlers”.

“People expect that if you’re black you have to be Democrat,” West said during an official visit with Trump at the White House. “I’ve had conversations that basically said that welfare is the reason why a lot of black people end up being Democrat.” In 2011, West’s song New Day contained the lyrics: “And I’ll never let my son have an ego/ He’ll be nice to everyone wherever we go/ I mean I might even make him be Republican/ So everybody know he love white people.”

Yet rewind via time’s giant wheel to 2005, when West unleashed a tirade against (Republican) president George W Bush on NBC’s A Concert for Hurricane Relief, following the devastation of Hurricane Katrina. Ignoring the teleprompter, West was moved to proclaim: “George Bush doesn’t care about black people.” (Years later, West apologised to the former president.)

For now, it’s unclear as to whether West has officially thrown his hat into the ring, and has not declared his party affiliations yet.

The BBC has reported that on the Federal Election Commission database for the upcoming presidential election, the name “Kanye Deez Nutz West” is registered since 2015. The candidate’s reported address? “1977 Golddigger Avenue, Suite Yeezus.”

As with most things Kanye West does, watching the near future unfold is going to be little short of compelling.