Taylor Swift has dialled up the sweetness – and the politics

New single You Need to Calm Down. "Good you’ve made up with Katy Perry.. But don’t lose the grit" 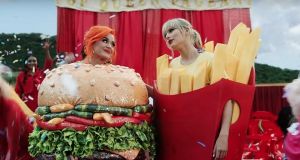 The most remarkable moment in the video for Taylor Swift’s new single, You Need To Calm Down, is right at the end when the biggest pop star of her generation smiles wistfully whilst dressed as a giant carton of chips.

This is incredible. And not simply because Swift has chosen to see out the song, a pro-LGBTQ plea for peace and understanding, done up as a 2am SuperMacs takeaway.

What’s most striking is that next to her, dressed (of course) as a giant hamburger, is another of the biggest pop stars of their generation, Katy Perry. In pop terms, it’s the equivalent of Nixon going to China (dressed as a snack box) or the Night King and Jon Snow having a cuddle (with either, or if we’re lucky both, cosplaying as a punnet of curried fries).

As celeb watchers will know, Swift and Perry have been embroiled in one of music’s highest profile, if slightly mysterious, feuds for over half a decade. The falling-out previously inspired Swift’s 2015 hit Bad Blood. There, she essentially told Perry the rift was super-personal and she wouldn’t be getting over it any time soon.

Perry is believed to have hit back two years ago with Swish Swish. That ditty arched its back with lyrics such as “So keep calm, honey, I’m a stick around/For more than a minute, get used to it.”

The ... erm bad blood apparently flowed from a row over backing dancers and clashing tours in 2013. But now here they are, a Perry burger and TayTay chips, together as the almighty intended.

Swift had set us up for a surprise, promising on Instagram the video had a “lot going on”. Perry’s appearance also makes clear why the single came out on Friday with the video held back until Monday.

You Need To Calm Down is perhaps Swift’s most political release to date. It deserved to be judged on its anti-cyberbullying merits – rather than as the backing accompaniment to her reconciliation with Perry. Which is how it would have been received had she put both out simultaneously.

She is clearly serious-minded about the song and about advocating for the LGBTQ community. Swift emphasised this by appearing at the Stonewall Inn in New York – often perceived as the beating heart of the gay rights movement – on Friday for a surprise performance. You Need To Calm Down, moreover, is extremely explicit in what it’s being explicit about.

“Why are you mad when you could be GLAAD?” Swift sings – referring to the American gay rights advocacy group. She would seem to be remonstrating with online homophobes dishing their vitriol, though in the video they’ve morphed into a hairy mob. Armed with offensive placards, the trolls shriek at Taylor and her glamorous friends, among them Ellen Degeneres, Adam Lambert and Queer Eye’s Tan France.

The track, and yes there is one at the centre of all this, is shimmery and quietly catchy. And it’s not at all angry, as the worst protest music tends to be. The video’s candy hued tones and fanciful trailer park backdrop, as marshalled by director Drew Kirsch, meanwhile conjure a Willy Wonka-esque Neverland. And that’s before Swift troops out dressed as a singing bag of chips.

This is all hugely promising as we count down to her next album, Lover, out in August. It is certainly in pleasing contrast to the wrathful TayTay pouting and grimacing through Look What You Made Me Do, her last big, out-of-nowhere “drop” (from 2017’s Reputation).

Nor, it should be acknowledged, has her reconciliation with Perry exactly tumbled from the clear blue sky. Perry is reported to have sent Swift flowers last year before the Reputation tour. Last week Perry posted on Instagram of cookies sent to her by Swift, which she tagged with “peace at last”. A detente has evidently been in progress for some time.

Amid the hugs, smiles and Styrofoam fast-food is it wrong, then, to feel slightly concerned that Swift has dialled up the sweetness? You Need To Calm Down is an important and laudable release. It will go at least some distance towards satisfying those who have urged Swift to put more politics in her pop.

Still, some of us may cross our fingers that, along with the glitter, Taylor has remembered how to do gritty. Her best songs – Bad Blood among them – are hard-punching and relentless. As a pop star, Swift’s ferocity, in her lyrics as well as her music, has long been her most transgressive quality. Here’s hoping she hasn’t washed it out of her system.