Is Dublin finally getting a Handel on the ‘Messiah’? 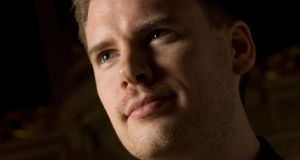 Benjamin Hulett: soloist sounded at all times as if he owned the music.

The Irish public, it seems, can never get enough of Handel’s Messiah. It’s bankable for choral societies at any time of the year, though the traditional December slot is still the favoured spot.

Our Lady’s Choral Society is leader of the pack in Dublin, just as the Belfast Philharmonic Society is in Belfast. Our Lady’s takes up three nights at the National Concert Hall every year, and the Belfast Phil does two nights at the much larger Waterfront Hall. Before the National Concert Hall opened in 1981, Our Lady’s Messiah was a peripatetic event, and the choir once even hired the main hall of the RDS, a venue that would comfortably swallow up the entire three-night audience at the NCH and still have seats to spare.

Dublin takes pride in being the city that hosted the first performance of Messiah, conducted by the composer back in 1742, and Our Lady’s mark the occasion every year with an open-air performance on Fishamble Street, where the original venue once stood. The entrance arch, next door to the Contemporary Music Centre – in front of which the performance takes place – is all that remains of the original Musick Hall.

For all the strength of the association of Messiah and Dublin, the city’s tradition in performances of the oratorio is not exactly what you would call world-leading. Think of Finland’s Helsinki Festival, which has a tradition going back to the 1950s of featuring different soloists each year in a performance of Sibelius’s Violin Concerto.

There have of course been Dublin airings of Messiah that have stood out, among them the collaborations between the National Chamber Choir (today’s Chamber Choir Ireland) and the Irish Chamber Orchestra, and the period-instruments performances presented by the Irish Baroque Orchestra with Mark Duley’s Resurgam choir.

Although RTÉ has not generally been in the business of presenting Messiahs, it was the promoter of two very special performances. The first was given in 1988 by the sadly long-defunct RTÉ Chorus and the RTÉ Concert Orchestra under Harry Christophers at the Royal Hospital Kilmainham. It was Christophers who first definitively brought the spirit of period-performance style to the work in Dublin.

The second was at the NCH last Friday, when Mark Hindley, chorus master of the RTÉ Philharmonic Choir, stepped out of the shadows and mounted the podium in front of a reduced RTÉ National Symphony Orchestra, for a supple and splendid performance that reinforced the Philharmonic’s status as the leading large-scale chorus in Dublin.

Light on their toes

The delicacy he achieved also impacted at the other end of the scale. When the choir let it all hang out, the sheer glory of the effect was all the more impressive for the restraint which had preceded it.

The evening’s star soloist was tenor Benjamin Hulett, who sounded at all times as if he owned the music, and his every last word mattered. Mezzo soprano Sharon Carty sang with beautiful Handelian style, but without the same communicativeness as Hulett. Bass Gavan Ring, though stronger on communication than musical style, was always fully engaged. Soprano Giselle Allen, impressively operatic when in full voice, was simply not geared up for the filigree of Handel’s writing.

In the end, though – even in spite of a stylish contribution from the NSO – it was the choral singing that will remain in the memory. It’s been a paradox for more than 30 years that Dublin’s best large choir has been kept away from Messiah. Here’s hoping it won’t be too long before they come to perform it again.

Homecoming gathering at the NCH

From a musical standpoint, it was a mixed bag, not so much a matter of any individual failings, but rather of individual strengths not always combining successfully in pursuit of a unified goal.

For me, the greatest rewards came in the middle concert, a meltingly beautiful account of Boccherini’s Quintet in E, the one with the famous Minuet (from Ioana Petcu-Colan, Mia Cooper, Lucy Nolan, Brian O’Kane and Yseult Cooper-Stockdale), and a hauntingly reserved performance of Schubert’s great Quintet in C (Mairéad Hickey, Anna Cashell, Neasa Ní Bhriain, Christopher Marwood and William Butt), where the expressive potency was all the greater for the wisdom of the understatement.  mdervan@irishtimes.com