Only Australia’s brilliant, odd, Kate Bush-style entry stands out on a night of dull performances 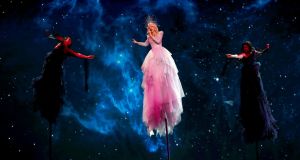 As a rule of thumb, the worse the Irish song entry is, the more I anticipate the Eurovision Song Contest. And given that this year’s homegrown entry is the sonic equivalent of cold Lush Bath Bomb water, I was particularly intrigued as to how tonight might go.

Yet as befits tradition, there were extravagantly coiffed men and huns with luxuriant tans waving their national flags with the enthusiasm of schoolkids, and an audience baying for a spectacle that would make the recent “camp” Met Ball look like Sunday School.

In the end, Israel delivered the most flatly glossy nothing-to-see-here-folks ceremony in recent memory. Their opening performance, high-octane though it was, was more of a vehicle for last year’s winner, the kimono-clad beatboxer Netta Barzilai.

Still, with the bar set sufficiently high, would the first 17 entrants to grace the Expo Tel Aviv be able to keep up the momentum?

In contrast to last year’s ceremony, which was stuffed to the rafters with stone-cold dance bangers, a slew of low-calorie ballads clogged up the first semi-final.

The televisual links breaking up the performances traditionally showcase the bounty of local landmarks, but clearly the boardroom brief here was along the lines of “a travel brochure, but trendy and that, for the Insta generation”.

“Open a packet of crisps, sit back, don’t vote and just relax,” Marty Whelan suggests. In the end, we didn’t really have much of a choice.

Finland’s Darude, a dance music veteran known for his 2000 track Sandstorm was arguably the night’s first talking point, and not just for his leather chaps. Poland’s Tulia trio, dressed as scarlet witches, delivered something of an interesting earworm (Marty’s somewhat unorthodox take: “That was like something from Macbeth”).

But, alas, the energy and momentum took a dip after that. Slovenia’s Zala Kralj and Gasper Santl – two photogenic youngsters effectively undressing each other with their eyes – performed a low-energy song worthy of a terrible teen movie soundtrack.

Montenegro’s D Mol’s entry sounded for all the world like a rejected S Club 7 B-Side, while the Belgium entrant Eliot’s reed-thin voice and ballad threatened to turn the entire night into a pedestrian non-spectacle.

Praise ye gods, then, for the Australian Kate Miller-Heidke, whose self-penned song Zero Gravity was a glorious, campy return to familiar Eurovision ground. This Kate Bush-inspired oddity, complete with Glinda costumes and low-budget special effects, is precisely the sort of brilliant madness we all watch for.

Likewise, Iceland’s fetish-goth outfit Hatari delivered the sort of so-wrong-they-right elements that have seen them become one of the most talked about acts this year: a bloke hammering stuff! Coloured contacts! Torture Garden gear! Electro metal! Total and utter indifference at making the final!

As mid-show entertainment goes, Dana “Kardashian” International’s watery version of Bruno Mars’s Just The Way You Are was no Riverdance. Still, kudos to tonight’s organisers, who fashioned a mashup song from remnants from the contest’s 63-year history (with appearances from Johnny Logan and Gerry Ryan).

Intriguing snippets from the Spanish, French and Israeli entries, all automatically qualified for the final, were all bang-on Eurovision brief: brash, bright, colourful, infectious.

Sadly, these all-too-brief snippets only serve to show up some of the ostensibly “modern” pop entries for the half-baked crud that it is.