Iggy Pop takes a bite out of U2 over Apple deal 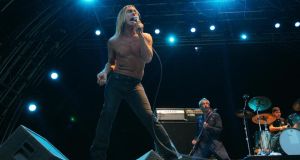 Rocker Iggy Pop has hit out at the modern music industry which he said is “laughably maybe almost entirely pirate”, but said he understands that some music fans who access tracks for free do so because they have been “totally left out, screwed and abandoned”.

The former Stooges frontman and successful solo artist also criticised U2 and technology giant Apple for their recent partnership when they gave away the group’s latest album for free.

He said they had stolen the listener’s choice in whether to download and buy the music or not.

“Part of the process when you buy something from an artist. It’s a kind of anointing, you are giving people love. It’s your choice to give or withhold. You are giving a lot of yourself, besides the money,” the 67-year-old told the audience in Salford at the annual lecture in honour of the late BBC broadcaster John Peel.

“But in this particular case, without the convention, maybe some people felt like they were robbed of that chance and they have a point. It’s not the only point. These are not bad guys.

“But now, everybody’s a bootlegger, but not as cute, and there are people out there just stealing the stuff and saying don’t try to force me to pay. And that act of thieving will become a habit and that’s bad for everything.

“So we are exchanging the corporate rip off for the public one. Aided by power nerds. Kind of computer Putins. They just wanna get rich and powerful.

“And now the biggest bands are charging insane ticket prices or giving away music before it can flop, in an effort to stay huge. And there’s something in this huge thing that kind of sucks.”

Pop, who is often seen as one of the pioneers of punk, said the development of new digital devices has seen people become estranged from their morals, allowing them to “steal” music.

But despite his criticism of the workings of the industry during his speech on the subject of “free music in a capitalist society”, Pop said he empathised with people struggling in a time of financial hardship.

“So is the thieving that big a deal? Ethically, yes, and it destroys people because it’s a bad road you take. But I don’t think that’s the biggest problem for the music biz. I think people are just a little bit bored, and more than a little bit broke. No money.

“Especially simple working people who have been totally left out, screwed and abandoned. If I had to depend on what I actually get from sales I’d be tending bars between sets. I mean honestly it’s become a patronage system.

“There is a general atmosphere of resentment, pressure, kind of strange perpetual war, dripping on all the time. And I think that prosecuting some college kid because she shared a file is a lot like sending somebody to Australia 200 years ago for poaching his lordship’s rabbit.

“That’s how it must seem to poor people who just want to watch a crappy movie for free after they’ve been working themselves to death all day at Tesco or whatever, you know,” he added.

Pop follows figures such as Pete Townshend, Billy Bragg and Charlotte Church in delivering the BBC Music John Peel Lecture. This year marks a decade since the death of Radio 1 DJ and music champion Peel.

The Passenger and Lust for Life singer, whose raw performances are seen as a major inspiration to the punk movement of the mid 1970s, also paid tribute to Sir Richard Branson who he described as a “good guy” after signing him to his Virgin Records music label.

Pop, who is famed for performing shirtless, is a presenter of a weekly two-hour show on the BBC’s digital service 6 Music. The lecture was broadcast live on the digital channel and will be screened by BBC4 on Sunday.