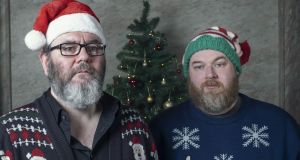 On Christmas Day last year, Aidan Moffat sat down with his 10-year-old son and told him the truth about Santa Claus.

“It’s a very emotional day for children and he’d had an argument with two of his cousins about some presents,” recalls the Scottish singer, as wry in person as he is miserable on record. “Santa had bought presents for him and not for them. He got upset about it on their behalf.”

So Moffat took little Samuel aside and let him in on a secret about Santa.

“He went silent for a good half an hour. Me and his mum sat on the bed with him and we all had a cuddle. The next day, he started to come around. He realised he knew something the other kids didn’t.”

Tears, cuddles and secrets – for many, that’s Christmas in a nutshell. It is also the essence of Moffat as a songwriter. Somewhere between beat poet, reluctant troubadour and lonely drunk recently dumped by text message, he sings about heartache, romantic and otherwise, as though it were a second language.

Given his affinity for misery and kitchen sink melodrama, it was perhaps inevitable the former Arab Strap vocalist would one day get around to making a seasonal record. This year, he and his new long-term collaborator, RM Hubbert, have done just that, with Ghost Stories for Christmas.

“All I’m really interested in is making people cry,” laughs Moffat. “A couple of people have shed a tear when listening to the title track [A Ghost Story for Christmas]. I was happy about that. If we’re going to do a Christmas song it has to move people to tears at least once.”

There are two kinds of Christmas records, he says. The novelty ones that drive you crazy at the supermarket. And the ones that cut you in two with their chronicling of the betrayals, lies and accumulated resentments that become so much more acute and difficult to forgive this time of year.

Ghost Stories for Christmas is obviously, and very much, in the second category. As was Moffat’s intention, the title song especially is bare-knuckle with baubles on.

It begins with the narrator negotiating his first December 25th after the departure of a great love – her fate a mystery. “Does he mourn for every quarrel, every fight and each mistake?” croons Moffat. “Another silent night in bleak midwinter . . . getting drunker, getting skinter.” The lyrics conjure with misery the way a party entertainer conjures with bendy balloons – with results that feel like A Christmas Carol as filmed by Ken Loach.

“A good Christmas album has to be emotional, fun to listen to but also interesting. A lot of Christmas records are awful. They are full of cover versions, are really cheap, they haven’t put much effort in. They’re really just there to shift units.”

Christmas albums, as he intimates, work best when acknowledging the season of joy is also the season of stress, bickering and simple anti-climax. With Fairytale of New York, for instance, it is the accumulated bile that gives the perennial Pogues dirge its ugly power.

Similarly, Wham’s Last Christmas is beloved because of, not despite of, the self-pity it flaunts like a novelty sweater. As you will dimly recall, the video finds George Michael trapped with an ex-girlfriend on the skiing holiday from hell. Wounded glances are traded under the tree and then George stares into the frozen wastes from within the world’s saddest parka. It is devastating.

The lesson goes back decades. White Christmas, the best-selling single of all time, was written in 1942 by a secular New York Jew, Irving Berlin, for GIs fighting overseas and dreaming of home. It is Christmas incarnate, yet as maudlin as a platter of Smiths LPs.

“Economically, the country was up the creek,” remembered Jim Lea, the band’s bass player, and the tune’s composer. “The miners had been on strike, along with the gravediggers, the bakers and almost everybody else. I think people wanted something to cheer them up – and so did I. That’s why I came up with the line ‘Look to the future now, it’s only just begun’.”

“That song is absolutely perfect,” says Moffat. “There was something very magical the day they made it. They made it in the summer too. Much like us, they spent their time in shorts and T-shirts.”

Moffat embodies the aphorism that misery loves company. Twenty years ago, he enjoyed an unlikely flirtation with pop celebrity when Arab Strap, his drizzle-flecked collaboration with instrumentalist Malcolm Middleton, created a buzz with their debut single The First Big Weekend. The track was a banging anthem about going out and drinking too much. Its genius lay in how it spliced the throwaway (way-hay, cider!) and the philosophical (is this as good as it gets?).

Ghost Stories for Christmas is just as profound, when it wants to be. But it counterpoints the soul-baring with scalpel-sharp humour. There is a wistful cover of Yazoo’s synth sob-a-along Only You and a tilt at Mud’s Lonely This Christmas.

The result is the best sort of hodge-podge – a record that swings from highs to lows, celebration to misery.

“That’s a bit like Christmas itself. People can forget the downside. It isn’t always full of joy. The best Christmas albums have a tinge of sadness in them.”

Could Moffat imagine writing his own Merry Xmas Everybody – a mistletoe anthem precision-tooled for dancing on the table and throwing streamers to?

“Well, I’m just like Santa,” he says. “A big, jolly fat man. The thing is,when I’m in a good mood, I never have an urge to write anything. I’m too busy enjoying myself. It’s only when I’m struggling with something that I feel the need to write it down.”

Ghost Stories for Christmas is out now

Just like Santa Claus, rappers appreciate sparkling baubles and like their transport blinged-out with shiny red lights. Snoop Dogg, Danny Boy and The Dogg Pound are among the rhymers to channel their inner Perry Como on this 1996 charity record from Suge Knight’s soon-to-be-notorious Death Row Records.

The equivalent of snuggling up with hot cocoa while outside snowflakes catch in the streetlights. “It’s weird,” lead singer Alan Sparhawk would later observe. “That’s the record of ours people keep coming back to.” As did Low, who embarked on a Christmas tour, including a stop-off at Christ Church, in 2016.

If smashed whiskey glasses and shouting over the turkey are not your cup of eggnog, then you will find seasonal respite in this vast collection of agreeably sincere Christmas songs by the star-crossed folkie.

The sometime Kinsale resident was on to a winner in combining her piano melancholy with the slightly spooky charm of a Victorian Christmas. Behold the Dickensian goth-pop Christmas extravaganza you hadn’t realised you needed in your life.

Zooey Deschanel’s collaboration with Portland songwriter M Ward has seemingly sputtered out – but they did at least leave us with this 2011 Christmas collection. And yes, they did record the problematic Baby It’s Cold Outside – which the singer/actress had famously (and now perhaps notoriously) already performed with Will Ferrell in Elf.