Our favourite new artist of the week: Julien Baker

And the best tracks tracks of the moment come from Alex Cameron, Angel Olsen and Sylk 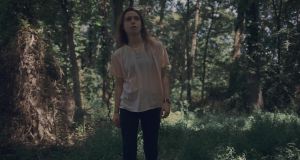 Who: Julien Baker
What: 21 year-old songwriter signed to Matador Records
Where: Memphis
Why: Eschewing the established country style of her Tennessee upbringing, Julien Baker is more beanie hat than cowboy stetson. The young songwriter’s debut album was originally released in 2015 but was re-issued earlier this year by US indie Matador Records. It’s easy to hear why it deserved a second go on the merry-go- round. Baker’s brittle acoustic songs are largely unadorned, with just finger-plucked guitar and subdued ambience. But much like Irish songwriter Soak there’s a youthful vulnerability that draws you in.

Blacktop is a song inspired by a belief in divine intervention after a car accident in which a fallen lamppost missed her head by inches: “So I wrote you love letters/And sung them in my house /And all around the South / The broken strings and amplifiers scream with holy noise/ In hopes to draw you out.”

Baker’s second album Turn Out The Lights arrives next Friday on Matador and a tortured darkness lurks beneath the album’s first single Appointments, which adds evocative textures beneath piano chords, while Baker’s searching voice sings of missed therapy meetings factoring into a deteriorating relationship.

When: She plays Whelan’s, Dublin on November 9th

You have to hear this...

If the the music world wasn’t so fractured by streaming platforms, Youtube and echo chambers, this duet is the kind of song that would make a surprise entrance to the mainstream.

The track sounds like a curtain-closer of a John Hughes films, with indie darling Olsen and Australian Cameron revelling in derisive lovers finding comfort in others (“Don’t bother flying when you jump off the cliff”) while cascading synths and horns add a triumphant tone to their taunts.

Sylk - Am I Alone

Darkness lurks on the fringes of the music of new Dublin duo Sylk who consist of producer Bebhinn Mc Donnell and vocalist Taylor Doyle. With their debut EP, the two women are working a sound that’s murky and hypnotic; electronic and pop as heard on their debut single Am I Alone. Broodingly effective and live, there’s a light show to boot.

A Beautiful Day in the Neighborhood: A tremendous film a great young director
2

How do I get my teenager off her phone and back reading?
Real news has value SUBSCRIBE