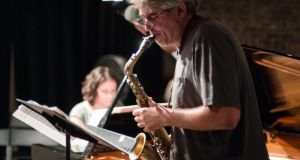 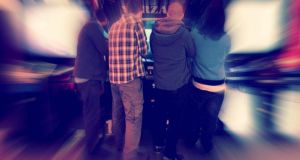 Cutting-edge US saxophonist Tim Berne is preparing for a trip to Ireland on a six-date tour with Dublin electro-jazz quartet Oko. But maybe “preparing” is too strong a word. Berne has no idea what he is going to play, or what the music is going to sound like. And that, he says on the phone from New York, is just the way he likes it.

“I guess we’ll rehearse,” he says hopefully, “but I think they’re probably intentionally keeping me in the dark. From what I’ve heard, Oko sound pretty groovy, but it isn’t particularly weird, or maybe weird in a good way.”

“Weird” and “groovy” are words that work for Oko’s futuristic sound. The members of the group – guitarist Shane Latimer, keyboardist Daragh O’Kelly, turntablist DJackulate and drummer Shane O’Donovan – might come from a jazz background, but their influences seem to come from everywhere: from techno and electronic dance music to krautrock and vintage TV show themes. Does Berne share any of those influences?

“I have probably heard maybe one out of a thousand of their references,” he says, laughing, “but I guess that’s what they want. You know, I’m usually playing in bands with people who have carefully chosen me for a reason. And I’m sure that is the case with these guys. I just don’t know what that reason is.”

If that all sounds like they will be making it up as they go along, that is what both parties are aiming for. Berne has steered his own course through the past 40 years, collaborating with lions of the New York downtown scene such as composer John Zorn and guitarist David Torn, and leading his own groups, including the hugely influential Big Satan trio and his new quartet, Snakeoil, which has just released its third album, the excellent You’ve Been Watching Me, on ECM.

Through it all, Berne has been a fiercely individual voice on the alto saxophone. If his sound is any more mainstream today, it is not that he has mellowed but because many younger players have been infected by his blend of complexity and freedom. But the 61-year-old’s background is not the usual child prodigy story; he came pretty late to the idea of being a musician.

“I guess I was like 19 or 20. I was in college and I think I just had too much time on my hands. Someone was selling a saxophone really cheap, like 200 bucks, so I bought an alto and messed around with it. And then I decided that in order to really do this, I had to take some lessons, so I came to New York and started taking lessons, and then really got into it.”

Does he think the late start made him a different kind of player? “I don’t know, I’d have to start early to find out,” he shoots back. “No, I wish I had been playing when I was younger. I probably would have had a lot of fun. As it is, I went through that process, thinking, ‘Oh man, I’m screwed, I’m too old.’ It’s certainly weird being a beginner at 20 when everyone else can play.

“But you know, you have to get over it. I mean, it’s not a very smart thing to do to want to be a player in the first place, so you have to really want to do it. And you get pretty motivated if you start late.”

“It just totally turned me around to this idea that actually you don’t need any tunes,” says Latimer. “You just go in and you listen. If it needs to change, you change it, or stop or whatever. And it’s not just noodly, looking-around-for- the-soap-in-the-bath kind of playing. It’s really, really focused.”

Oko’s sound has come into focus since they started out as a jam band five years ago, playing in a bar in central Dublin on a Sunday night for a nonjazz audience. For Latimer it was about searching for a way they could express themselves as jazz musicians without losing a civilian audience.

“A jazz audience wasn’t really our concern at all. It was the people in the bar, and I guess a lot of the folk who were frequenting the place had been out the night before and just wanted to chill out and watch a band on a Sunday evening.”

But the band’s sound has grown more complex since then, embracing the tight grooves of electronic dance music on the one hand and the looseness of the avant-garde on the other, with echoes of 1970s fusion acts such as Weather Report and Return to Forever. Anyone who checks out their excellent third album, I Love You Computer Mountain, released on Dublin indie label Diatribe in 2014, would struggle to name that genre. But they would certainly feel their body start to move.

“I think we’re a pretty good rhythm section,” says Latimer, “but this is an opportunity to place a really highly individual melodicist in the mix. Tim is a bit of an immovable object. He’s going to do his thing and it’s going to be about us supporting that and finding a way in there.”

For Tim Berne, the tour is less about being avant-garde and more about expression.

“I guess you could consider me avant-garde,” he says warily, “but there are a lot of different kinds of avant-garde. What I do, you have to be disciplined. You have to read a lot of crazy music. You don’t just start blowing your brains out. I look at it like I’m choosing to be an improviser versus someone who just plays written music. This just feels more like me.”