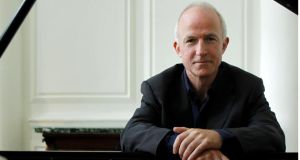 South Korea’s Sae Yoon Chon took the top prize at the Dublin International Piano Competition last May. He’s back in Ireland to claim part of his prize, a recital during Wexford Festival Opera. And he’s chosen to give his Wexford listeners a reprise of five of the eight solo pieces that helped him on his way to success in Dublin: Beethoven’s Sonata in F, Op 10 No 2;Brahms’s Sonata in F minor, Op 5; the Choral et variations movement from Dutilleux’s Piano Sonata; Debussy’s Des pas sur la neige and Liszt’s Rhapsodie espagnole.

The National Concert Hall’s new Female Composer Series gets under way with a programme from the Fidelio Trio – Darragh Morgan (violin), Deirdre Cooper (cello) and Mary Dullea (piano). The works are by Clara Schumann (her Piano Trio in G minor of 1846), Joan Trimble (her Cobbett Prize-winning Phantasy Trio of 1940), Lili Boulanger (the Nocturne for violin and piano of 1911) and Rebecca Clarke (her Piano Trio of 1921). The series runs to six concerts, with the next one, of cello and piano works, scheduled for Thursday November 15th.

Pianist Hugh Tinney celebrates his 60th birthday this year. He’s marking the occasion with a nationwide tour that starts in Cork and visits Belfast, Drogheda, Russborough House, Roscommon, Clifden, Ballina, Armagh, Bantry, Enniskillen and Castleconnell, before ending in Listowel on the actual day of his birthday, Wednesday November 28th. He frames his programme with works by Beethoven (the Sonata in F sharp, Op 78) and Schubert (the great Sonata in B flat, D960), and in between offers Thomas Adès’s Darknesse Visible and two movements from Ian Wilson’s Stations as well as Chopin’s Berceuse and Barcarolle. The following Friday, November 30th, he plays Beethoven’s Emperor Concerto with the RTÉ NSO under Jonas Alber.

Lewis Capaldi: ‘I’m not Justin Bieber or Ed Sheeran – I’m not getting chased down the street’
7