Hozier nominated for a Grammy for ‘Take Me To Church’

Hozier joins Taylor Swift, Sam Smith, and Sia in the Song of the Year category 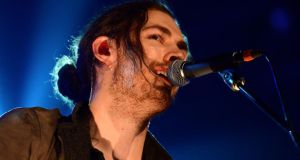 Andrew Byrne Hozier has been nominated for a Grammy in the Song of the Year category for ‘Take Me To Church’. Above pictured performing at the Olympia Theatre in Dublin on December 4th. Photograph: Dave Meehan

Irish singer Hozier is among the early Grammy nominees in the top categories announced by the Recording Academy on Friday. He is nominated in the Song of the Year category for his hit song ‘Take Me To Church’.

The Wicklow native first came to the prominence a year ago with ‘Take Me To Church’, his smash-hit single whose video went viral. He has since made appearances on The David Letterman Show and most recently at the Victoria’s Secret fashion show.

John Hume restored to his rightful place in Irish history
7