How Music Works: The Ruby Sessions - finding acoustic gems on a school night

Niall Byrne talks to Irish people who make a living in the music industry. This week, Conor Donovan looks back at 16 years of Ruby Sessions 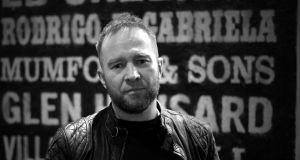 Conor Donovan: “The song really gets found out when it’s stripped back to a semi-acoustic version”

Every Tuesday night, shortly after 9pm, a hush descends over a room upstairs in Doyle’s pub opposite Trinity College in Dublin. Against a ruby curtain backdrop, a performer begins to play their first song and a small audience listen quietly.

For 16 years, Conor Donovan has been running and hosting the Ruby Sessions, the definitive acoustic music night in Dublin to catch up and coming singer-songwriters and special guest stars.

What begun on April 13th, 1999, has continued to thrive and to provide valuable experience to the Irish music scene, while hosting the established names such as Mumford & Sons, Glen Hansard, Damien Rice, Ed Sheeran, The Corrs and Hozier.

Donovan is a classically-trained musician who started drumming at age five, before becoming the principal percussionist with National Youth Orchestra of Ireland, a position he held for nearly seven years, as the band toured all over the world.

By the time he was 21, the Dundrum native, along with his Stillorgan friend Niall Muckian, had the idea to put on a night that would bridge the gap between open-mic nights and headline gigs. The pair hatched a simple idea for a shocase night - which would be booked by Donovan to ensure quality control. It would be a place to nurture talent and to shine a light on it.

Sixteen years later, the Ruby Sessions are more popular than ever, having spread its reputation around the world, thanks to special guests like Sheeran.

An attentive audience
“The ethos is still the same more or less,” Donovan says. “It’s an acoustic music club, it’s a 100-per-cent listening, silent audience – four acts playing four songs or 20 minutes each. All the money goes to charity.”

Muckian and Donovan’s decision early on to give the money made on the night to the Simon Community also worked in their favour beyond an altruistic gesture.

“By giving the money away, it freed us up to get the big acts that we’ve had,” says Donovan. “No-one’s pockets are being lined. We don’t pay appearance fees so that choice to give the money to charity was a great one.”

As for the venue? Doyle’s gave them the best deal.

“We went to four or five pubs, and they all tried to charge us money,” Donovan says. “Declan Doyle said, ‘of course, give it a go and see how it goes’. He’s is a good guy. He’s had one of the biggest-selling artist in the world playing his venue upstairs on a Tuesday and The Corrs doing their first gig on Irish soil in 11 years in his pub.”

Don’t call it an open mic night
The Ruby Sessions is now so well-known that Donovan gets hundreds of emails from people looking to play from around the world - but don’t get it twisted, an open-mic night it ain’t.

“On average, I have the line-up booked about three months in advance,” says Donovan, who spends three days a week working on the Ruby Sessions.

When he’s not working at that, it’s his first love which holds his attention. He has drummed with Jack L for the past 11 years and gives workshops and masterclasses.

With musicians coming in to Doyle’s every week, The Ruby Sessions is a good place for Donovan to meet new musicians to play with, which is how he ended up playing tuned percussion on Damien Rice’s wildly popular O album in 2002.

Running a night, week in/week out, for at least 48 weeks a year also means that Donovan is well-placed to comment on how music trends shift.

“Mimicry is always there. You’ll have a guy coming in and you can tell he’s been listening to Ed Sheeran for the last year, but at the same time, you do see a lot of originality. The quality of talent has come on leaps and bounds. It comes in cycles: loop stations are very popular now, whereas six or seven years ago, bands were more prominent.”

A song gets found out
The pared-back nature of a Ruby Sessions set presents a song in its bare essence and a clear vision of talent can be gleaned from a performance as a result.

“A lot of the time, the song really gets found out when it’s stripped back to a semi-acoustic version, whether that’s in a good way or a bad way for the artist.”

Donovan says recent highlights of performances have included Saint Sister, Pine The Pilcrow and Basciville, while the best night the Rubys ever had was with a guy who most people wouldn’t recognise by name – Billy Steinberg.

“He’s probably the most successful singer-songwriter on the planet. He can’t really play guitar, he can’t really sing but this guy wrote Like A Virgin for Madonna, True Colors and I Drove All Night for Cyndi Lauper, Eternal Flame for The Bangles and he played them all for us.”

Donovan says the Rubys audience are music lovers and are game for anything, as they showed a few weeks ago. “We said ‘special guests’ and there was a queue of 1,000 people around the block. When word got out that it was The Corrs playing, there was no disappointment, people were like ‘wow, that’d be amazing - what an opportunity.’ Of course, not everyone got in.”

Muckian meanwhile, is chiefly concerned with running the “umbrella” company, the label and management company Rubyworks, who have released records from Hozier, Rodrigo Y Gabriela, Otherkin and Wyvern Lingo among others.

The talent-spotter nature of Muckian’s work feeds into the Ruby Sessions occasionally - for example, when Hozier was given a slot when the A&R scram was happening for his signature, or when Muckian first encountered Rodrigo Y Gabriela.

“Niall saw them busking on Grafton St and rang me to ask if we’d any slots going in the next few weeks,” Donovan says. “I put them in and they ended up becoming the first signing to Rubyworks, and Niall’s first foray into management.”

Next up for The Ruby Sessions are two sold-out once-off nights in Smock Alley as part of NYF Dublin at the end of the month. The line-up won’t be announced in advance - but “special guests” promised.

Next year, the plan is for the Ruby Sessions to have its own stage at Electric Picnic. With its increased popularity and worldwide renown, does Donovan ever feel, the Ruby Sessions should get bigger to accommodate larger crowds permanently?

“We could move it to the Olympia once a month, no problem, but it wouldn’t be the same,” he says. “The Rubys magic happens upstairs in that room in Doyle’s.”