Hiatus Kaiyote: a future-soul sound endorsed by the stars 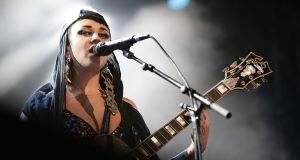 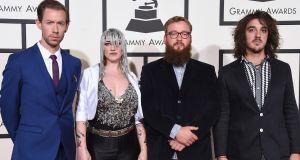 “We have 100 per cent creativity with our music and the financial support of a major label – the best of both worlds”: Simon Mavin, far left

Simon Mavin remembers how he felt when he heard Questlove had given his band a rhapsodic public seal of approval. “Once in a blue moon, something moves me so much I’m willing to alienate friends when an undeniable project comes along,” the Roots drummer and music mogul enthused. “This is that project.” It was the same feeling Mavin got when Prince tweeted a link to their song Nakamarra with the instruction “Don’t worry . . . just listen” and when Erykah Badu declared, upon hearing their music, “Okay, I’m done. I’m in love.”

“In the beginning, there was a lot of that stuff happening all the time,” the Hiatus Kaiyote keyboardist recalls, laughing. “The first one I remember was getting played on KCRW in LA. I remember streaming it from their website and saying, ‘Oh my God. KCRW is playing our music.’ Then it was like, ‘Yeah, Questlove has just tweeted about you’. It’s ridiculous that someone can put out a message and four million people will see it.”

Before they had the public approval of their peers, Hiatus Kaiyote were well on their way to success. The Australian quartet, formed five years ago in Melbourne, were brought together when bassist Paul Bender stumbled upon frontwoman Naomi “Nai Palm” Saalfield playing a solo gig and approached her about forming a band. Former jazz student Mavin – who had been playing with Bender on the thriving Melbourne music scene – enlisted his percussionist housemate Perrin Moss, and the band were quickly on their way to putting their stamp on the future-soul genre, a slinky concoction of styles that takes in jazz, r’n’b, hip-hop and soul and blends them all loosely together.

“Melbourne’s pretty incredible like that,” Mavin says. “We’ve got a lot of different types of music here from all over the world; it’s one of the healthiest scenes in the world and it’s really quite remarkable how much diversity there is in the music. So that’s kind of what Hiatus has stemmed from.”

Using a converted shop in the Melbourne suburb of Northcote as a rehearsal room, the band spent months fine-tuning their sound before releasing their debut album, Tawk Tomahawk, in 2012. Last year its follow-up, Choose Your Weapon, exhibited a longer, more ambitious continuation of the possibilities hinted at with their debut.

They initially released Tawk Tomahawk independently, but the music reached the ears of Salaam Remi, a name that will be familiar to those who saw the Amy Winehouse documentary Amy. Remi worked on Winehouse’s first and second albums and was producing her third before she died; he has also worked with the likes of Nas, Miguel and Alicia Keys. In an A&R capacity, he made Hiatus Kaiyote the first signing to his new Sony Masterworks imprint, Flying Buddha, which reissued the album.

“It didn’t feel like a major label,” says Mavin. “Sony Masterworks is a label that puts out classical and jazz – they don’t really put out too much pop stuff – so it was a really good fit. We have the indie side of things in that we have 100 per cent creativity with our music and the financial support of a major label, so it was the best of both worlds. And Salaam’s also a really beautiful guy and he’s all about the music, so it was a really lucky connection that we made there.”

Although they have yet to make a significant impact in Europe, Hiatus Kaiyote have already clocked up two Grammy nominations for best r’n’b performance – first, for Nakamarra in 2013; and earlier this year for Breathing Underwater, which lost out to The Weeknd’s Earned It (50 Shades of Grey). The whole process, says Mavin, is not quite as glamorous as you might imagine.

“LA is crazy; it’s just like a different world,” he says. “And then you go to the Grammys and it’s, like, the epitome of that different world. It’s quite an experience. I don’t know if it’s for me. I hate talking about this, because I feel like I should be really appreciative of the Grammys – and I am, of course I am – but at the same time, I’m just a musician and I’ve always just been about the music. When you go to those things, it kind of pulls away from the music a little bit more than what I want it to. But at the same time, I really do understand and appreciate how incredible the whole thing is.”

The band are looking forward to playing the intimate Sugar Club in Dublin for the third time, despite their growing international reputation.

“The smaller the better, I think,” he says. “As soon as you end up playing bigger and bigger rooms, you become further and further away from the audience. I love being super-close to people and feeling the energy of an intimate gig, it’s awesome. There’s such a good vibe in Dublin; last time, we hung with people after the gig and sang songs out the back. It’s like Melbourne, in that respect. It’s always about the music.”

Ghosts: Dolly Alderton’s debut novel haunts, but not in a good way
6