Harry Styles review: The pop star with the rock licks is in a league of his own

Review: ‘I’ve one job to do tonight and that’s to entertain you.’ He doesn’t fail 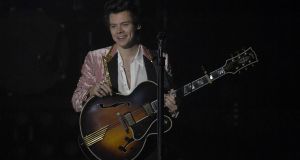 “I’ve one job to do tonight and that’s to entertain you. I’ll promise I’ll do my very, very best”, says Harry Styles on the last night of the European leg of his tour.

Standing in front of a full house in Dublin’s 3Arena, there’s something quite different about Styles. All he has to do is wave – even when the lights are down – and the crowd erupts into high-pitched screams that could burst lungs.

He proves his superstar status easily but he maintains a sincere level of modesty throughout the entire show, making him more personable than a lot of his pop star peers.

He’s dressed in a bottle green, pin-striped one-piece that’s pinched at the waist and then fills out to a flare. We glimpse his chipped black nail polish as he plays electric guitar. Styles looks the part but he keeps it low-key, checking in on the crowd like a chatty barman instead of taking himself too seriously.

Kicking off with Only Angel and Woman, he leans heavily into the 1970s rock scene and with a wraparound screen displaying colourful and quirky Yellow Submarine-inspired illustrations, he shows off his musical learnings and inspirations since going solo.

When a pop star veers off course and takes the rock route, it’s easy to be judgmental but when Styles plays guitar, the concentration on his face is one of a man who refuses to fail. No one wants to be the former boy band member who takes on something bigger than he can handle.

“Be whoever you want to be in this room tonight,” he tells the crowd, practising the acceptances he preaches because he seems more himself here than he ever did in One Direction.

Even though he’s the one on stage, he finds ways to let the audience know that he’s on their level. As he walks through the crowd to a mini-platform in the middle of the arena, fans throw glitter over him and he blows kisses and makes eye contact.

A disco ball descends and he holds onto a tricolour and a LGBTQ rainbow flag.

During a performance of Anna, where he mixes in a few lines of George Michael’s Faith, he stops midway to check on a fan who looked like she was either getting crushed or simply waving.

Attentive and sincere, he’s a natural charmer, cracking out the occasional Moore Street mantra of “three bananas for a euro”, letting us know that he actually knows Ireland.

A story about getting head-butted in Tallaght goes down well, and he remarks that “Kildare is beautiful this time of year” when one fan shouts out her country pride. He knows all this because he has a “mate from Ireland”, referring to our own Niall Horan who recently played the 3Arena, to a much younger crowd.

The rock schtick feels a bit overdone when he plays Carolina and Kiwi but when he takes it slow with more contemporary and emotive songs like Meet Me in the Hallway and Just a Little Bit of Your Heart, a song he wrote for Ariana Grande, the strain of his voice pushes him away from the Ed Sheeran style of guitar pop, and he becomes a singer who’s very much in a league of his own.

His debut single Sign of the Times secured his spot as someone to keep an eye on but the rest of his album doesn’t fill the room quite the same way.

He hints that album number two is in the works, and while this is very clearly his 1970s phase, a cover of Fleetwood Mac’s The Chain added into the encore to boost this preference, the way he shimmies around the stage indicates that there’s a little bit of disco in him.

If he studies the way of Chic and INXS, his next phase could leave us all weak in the knees.

Styles may be in the early stages of his solo career but with performances like this, it’s clear that he’s in it for the long run.