Guy Garvey: The Elbow singer on his solo takeoff

A new band, new relationship, and a struggle with strange lyrics – Guy Garvey’s mid-life crisis seem like an awful lot of fun 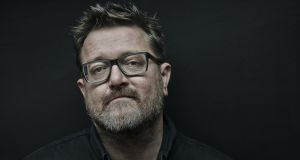 Guy Garvey: “Most people don’t realise till they’re nearing 40 that you’re allowed to feel more than one thing at one time”.

Every day’s an education with Guy Garvey. You ring the Elbow frontman up for a chat, and before you know it you’re deep into a conversation about transatlantic telephone cables, Alec Guinness’s spectacles in Smiley’s People, and the unbridled joy of eight-hour train journeys. “I love ’em,” he says of the latter in that deep, distinctive Mancunian brogue. “I get loads of writing done and I feel . . . I don’t know. Even if it’s a noisy, not very well looked-after, dingy little Arriva TransPennine one with no plug sockets, I still feel like I’m in the lap of luxury whizzing through the countryside.”

It’s easy to get sidetracked with Garvey, but it’s appropriate in this case – particularly since the purpose of our conversation is to talk about his own career diversion with the release of his debut solo album, Courting the Squall. The main question is: why now?

“A journalist I spoke to this morning suggested that it might have been a midlife crisis, and actually, that kind of rang a bell,” he says, chuckling. “I think approaching 40, I was single, having split up with my long-term partner a couple of years ago. I suddenly thought, ‘I’m happiest when I’m writing; I should be doing more of that.’ So really, it’s about upping the output, more than anything. Elbow’s always gonna be my focus, and it has, to this point, been my life’s work. But this was fast and spontaneous and fun; it’s the most fun record I’ve ever been involved with, in any capacity.”

It was tempting to call up his best mates to play on the album, but he was talked out of doing so by Elbow bassist Pete Turner. “He said, ‘I think you should do your own thing – then you’ll feel like it’s your own thing.’ ”

The musicians he enlisted weren’t strangers, however. They include bassist Pete Jobson of I Am Kloot (a band that Garvey has co-produced several albums for), “because we’ve poured each other into taxis for so many years”, Nathan Sudders of Manchester band The Whip, Ben Christophers and drummer Alex Reeves, as well as the string section that Elbow play with.

“We were supposed to be doing it in three sessions at Peter Gabriel’s studio [Real World], but we had to do it in two, because we drank the budget for the third,” he laughs. “We had to come to Salford to finish it. But I’m working with pals, and it’s just been a riot.”

While sessions for Elbow’s best-known album, The Seldom Seen Kid, were long and fraught, this one took a comparatively brief nine weeks.

“To be honest with you, what’s on the album are the first 10 songs I wrote. It’s not crafted. When I remember the hours and hours that went into The Seldom Seen Kid, it feels more like an architect looking at a building than someone listening to a record. I picture the skylines of Manchester changing throughout writing that record; I picture the stress we were all feeling that we managed to keep off the record; and then the life-changing events in terms of my friend [Bryan Glancy, whom the band dedicated that album to] dying, and falling in love with [former partner] Emma for the first time. All that stuff is on that record, and it says 10 years of my life, to me. This album feels like it’s got energy.”

The fact that Elbow altered their creative process for their last album, 2014’s The Take Off and Landing of Everything, working and writing separately, before reassembling it together, also had an impact.

“The decision to work more separately from Elbow wasn’t born from anything being wrong, as much as it was preparing to be together for another 20 years,” he says. “It was to make sure that it doesn’t go wrong. I know bands that don’t travel together – not because they’ve fallen out, but in the interests of longevity, they arrive separately at every gig so that they’re not spending hours and hours in each others’ company. I think that’s really smart. And yeah, the confidence for sure was gained by working a little bit separately, but I also realised that I can write two records at once.

“The consideration was always that Elbow was the focus and nothing else could get in the way, and I had to remain singular. It still is the most important thing by far, but I’ve realised that I can do two things at once – in the same way that most people don’t realise till they’re nearing 40 that you’re allowed to feel more than one thing at one time. You can be happy and sad at the same time; in fact, it’s normal to have more than one feeling going on at the same time. So I can write earnestly and from the heart and really go digging for things in the way that I always have with Elbow – and at the same time, I can write frivolous sort of comic lyrics, as I do on [album track] Angela’s Eyes.”

Courting the Squall certainly covers all the bases on that count. There are songs like Belly of the Whale, written in the wake of his split with long-term partner, writer Emma-Jane Unsworth.

“It’s about the house I live in, just after my break-up. Suddenly, this place was way too big, and it felt awful, y’know? It was cavernous for a little while. But you fill the place with new memories, and I’ve fallen back in love with it. But at the time, there was this terrible sort of feeling of loneliness and shame – not because I’d done anything wrong, but because things hadn’t worked out the way I thought they would.”

As a counterpoint to the melancholia, there are songs about his newfound love with actress Rachael Stirling – in particular, Electricity, which was written and is co-performed with musician Jolie Holland of The Be Good Tanyas. This is where those Trans-Atlantic phone cables come in.

“And now I can talk to New York for free, on Skype,” he marvels. “I just think it’s wonderful: leaps, bounds, and advances. So Electricity was kind of semi-celebrating my passionate love affair with New York, but because it was about a transatlantic love affair, Jolie completely got it because she’s in love with a guy that lives in New York. I remember at one point saying, ‘We’ve described how phone calls work in this day and age; what have we not said? What do you say on the phone to your lover that we haven’t said yet?’ And I remember her looking at me with this coy smile and saying in her southern drawl, ‘Tell me what you’re wearing,’ and I was like ‘Whoooo! You can sing that line,’” he laughs, heartily.

Travel has been a feature of Garvey’s life over the last while, but visiting Stirling – who is filming new British comedy film The Finest Hour and a Half on location in Pembrokeshire – via a train journey also proved inspiring when it came to writing for the next Elbow album. “I got something down. It’s an image I’m wrestling with at the minute, summat to do with ‘the Jurassic coastline of your heart’,” he explains. “I don’t know what I mean by that, but I get a feeling when I think about those words in combination. I’m not quite sure what I’m on about at this moment, but you never know – that might be on the next record, somewhere.”

With all this talk of Elbow’s next record, does that mean that there’s no chance of him calling it a day with the band he’s fronted for 25 years – regardless of how well his solo career may go?

“I’m most proud of my work with Elbow and always will be,” he says firmly. “But I love this record for what it is, and I want to do more of them. There’s no reason you can’t do both. Why not?”

Courting the Squall is on Polydor. Guy Garvey plays the Olympia Theatre, Dublin, on December 7th

The best new young-adult fiction: The thrills and terrors of piloting
9