Guitarists and drummers in Dublin: This week’s must-see jazz gigs 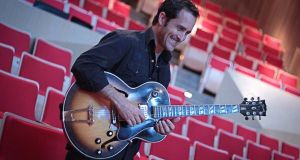 Mathias Winkler’s äTSCH quartet may have started life as a graduation project for the guitarist’s degree in jazz performance from Newpark, but the band – with pianist Graeme Bourke, drummer Hugh Denman and bassist Eoin O’Halloran – has stuck together, mining that rich seam first opened by Pat Metheny’s groups, but drawing inspiration too from younger guitarists like Gilad Hekselman and post-rockers like Sigur Rós. Part of the artist-run Dublin Jazz Co-op series in the intimate, listener-friendly Vintage Room, upstairs at the Workman’s Club.

Dublin being a guitar town, there will be plenty of dropped jaws and furrowed brows at this one-night-only appearance by two younger-generation masters of that instrument. Both come with considerable pedigree, top-flight recording credits and ringing endorsements from some of the giants of their instrument, including Pat Martino (Veras) and John Scofield (Kreisberg). The pair have just released an album, imaginatively entitled Kreisberg meets Veras, and arrive in Dublin in the middle of an extensive European tour to promote it, so expect this powerful duo to be well and truly warmed up and finishing each other’s sentences.

Since 2016, feted Spanish drummer Gonzalo del Val has been dividing his time between his new base in Dublin and Barcelona, where he still teaches at L’AULA de Música Moderna. To announce his arrival on the Irish scene, he has recorded an album, Standards in Dublin, with two jazz heavyweights who are no strangers to Irish audiences, New York saxophonist Dave Liebman and Dún Laoghaire bassist Ronan Guilfoyle. Alas, Liebman is not in town for the album launch, but his place in this hefty trio is taken by Michael Buckley, who has toured and recorded with the great saxophonist and is perhaps the only horn player on the Irish scene with the range and ferocity to step into those particular shoes.

Jazz and hip-hop have been getting along very well in the 21st century, and here’s more proof: rising Dublin outfit Shy Mascot are rapidly gaining a reputation with their mellow, deeply funky blend of Milesian fusion and thoughtful rap. A silky rhythm section of keyboardist Eanna Ryder, bassist Keith Tobin and drummer Andy O’Farrell lays down the killer grooves, while out front, gutsy vocalist Fiadh Rua Gregg provides the soul, and bashful-not-boastful MC Jamel Franklin, born in South Florida but now based in Ireland, delivers authentic rhymes full of passion but without the usual bombast, hence the name. Support from Dublin MC Damola.

The Movie Quiz: Brad Pitt has how many Oscars?
10