Gig of the Week: Lily Allen

Warts’n’all pop with acerbic lyrics and steady progression down the years? Yes please 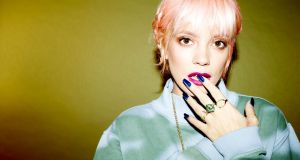 Going from MySpace to no place to hide in just over 10 years is something Lily Allen probably didn’t foresee when she was a wannabe pop star in 2005. It wasn’t that she didn’t have experience of the showbiz lifestyle, either – her father is Keith Allen, a comedian and actor who had close connections with the world of UK alternative entertainment in the 1980s and 1990s. Her film producer mother, Alison Owen, meanwhile, had many associations in the movie industry. A life outside such diverse and creative areas didn’t seem likely for young Lily, and so it proved when at the age of 11 she was overheard in a school playground singing the Oasis song, Wonderwall.

Although Allen’s teenage years were fractious (she dropped out of formal education at 15, having previously been expelled from a few schools for drinking and smoking; she dealt drugs in Ibiza in the aftermath of a family holiday), by the time she turned 20 she had signed to Regal Recordings, an imprint of EMI. It was at this point (late 2005) that Allen created a MySpace account, and uploaded demo songs that attracted tens of thousands of listeners. By mid-2006 she was appearing on magazine covers and had released her debut album, Alright, Still. The record displayed Allen’s conversational sense of humour and was laced with acerbic asides and barely concealed insults. Such an audacious stance for a female pop star to take was viewed positively (“the icing on the cake is that brutally barbed tongue,” noted the Observer) yet perhaps pushed Allen into a corner from which it was difficult to escape. Within four years – which included the release in 2009 of her follow-up album, It’s Not Me, It’s You (“A real person telling us the most intimate details of her real life, only with better hooks”, remarked the Daily Telegraph), Allen took leave of absence from recording, not returning with another album until 2014, with Sheezus.

Another record, another controversy. The video for the album’s first single, Hard out Here – intended as casual commentary on the objectification of women in contemporary pop music – was accused of being racist for its predominant use of mostly black and Asian dancers. Allen later apologised for cultural appropriation: “I definitely wanted to make a feminist statement,” she said in an interview with Annie Mac, “but I was guilty of assuming that there was a one-size-fits-all where feminism is concerned.”

Following another period of time off the cultural radar, Allen returned earlier this year with a new album, No Shame, a superb warts’n’all offering that helped her process personal matters such as tabloid exposure, parenting, marital difficulties and substance abuse. Soon after, her memoir, My Thoughts Exactly, was published. Like her doggedly honest songs, the memoir confirmed her status as a selfless, confessional writer confident enough to briskly admit flaws and virtues. A songwriter with prickly thorns as well as a natural disposition for cute pop melodies? We’ll be having some of that, thanks.