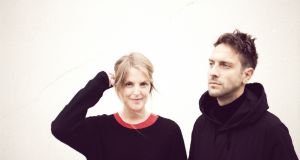 Anyone who thought that jazz still involved men in suits playing swing music was put right (again) this year as the improvised music envelope continued to expand in every available direction, both at home and internationally. The discovery of a lost recording by one of the undisputed giants of the music, the continued rise of Ireland’s regional jazz festivals, a string of high-quality new releases from both ends of the island, a discussion (finally) about gender balance, and a renaissance at the Cork Jazz Festival were just some of the highlights of a busy year in Irish jazz.

The year began with a Music Network tour by UK saxophonist Trish Clowes and her band, bringing a striking new voice to parts of the country that rarely hear jazz. London-based Irish vocalist and composer Lauren Kinsella was also due to tour her superb Snowpoet project in March when, poetically, the snow intervened. However, Kinsella and her band of London heavyweights were nothing if not persistent and the audiences that turned out for the rescheduled dates a week later got a taste of where vocal jazz is headed in the 21st century. Also home in March and touring the country was creative Brussels-based saxophonist Sam Comerford with his genre-defiant Thunderblender project, and in June, multi-instrumentalist Seán Carpio led his international Stella Maris group, deploying various out of the way sacred spaces as characters in a most imaginative improvisatory project.

Though the capital hasn’t hosted a jazz festival for over a decade, Ireland is improbably blessed with a number of high-quality regional festivals that combine artistic credibility with the tenacity and sheer bloody-mindedness needed to keep the show on the road, year after year. Bray Jazz Festival celebrated a remarkable 19th year with a strong contemporary programme that included New York heavyweights Dave Douglas and Joe Lovano, and rising Brooklyn saxophone star Ingrid Laubrock. Galway’s festival, under the stewardship of new director Ellen Cranitch, was a model of inclusivity and sustainability, with artists like German pianist Julia Hülsmann’s trio and UK pianist and vocalist Liane Carrol playing a largely free festival with no unnecessary merchandise, no plastic bottles and no hang-ups about what jazz is. Limerick Jazz Festival hosted star UK saxophonist Julian Siegel and Belfast trumpeter Linley Hamilton, Kilkenny Arts Festival introduced a new jazz strand (programmed by your correspondent) which featured guitarist Chris Guilfoyle and New York vocalist Theo Bleckmann, while the Sligo Jazz Project once again staged one of Europe’s biggest and friendliest jazz summer schools with a festival added in the evenings just because, well, everyone was there already.

The yawning gender gap in Irish jazz was the subject of much discussion in 2018, and the news that Ireland’s flagship jazz event, the Cork festival, was to have a new woman director was greeted with approval and optimism by Irish jazz musicians of all genders and none. Sinéad Dunphy duly delivered an excellent revamped festival at the end of October, headlined by one of the leading women of international jazz, US composer and orchestra leader Maria Schneider. And with plenty of space too for local musicians, Dunphy became every Irish jazz enthusiast’s new best friend.

Among a raft of new releases from Irish jazz artists, the standouts were: Making Other Arrangements, an ambitious big band project from Belfast trumpeter Linley Hamilton; Migrations, a solo meditation on place and displacement from Dublin-based Italian pianist Francesco Turrisi; Turning Skies, a subtle and self-assured new album from vocalist Cormac Kenevey; Swingin’ at the Haven, an album of crisp standards from Belfast drummer Darren Becket with UK pianist Oli Howe and top Dublin bassist Dave Redmond; and West, a suite of original compositions from guitarist Chris Guilfoyle and his powerful Umbra band. The National Concert Hall scored a coup in March when feted US pianist Brad Mehldau released After Bach, a new work jointly commissioned by NCH and Carnegie Hall, to justifiably enthusiastic reviews.

But undoubtedly the year’s big recording story was the discovery in New York of a lost album by John Coltrane. Recorded in 1963 and tucked away in a private house ever since, Both Directions at Once was greeted with disbelief by the international jazz community and The Irish Times was among a very select group of industry insiders invited to hear the lost album in the New Jersey studio where it was recorded. It did not disappoint – either the ecstatic jazz critics (ahem) or the record company, who achieved their own kind of ecstasy when the record made a brief appearance in the mainstream pop charts. In a year when the jazz meta-genre continued to expand in every direction, it showed that there is still room for a few men in suits.

The Movie Quiz: What is the completely made-up tagline for Jaws 19?
8