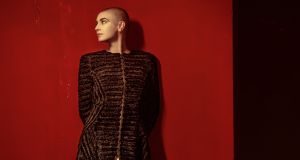 Sinead O’Connor is in Galway on Wednesday and Thursday

LOCAL NATIVES
The Academy, Dublin
Having released their fourth album, Violet Street, this March, LA indie band Local Natives are dedicating the month of October to touring across Europe. In an attempt to take it back to “square one” and reconnect with each other, the album was written and recorded in producer Shawn Everett’s (Alabama Shakes, Kacey Musgraves, The War on Drugs) home studio. Community, friendships, Los Angeles and the band itself are the key subject matters. Support on the night comes from London singer-songwriter Rachel Chinouriri. LB

JOIN ME IN THE PINES
Black Gate Theatre, Galway. Also Friday 18, Coughlan’s, Cork; Saturday 19, Lost Lane, Dublin
You would have to wonder how some people have the knack of delivering one quality melody-driven pop song after another without losing their touch. Full-time BellX1 member Dave Geraghty has been a constituent part of seven group albums and three solo projects (the latest of which is the critically acclaimed album, Monomania, released less than two months ago), and still the sheer class of the songwriting emerges intact. Will any BellX1 songs be played? We’re not sure, but let’s be honest – Geraghty’s solo work is so good there won’t be any need to. TCL

SYML
Button Factory, Dublin
American songwriter Brian Fennell channels his Welsh heritage with his chosen music project title (it is Welsh for “simple”), but this is where any similarity or cross-referencing ends, as the man’s songs are smart, layered responses to identity and love. Syml’s self-titled debut album, released several months ago, was described by this newspaper as “experimental electronic songs” and “sensitive pop-rock . . . destined for the charts”, and, while the chart-bothering might still be a struggle, you can rest assured that in a love context Fennell reaches the heights. TCL

SQUEEZE
Opera House, Cork. Also Tuesday 15, Vicar Street, Dublin
The description of Glenn Tilbrook and Chris Difford as “the Lennon & McCartney of new wave” isn’t a wild exaggeration, as the songwriters encapsulated a certain era via a sequence of some of the best pop songs released in the late 1970s and early ‘80s. Punk was never really Squeeze’s thing, either, despite the skinny-tie and straight jeans demeanour; rather, it was a blend of socio-realistic storylines and great melodies that hooked in the listener. Over 40 years later, the two constant members of the band – Tilbrook and Difford – continue to play the hits (terrific) and the misses (not too bad, either). TCL

TWO DOOR CINEMA CLUB
Olympia Theatre, Dublin. Also Tuesday 15, same venue; Wednesday 16, Telegraph Building, Belfast
There are hardly any Irish bands with as sharp a take on visual representation as Two Door Cinema Club. The only winners of the Choice Music Prize (2010, for their debut album, Tourist History) to give away their prize money, the Bangor group have particularly excelled this year with the overall creative hoopla surrounding their fourth album, False Alarm. The music is as focused as ever (all shapes of pop, disco, rock and soul, as stitched together by Dublin producer Jacknife Lee), while the art design for the album, videos and live shows are textbook clever. Special guests include Pillow Queens and The Wha. TCL

Since returning to the skirmish that is the music industry some months ago, Sinead O’Connor has taken tentative steps back into the spotlight. While her recent performances on The Late Late Show and at Féile ’19 focused more on the she’s-back-and-isn’t-she-great aspects, these bona fide gigs constitute the first time in several years where she will trawl through her estimable back catalogue as well as previewing new material. O’Connor undertakes more dates in the last week of this month: Spiegeltent, Wexford (Thursday October 24th), Opera House, Cork (Saturday October 26th), Vicar Street, Dublin (Sunday October 27th/28th). All shows are sold out, all shows are highly anticipated. TCL

PURPLE JEWS: A TRIBUTE NIGHT FOR DAVID BERMAN
The Soundhouse, Dublin
US songwriter/poet David Berman passed away earlier this year, and, in celebration of the man’s wealth of material used in the groups Silver Jews and Purple Mountains, a Dublin-based collective quickly gathered to honour him. The result is Purple Jews, which includes (among others) musicians Adrian Crowley, Eileen Gogan, Steve Ryan and Maija Sofia. RTÉ broadcaster John Kelly will also read from Berman’s 1999 poetry collection, Actual Air. Expect other special guests to be announced much closer to the gig. TCL

HOT CHIP
The Olympia, Dublin
To the surprise of no one, tickets for this show are extremely scarce on the ground. Though Hot Chip are mainstays of the festival circuit, it’s been a while since they’ve had their own headline show here, so Irish fans are champing at the bit to see them in action. Their seventh album A Bath Full of Ecstasy, which was released in June, is a moving and existential piece of work, so as they continue to wear their hearts on their sleeves, we can keep on wearing our dancing shoes. LB

HAPPYALONE
Upstairs in Whelan’s, Dublin
With their new single Lucifer being released into the wild on October 18th, Irish alt-pop act happyalone can officially use this gig as a chance to wet the single’s head, even if satanic figures and christenings don’t usually go hand in hand. The genre-fluid trio toy around with different sounds and energies to create something wildly different from most of their peers. Experimental, unsettling and hypnotising, their music takes on a wilder meaning in the live setting, thanks to their onstage messin’, as seen on their Instagram stories. LB

HOMEBEAT PRESENTS: DOWRY
Pepper Canister Church, Dublin
For her first headlining show in Dublin, Dowry aka Éna Brennan has decided to do something special. The  multi-instrumentalist and composer will be joined by the Dulciana Vocal Ensemble and a special guest on the night for a curated programme of songs that she has written for the choir over the years and to premiere the fifth instalment of her Rupture series. The performance will have a scheduled 15-minute interval, presumably for the audience to discreetly brush down the hair standing on the back of their necks. LB

DRY CLEANING
The Workman’s Club, Dublin
Deciding to form a band after a night out at a karaoke bar is as good a notion to make music as any other we have heard. London’s Dry Cleaning (which features former university lecturer Florence Shaw on honeyed and meaningful vocals), however, have managed to create something much more than a post-punk party vibe with their recently released six-track debut EP, Sweet Princess (which features The Magic of Meghan, a celebratory song about the Duchess of Sussex). Impeccable influences (B52s, The Feelies) and a different style of vocals (spoken word) – Dry Cleaning are at your service. TCL

HOMEBEAT PRESENTS: ALARMIST
Project Arts Centre, Dublin
Released in July, Alarmist’s second LP, Sequesterer, is finally getting its official launch over two limited-capacity nights in the Project Arts Centre with a full A/V show from Algorithm.  The Dublin instrumental act continue to draw on post-rock, electronic, jazz and chamber music with their latest music, making for a vibrant and structured yet beautifully chaotic listen. This is the first of a series of shows presented by Homebeat in collaboration with Project Arts Centre happening during the autumn and winter months. LB

DAITHÍ
Button Factory, Dublin
Unassuming and polite he may be, but Daithí Ó Drónaí has cause to whoop in 2019. Following a series of music releases this year, he has just released his second (excellent) album, L.O.S.S., for which this gig is the official launch. Vocalists on the album include Sinead White, Orla Gartland, Paul Noonan, Ailbhe Reddy and David Tapley (of Tandem Felix), so one could safely guess that some of these will be here, waiting in the wings, looking to Daithí for the nod to join him on stage. TCL

ELKIN
Whelan’s Upstairs, Dublin
Fronted by vocalists Ellen O’Mahony and Carla Ryan, Meath/Kildare-based Elkin have been around in various incarnations for several years. Initially performing as a duo, O’Mahony and Ryan have now settled on a line-up and songwriting base, and continue to explore interesting pop/folk/soul areas that bring to mind hints of Joni Mitchell and Haim. This sold-out show also features special guest Tolu Makay, a soul/R&B singer and songwriter whose latest song, Ocean, is really quite impressive. TCL

The Invisible Man review: Tenser than Christmas at the in-laws
3