Ever wondered where exactly those Spotify playlists come from?

When such track collections as Christmas Party, or Songs For Sleeping appear in your app, Waterford man James Foley is probably responsible 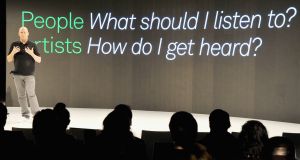 As a senior editor for Spotify, James Foley’s job involves listening and curating music to an audience of mostly one (at a time). His job did not exist 10 years ago.

Once internet access became commonplace and speed reliable at the turn of the century, it enabled an audience that flocked to illegal channels of poor-quality MP3 downloads via shady web-based services. People did so out of habit and convenience rather than any moral shortcoming. The sharks got there before the legal players and it looked like the music industry had missed the boat.

Enter the technology innovators. When Spotify, the Swedish-based music streaming service came along, it answered a question that was beginning to be asked - how to serve streaming music legally with ease, speed, good design and functionality.

“If you were dicking around with Limewire or Napster in the 1990s or even the early noughties and were presented with this flawless product; the best thing of all - that it was legal too,” says Foley. “That is a revolution and it happened really quickly.”

Foley remembers a specific few weeks about seven years ago when, while working at the London-based music industry newsletter Record Of The Day, he was given access to a beta press version of Spotify.

“I remember telling my boss during a panel at a conference that he needed to try it,” says Foley. “It’s so quick, it has everything. It has all of those thing we take for granted now – the speed of access, songs played much faster than any other service at the time.”

Expenses-only weekend job
Now Foley works for the company and one of six London-based staff who work in the editorial team. James studied journalism at Colaiste Dhulaigh in Dublin before moving to London “pre-boom”. He worked at Record Of The Day at evenings and weekends for expenses-only while he was working elsewhere. Eventually, a full-time role as music editor came up.

Foley worked in the role six years where he embedded himself in the music industry.

“The job was a mix of talent discovery, A&R, music industry networking, going to gigs, contacting labels and managers to see what’s coming up,” he says. “So when streaming services were coming up, I was uniquely placed to see the changes in the industry and to join that revolution.”

Foley worked at Deezer as head of editorial for nearly four years from 2011 to 2015. As part of the start-up team at Deezer’s UK and Ireland launch, Foley oversaw a small team making recommendations to UK and Ireland customers.

“It was at the time that streaming went from a curiosity to a force to be reckoned with. A year into the job the Official Charts company incorporated streaming into the singles chart so there was huge interest in the sector. It was a fascinating time.”

People playlists
Now, at Spotify, Foley is part of 70-plus team of people around the world who essentially make playlists for a living for the service’s 100 million-plus users. The team are the people behind playlists you see on the service’s main page like Christmas Party, Songs For Sleeping and Winter Acoustic.

A workout playlist, a high-energy EDM or hip-hop playlist get a lot more skips than the laid-back ones like chill, sleep or acoustic,” says Foley, who among others looks after playlists like Hot Hits UK, Massive Dance Hits, A Breath of Fresh Eire and Sweet Soul Sunday

“We can identify the song that has most likely caused them to leave the playlist.”

When the listeners of those playlists number in the million, this data is crucial.

“The way people consume music now is so different to 10 years ago,” says Foley. “If you go into a traditional record store, there isn’t a happy section, a sad section and a workout section but that’s how a lot of people who use streaming services think about music.”

In addition to maintaining these playlists, the editors also identify the need for new playlists, localise global ones and service them at the right time (album release day on Friday, Coffee Break playlist for Wednesday afternoon etc.).

Before that happens, they have to identify new music coming onto the service in the first place. With thousands of songs added every day, this isn’t an easy task. The editors are aware of what’s going on the music world and outside the platform too.

Beyond the data
“We’re also looking at independent curators playlists, looking at music blogs, contacts in the industry and there’s an official pitching process. We don’t just rely on the computer data to make our decisions. We keep our ear to the ground.”

In addition to the human-made playlists, Spotify’s algorithmic playlists Discover Weekly and Release Radar offer personalised versions for each user depending on what they’ve been listening to, an individual taste profile and what their peers have been listening to. The Viral Charts for each country updates its songs based on share-ability on the platform. A sudden increase for even an unknown artist can place their music into such a highly visible playlist.

Algotorial playlists
Occupying a curious space somewhere between machine and human playlists is the Fresh Finds suite of “algotorial” playlists. Focused on emerging artists, the project uses the listening habits of 50,000 identified tastemakers and filters out the results into only new artists and are now split into categories: Basement (dance and electronic), Hiptronix (pop and electronica), Six Strings (indie and rock), Fire Emoji (rap and R&B) and Cyclone (experimental and ambient) along with a master playlist of all of the above.

As for the Spotify editors themselves as tastemakers, with the data to identify emerging artists who are actually making a connection with listeners, the platform is in a unique position.

Democratic era
“We are always sharing what’s working in our territories, and performing well within the team.” says Foley. “If we identify something whether it’s signed or unsigned actually, we share it with the other members of our team and get global traction on it."

Foley cites Dermot Kennedy, an Irish singer-songwriter with three songs ranging from over million plays to 14 million plays (and over a million monthly listeners to those three songs) as an example.

“It’s the democratic nature of what we do. if you play a song on the radio, you’re never sure who’s switched on, we’re sure who is. We’re in a democratic era of the music industry where genuine fans and listeners are dictating the success of artist.”

Foley is optimistic about the future for Irish artists and its industry and the opportunities that services like Spotify present.

“Ireland punches above its weight in exporting talent and it always has done actually. There are challenges to the scale of that success, to the live scene in Ireland, to the media in Ireland, as there is everywhere."

“We’re in an exciting time for independent Irish artists. Streaming is a core component of the next wave. At Spotify, we can push those artists local success stories when they are identified and help them become global success stories.”