From late 2021, performers from all 50 states will compete in the American Song Contest 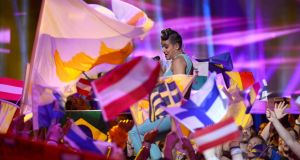 Eurovision Finland’s Sandhja (centre) performs with the song Sing It Away during 2016 semi-final. Photograph: Reuters

North Dakota could soon find itself awarded douze points by television viewers, after the Eurovision song contest signed a deal to create a US version of the singing competition.

The American Song Contest will launch in late 2021, featuring musicians from all 50 US states competing to be crowned champions in a series of televised competitions. Regional contests will be held in each state to choose a singer or musical group to progress into the nationally televised finals, with viewers whittling down the entries over three rounds of shows.

Anders Lenhoff, one of the producers for the new show, explained the concept to Americans: “Imagine if music was an Olympic sport and artists from all over the world came together to compete for the gold. That’s the Eurovision song contest.”

Translating its appeal for an audience who did not grow up watching the contest, he said Eurovision combined the “fanfare and excitement” of American football playoff games with the “artistry and beauty of world-class performances”.

However, it remains to be seen whether Americans embrace the culture of camp excess that has grown up around the original format. There is also the question of whether the same political regional rivalries that impact Eurovision voting - with the public often supporting an entry from a friendly neighbouring nation - will be apparent in the US version.

Other parts of Eurovision’s appeal may be harder to explain to Americans, such as how the show, at least in the UK, is known as much for the sarcastic jibes of commentator Graham Norton as for the actual songs.

In common with Eurovision competition rules, all entries to the American Song Contest will have to be original compositions rather than the cover versions typically sung by contestants on talent shows such as American Idol or The X Factor. Regional juries will select the entries that will go forward to the national competition, although there are still no details as to which US television network will air the programme.

This year’s Eurovision, due to be held in the Dutch city of Rotterdam, was postponed until next year due to the coronavirus pandemic. It was the first time the contest has been cancelled since it was created in 1956 in the spirit of pan-continental co-operation between European nations that followed the second world war.

Eurovision already has a small but enthusiastic US fanbase, including the actor Will Ferrell, who this year released his Netflix film Eurovision Song Contest: The Story of Fire Saga, parodying an Icelandic duo’s journey through the competition. – Guardian