The poet/ rapper/ playwright/ novelist is in full flow as she talks about her novel ‘The Bricks that Built the Houses’, her new album ‘Let Them Eat Chaos’ and her firm belief in love 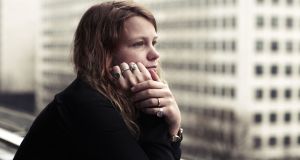 Kate Tempest: “It’s very unusual for a woman to be taken seriously just at first glance. We’re much more used to kind of looking at rather than listening to what a woman has to say.” Photograph: David Stewart.

“For my whole life I’ve been condescended to, I’ve been underestimated, I’ve been dismissed. And that’s because of how I look, my agenda, the fact that I don’t perform my agenda in a conventionally successful way. It’s been very hard to be taken seriously until you prove that you’re serious. This goes back to when I began rapping, and before that, as a kid, just as a person in life. And now it’s gone through to my poetry.

“In all the new forms and places that I’ve tried, it’s very unusual for a woman to be taken seriously just at first glance. We’re much more used to kind of looking at rather than listening to what a woman has to say. I believe that’s probably part of the urgency that I felt in needing to have three plays, three albums, two long poems, a novel, is to build this foundation from which my integrity cannot be challenged, my seriousness, my drive, my commitment. It can still be challenged, of course, but you cannot f**k with that. That’s mine. I did that. I am a writer. I have written. These things are finished. And by no means am I satisfied by any of that work. By no means am I ready to stop. By no means this is it. This is the foundation, the first level.”

It’s coming towards the end of an interview with Kate Tempest in a Dublin hotel and she is in full flow. Is her flow ever anything but? There’s a reason that in her chosen surname lurks a storm.

For a decade, Tempest – poet, spoken-word artist, playwright, novelist, musician and more – didn’t know how to get beyond Lewisham, south London. “How the f**k do I get out of the New Cross Inn?” she’d think to herself. How was she going to progress beyond a community recording studio where she could only book in 30-minute segments? She’d hear about this band or that band that had a van. “How?”

Hang on to your ego

Tempest admits her principal motivation at some points as a teenager was probably her “ferocious” ego: it pushed her to want to be on every stage, in everybody’s ear. Now, the driving principle is dedication to a craft she adores, which gives as much to her as it takes from her. She wrote, performed and published Brand New Ancients. In it she wrote:

“That face on the street you walk past without looking at,

or the woman by the postbox fighting with her brolly,

every single person has a purpose in them burning.

Look again, and allow yourself to see them.”

Tempest’s version of allowing oneself to see is intrinsically linked with allowing oneself to feel. She reawakens the heart as a tool of both transmission and reception, a highway of empathy and emotional exchange where traffic is free-flowing in both directions.

A good artwork, Tempest says, “Rather than teaching you something, it reminds you of something that you already knew. You know when it’s an extremely profound moment, or good fun, or whatever? It reminds you of something that’s already inside. I think that this is more important in the times that we’re in, to be connecting with what joins us, rather than clutching on to what divides us.”

Tempest believes that we have been fed a particular mythology that humanity is by nature competitive, aggressive and dominant, and she has turned her back on it. This belief in the concept of radical empathy leads her to conclude that if you can love, it will be better for you.

“I’ve spent my life immersing myself in other people’s stories, other people’s opinions, getting close to other people’s experiences. You are allowed into the internal experience of a person you’ve never met, never lived in the same country as them, in the same time as them, and you’re welcomed in in a way that opens the world, shows you into the universe, says ‘here you go, here is human experience’ . . . It’s not a decision that I made. It’s part of loving music and literature. To love people. That’s the primary push towards writing for me, because I’m in love with human beings.”

We built this city

Tempest pulls at the thread of society’s hem, the high street, the flat, the pub, the car passenger seat. In her 2016 novel The Bricks that Built the Houses, lives and emotions overlap with incredible dexterity and with no judgment of the scrappy drug dealers, hard men and masseuses that populate its world.

That world is London, a city of Tempest’s that is rapidly changing. When it comes to the fight or flight approach to gentrification, she references a track on her new album Let Them Eat Chaos, called Perfect Coffee: “So I’m moving on, I’ve got it all to play for. And I’ll be the invader in some other neighbourhood. I’ll be sipping perfect coffee thinking this is pretty good, while the locals grit their teeth and hum ‘Another fucking one has come’.”

Cities, she says, are strange, incredible places to live. “The pace that it gives us, the teachings, the ancientness of all of these layers of time and life being built on top of the other. London especially, it goes deep, you know? The souls of the city are everywhere, living and dead. Especially if you’re the kind of person that’s hungry for life, in a city: there it is. So if you have this relationship with a city, it’s close to you. So when you see your love, your family, your teacher, undergo such rapid change from people who have not have the same experience of the city that you have had, you feel heartbroken.”

The housing crisis in England’s capital, Tempest says, is “f**king absurd.” Tempest believes that this moment in the city’s history will be seen as a barbarous time. “What is happening is that you’re looking around at a place that has always been, for one, extremely diverse, becoming more homogenised. This is worrying for a resident of a city that has always had a particular kind of identity in terms of the people that live there, the music that gets made there, the way that it feels to be from there, the way it feels to party there, the way it feels to live and shop and eat. Going to the f**king shop to buy groceries or whatever suddenly has changed into this performance of what it once was . . . don’t think it’s a childish hankering of, nothing move, nobody move, I want it to be like this forever.”

In her own write

Working across forms must require discipline. At a talk in Smock Alley in Dublin earlier this year, Tempest spoke of the initial burst of writing what became The Bricks that Built the Houses in around two weeks. Her writing process generally has very intense beginnings: short one or two week-long outpourings of everything she’s thinking about a particular idea that has been germinating. The first draft of anything is miles too long. Draft zero. She takes time away from it, returning to it in perhaps a month. One of the most difficult parts of this process is editing.

“But editing is what makes a writer a writer. Actually writing is the fun part, the easy part. Anyone and everyone can and should be doing that, because it’s very helpful for your mental health to just unleash, let it out. But to sit down when you don’t feel like doing that, when you hate yourself and every word you’ve ever written, when you doubt everything: to deal with that is what makes you a writer.”

For now, there is the latest album, which will also be published as a long poem, slightly reimagined for the page. There’s another album being made with her producer Dan Carey and another producer from America who happens to be a big hero of hers (back in March she wrote on Facebook that she had just signed a record deal with Rick Rubin).

There’s a new book of poems she’s working on “very slowly”, and a translation of “an old play”. She was announced as the 2017 guest director of the Brighton Festival, and a European tour of the brilliant Let Them Eat Chaos will take her into mid-December.

There is little doubt that Tempest is a prodigy, but bestowing that title on her belies the graft that got her to where she is. Her talent across all articulations of it is almost frightening. As a live performer, her outpourings are visceral and technically expert. As a writer, beautiful turns of phrase and observations come pelting down on the pages like hail. I could easily publish the entire transcript of our conversation unedited, given how well-formed her thoughts and responses are. As she wraps up the conversation after listing off various upcoming projects, she leans back into the chair,

“There’s lots of ideas that I’m hoping to keep going with them.” She shrugs somewhat. “Just try to finish things.” Then there’s a smile. “Maybe a little bit of a holiday would be nice as well.”