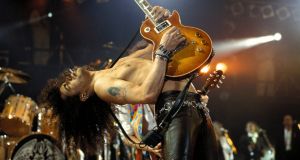 The maker of the Gibson guitar has filed for bankruptcy protection after wrestling for years with debt. Gibson guitars have been esteemed by generations of guitar legends.

Gibson guitars have been synonymous with generations of guitar legends . After Chuck Berry died, his beloved cherry-red Gibson guitar was bolted to the inside of his coffin lid. David Bowie favoured the 1989 Gibson L4 when he fronted Tin Machine. Other fans include former Guns N’ Roses guitarist Slash and Pete Townshend of The Who.

Gibson, whose legendary brands include Les Paul and SG, has been suffering under $500 million in debt linked to the acquisition of its consumer electronics business overseas, where sales have been in sharp decline.

A reorganisation plan filed on Tuesday will allow Gibson to continue operations with €135 million in financing from lenders.

Gibson was founded in 1894 and is based in Nashville, Tennessee. It makes its electric guitars in Nashville and Memphis, while its acoustic guitars are made in Bozeman, Montana. It sells more than 170,000 guitars annually in more than 80 countries. It also makes the Epiphone and Wurlitzer pianos.

The company has already sold off some non-core brands, acquisitions that contributed to its debt load.

It bought the Hong Kong-based consumer electronics arm from Philips in 2014, and started to wind down the unsuccessful business – including formal liquidation proceedings in Hong Kong, the UK and six European countries – on April 30th, according to court papers. Gibson said it plans to exit bankruptcy in September.

Don’t Be Evil: The Case Against Big Tech: Important book on corporate giants
6

The movie quiz: How many English-born actors played James Bond?
8