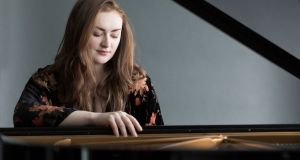 Pianist Ellen Jansson will be playing Fanny Mendelssohn’s Das Jahr, a cycle of 13 pieces, on Sunday March 7th as part of the Finding a Voice festival

Clonmel’s Finding a Voice festival, a festival devoted exclusively to music by women, is happening online this year, the only way that’s possible for it. The great Japanese marimba player Keiko Abe and percussionist/composer Evelyn Glennie are among the names represented in the opening programme performed by Alex Petcu, who will also play a new work by Elaine Agnew.

There will be songs by Pauline Viardot, marking the bicentenary of the birth of the great French singer and composer, for whom Berlioz made the now-dominant version of Gluck’s Orfeo ed Euridice with Orfeo cast as a mezzo-soprano. That’s in concert by soprano Kelley Lonergan, actor Aideen Wylde and pianist Gabriela Mayer.

Soprano Elizabeth Hilliard and pianist David Bremner have trawled the 19th and 20th centuries for works by Poldowski (real name Régine Wieniawski), Augusta Holmès (born in Paris to a father from Youghal, and who wrote a symphonic poem titled Irlande in 1882), Nadia Boulanger and Rhona Clarke.

And the Irish Baroque Orchestra’s leader, Claire Duff, and harpsichordist Malcolm Proud play works by Isabella Leonarda and Elisabeth Jacquet de la Guerre, the latter one of the rare historic female composers to have made it onto LP in the 1950s through the advocacy of Thurston Dart.

There are also programmes involving traditional music and improvisation. But the standout gesture of programming is a lunchtime concert on Sunday March 7th that’s devoted to just a single work, Das Jahr, a cycle of 13 pieces, one for each month of the year plus an epilogue, that runs to around 50 minutes. It’s by Fanny Mendelssohn, older sister of the famous Felix Mendelssohn.

It’s going to be played by the 24-year-old Cork pianist Ellen Jansson, whose younger brother Kevin is one of the Irish musical prodigies of our time. He’s 4½ years younger, and included some of Ligeti’s Études and a work by contemporary French composer Thierry Escaich on his debut CD recorded back in 2016 as the youngest participant and joint winner of the Thierry Scherz prize at the Sommets Musicaux de Gstaad Festival in Switzerland.

This might all sound like a sure setup for sibling rivalry, but when I ask I’m told, “No. Not at all. People always love to ask us that. But no. We’ve actually got a younger sister, who’s also a fantastic musician. It’s just a shared experience for all of us. We all understand exactly what the other people’s lives are. There are always allowances if someone has a concert the next day. It’s okay for them to stay up practising all night ruining the rest of our sleep. It’s nice to be on the same page so much with the family.”

And there was no pressure, either, to take up music as a career, even though both her parents taught music. “There’s a bit of pressure, knowing that we’re all in the same kind of career in a small country. But in terms of growing up and pressure to go into music – definitely not. I think I decided when I was about 12 that it was what I wanted to do. I remember my mom being, like, Are you sure? It’s not easy. There was definitely no pressure to follow in her footsteps or anything. And I’m very happy with the choice I made.”

It’s been lovely to watch it grow and I’m so delighted that it’s still there, that it’s got the funding to keep going. It’s a wonderful, wonderful festival

Jansson – who trained in Cork, Manchester (Chetham’s School of Music), Vienna (with Martin Hughes at the city’s University of Music and Performing Arts) and privately in Berlin – has had her heart stolen by the Austrian capital.

“Vienna will always clinch it for me. I absolutely adore the city. My mom actually studied there as well, in the same university, and my parents lived there for a while. It’s always been on the radar, I suppose. I did my Erasmus there and, actually, I hope to move back there next year. We’ll see. I’ve gone back there every year since I lived there, at least once. Can’t stay away. Just love it.”

She is no stranger to the Clonmel festival. “Róisín Maher, who started the festival and directs it with her sister Clíona, was actually my women in music lecturer in college. That’s how I got to know her, and I first heard of Fanny Mendelssohn’s Das Jahr in the lecture when she was telling us about it. I must have been in my final year of bachelor’s, studying with her, when the festival was set up. And I played a few short pieces in one of the concerts.

“One of the pieces I played was a discovery, this gorgeous little set by Canadian composer Alexina Louie. And then followed a whole load of coincidences and weird connections. A friend of ours in Canada knew her, it was going to be her 70th birthday. So we got her to come over and give a lecture and I organised a concert of chamber and solo works. That was the second year of the festival. I wasn’t there last year. And now I’m back again. So I’ve been quite connected with it from the beginning. It’s been lovely to watch it grow and I’m so delighted that it’s still there, that it’s got the funding to keep going. It’s a wonderful, wonderful festival.”

She says she is really enjoying discovering Fanny Mendelssohn’s Das Jahr. “I don’t think I’ve ever played anything of hers before. Which is awful. It felt a bit insurmountable at the beginning, it’s such a huge work. It’s deeply personal. I could hear her voice through it really clearly, from the beginning. The emotions in it are really raw, in a way, not cloaked – she didn’t revise and revise it the way a lot of pieces are written. It feels quite honest. It’s amazing, there’s just so much in it, so many ideas.

“On the other side of it, I feel some things are a little bit untidy, or difficultly written. If she’d revised it more there might have been a better way around it. But in terms of the actual music, I feel it’s just so honest, so pure, unedited in a way.”

Talking to Jansson, I was struck by the simple fact of her having had lectures on subject of women in music. So what kind of picture did she come away with? “The most interesting thing that came out of all of that for me was that we went through all the major anthologies and all the major editions and we just saw all the omissions that were happening. It was only in the late 20th century that people as famous now as Fanny Mendelssohn and Clara Schumann were included. They had been omitted from history up to that point.

“There still is an opinion out there that if it really is that good we’d know it. But after they died they were basically forgotten about until so much effort was made to bring them back into the public sphere. I think festivals like this are so important, and initiatives to help young female composers today as well. Even still, I don’t think there’s enough representation that young women could believe that... well, composing is never the most reliable career path to choose, but that it would readily seem like an option for them.”

At the moment, she teaches and also works as a coach/accompanist at the University of Limerick. But it’s a Covid-19 accident that she’s living in Cork in 2021. A year ago she came back from Berlin for a short break, and hasn’t been able to leave the country since. The first lockdown, she says, “was a disaster. I was just lost. It was the first time I didn’t have deadlines in my life, the first time I had nothing to do. I was just getting concerts cancelled day after day, further and further ahead.”

But she’s adjusted, and when I ask about her longer-term ambitions, she talks about “a nice balance of things” with “as much chamber music as possible. I love performing, but the collaborative aspect of it is the most important for me. I never saw myself with one of these crazy schedules, touring the world or anything. I never want to give up performing. I’d like as much as I can do while still balancing a bit of teaching. I have my own private teaching here as well, and I get a lot out of that as well. Best of all the worlds.

“It’s a strange time to be thinking so far ahead, actually.”

Finding a Voice is at findingavoice.ie from Friday March 5th to Monday March 8th