Stuart Staples: ‘The wrench of leaving a small town was very defining’ 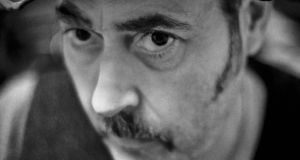 Stuart Staples: “I grew up in an industrial English city where people like The Clash introduced different ways of thinking.”

While artists are rightfully wary of reductive phrases like “lockdown album”, the extenuating circumstances of recent times helped Tindersticks get their 13th album, Distractions, over the line.

“I think the confinement provided an opportunity for something that was already happening,” singer Stuart Staples says. “I found myself in the studio at the end of March with all this time I didn’t expect to have. It gave us a purpose and a way of losing myself in weird times.”

Tindersticks members are variously scattered throughout Europe – in France, Germany, England and Belgium. Which makes convening to record an album a considerable logistical challenge, even at the best of pre-pandemic times. “Just to actually get people in the same room was very stressful,” Staples recalls. “Borders were closing and people had to leave to get back to their homes. When we finished it, I was exhausted because it wasn’t just about making music this time around.”

The opener is an 11-minute epic called Man Alone (Can’t Stop the Fading), the longest track the Nottingham band have recorded since their formation in 1991. It’s a startling departure from their sweeping romanticism and a swerve into hypnotic minimalism. Staples maintains that its sound is reminiscent of his early forays in music. Prior to Tindersticks, Stuart and guitarist Neil Fraser were in Asphalt Ribbons, but their first band was called Indignant Desert Bands.

“We only lasted for about 10 gigs, but it was where we started writing songs,” Staples recalls. “It was our world. Our musical references were Cabaret Voltaire and Joy Division, which became part of our DNA.”

Distractions features covers of The Lady with the Braid by Dory Previn, You’ll Have to Scream Louder by Television Personalities and A Man Needs a Maid by Neil Young.

“A Man Needs a Maid was on the agenda for a very long time,” Staples says. “We attempted recording it a few times and we used to play it in soundchecks. It’s one of those songs that hasn’t left me alone. The original arrangement is very orchestral, and I always felt that there was something simpler within it.”

Staples was introduced to the work of Dory Previn by an influential English teacher in school. “He was a very important person to me, although I didn’t realise this at the time,” Staples says. “About 10 or 12 years ago I started getting into her music and that song in particular, which really floors me. It became one of the most joyous and rewarding parts of making the record.”

You’ll Have to Scream Louder, a 1984 post-punk anthem, means a lot to Staples. “It came to get me. I’d been locked up for months going crazy in the studio. George Floyd had been murdered and that whole thing was kicking off. I couldn’t help but go back to the feeling of being young in the early 1980s and the battles that needed to be fought back then.

“Our generation felt that they can change something. I felt angry that we were back in this place again. It was a personal reaction and not about providing any kind of commentary.”

Television Personalities remind Staples of the rough and tumble of his youth.

“Nottingham was quite a violent place,” he recalls. “When I moved to London in my early 20s, it took me a long time to stop looking over my shoulder. If you’re walking through Covent Garden, it’s highly unlikely that someone’s going to come up and thump you, but in Nottingham every street you walked at night brought some risk. It was very tribal with gangs of skinheads, but this was just part of life back then.”

Music became an inclusive influence during divisive times. “I grew up in an industrial English city where people like The Clash introduced different ways of thinking. They got you listening to reggae. It opened up a conversation.”

Staples felt a sense of relief and rebirth when he left Nottingham. “It wasn’t about just leaving a physical place. I was leaving the idea of me in Nottingham. It almost feels like a pre-life now. The wrench of leaving a small town and going to London was very defining.”

An early signature single, City Sickness, which was accompanied by a video shot in Hyde Park and co-directed by Jarvis Cocker, explored the tension of moving to the city and realising it might not be the idyllic escape one imagined it to be after all.

His memories of London are visually explored in the new accompanying video for the aforementioned Man Alone (Can’t Stop the Fading).

“In the back of a London cab driving through the city at night is a very special space for me,” he says. “It has a particular kind of aloneness. This fascination grew over hundreds of nights leaving the studio exhausted at 1 am – Ladbroke Grove or St Johns Wood, through the city and over the river to southeast London in an almost dream state. Retracing that journey, this film became a way of touching the city and the feeling of being both a part of and apart from it.”

Tindersticks released their first album in 1993, during a fascinating time for music. Sandwiched between the tail end of grunge and the advent of early Britpop, landmark albums were released by Nirvana and PJ Harvey, plus stellar debuts from Björk, The Wu Tang Clan and Suede. However, the highly influential weekly music paper Melody Maker (which ceased publishing in 2000) chose the Nottingham ensemble’s self-titled debut as their album of the year.

“I saw an advert on TV recently for one of those best of the ’90s things,” Staples says. “All the usual suspects were present and correct. I’m glad that we never became involved in anything like that. We came so close but missed out on it. It was a very exciting time for us because people were listening for the first time. Even though the first five years of the band were very creative, the last 10 years have been the most rewarding and exciting.”

Tindersticks have a long-standing association with like-minded creatives and artists in other art forms, such as French film director Clare Denis and the late playwright Sarah Kane. When various writers chose their favourite albums of all time for the 2017 New Statesman annual (extrapolated into a book to be published this summer by Bloomsbury), Eimear McBride picked the second Tindersticks album, calling the eponymous record “the love of my musical life”.

She wrote: “It has shaped how I think about life, love, men sorrow and regret. It’s a masterpiece and an undervalued one at that.”

McBride has claimed that listening to Tindersticks helped her recall London in the 1990s while writing her second novel, The Lesser Bohemians, which is set in Camden. “I met Eimear in 2016 and she gave me a proof copy of The Lesser Bohemians,” Staples says. “It took me a while to get around to reading it, but when I did it blew me away. She really is an inspiration.”

The Girl Is a Half-Formed Thing author, who also penned the foreword for Sundog: The Lyrics of Scott Walker, credits Staples’s maverick talent with partially inspiring her to write in a masculine voice.

Distractions is released on February 19th