Ed Sheeran: What time is it on at, how do I get there, and are there any tickets? 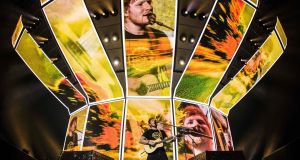 Ed Sheeran performing in Amsterdam on April 3rd, 2017. Expect to see a lot of bended knees at his concerts in Dublin. Photograph: Paul Bergen/AFP/Getty Images

When and where is it on? Ed Sheeran is playing the 3Arena tonight and tomorrow night. Doors are at 6.30p.m. and the show starts at 7pm, with support from Anne Marie and Ryan McMullan. Sheeran is expected to come on stage at 8.15pm so get your wees and your drinks order in by then.

Are there still tickets?
This is a very, very sold out event. Tickets sold out within minutes of their release in February and you will only get a ticket now if you have blind faith in the touts or Seatwave and are willing to hand over the money for the mortgage payments on your one-bedroom flat that cost €475,000 in the boomtime.

Ed Sheeran fans range from kids needing lifts in with their parents to those who want to leave before the encore to beat the traffic. Parking is available for approximately €12 in the Point Village car park, beside the location of First Dates Ireland, the Gibson Hotel. Make a day of it and check that tourist spot off your hitlist too.

Traffic will, as they say, be cat so if you can, leave the car at home and hop on the Red Luas to The Point. Or walk. It’s a cloudy day so you won’t be able to pause and take Instagram photos of the Liffey and its bridges, captioned with “Dublin! You beaut!”, but it’s good to get some fresh air all the same.

The closest Dublin Bus stop to the 3Arena is on Castleforbes Road, a two-minute walk from the venue, and the 151 is your chosen chariot.

Who will be there?

Everyone except you. Ed Sheeran fans are everywhere. With the communal office radio set to 2FM, you might have caught your co-workers singing along to the song he wrote about Ellie Goulding cheating on him with Niall Horan (that’s the Lucy Pearl sampling Don’t) or you might have heard that their first dance at the wedding was to Thinking Out Loud. You pass Ed Sheeran fans on your lunch break, with a furrowed brow, regretting the chance to ditch work and hop on the next bus to Salthill, Galway where he was filming his video in O’Connor’s pub for his latest single Galway Girl.

You might even be related to one. A niece or a nephew obsessed with his latest album ÷ or a sibling who quips “I quite like Ed Sheeran” to no one in particular at a family meal, hoping to start a conversation but, instead, your mam asks her to pass the mash.

Why are they there?

To have a good time and to propose. During Ed Sheeran’s Croke Park two-night run in July 2015, proposals were two-a-penny. A member of Kodaline even proposed to his girlfriend on stage. In a bid to go viral, keep your phones ready and your eyes peeled for the wave of men (or women) dropping down to one knee, like a Jonestown Massacre of romance.