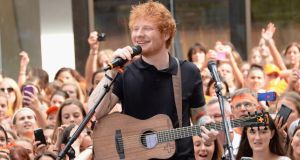 Ed Sheeran has released his first new studio recordings since his album X in 2014. Rather than release a surprise album, or a surprise single, he’s taken a middle ground and released two new singles, Shape of You and Castle on the Hill.

The songs were posted on streaming and download services in the early hours of Friday morning, with Sheeran commenting: “Hello 2017! I’ve been working hard on the new material and I hope you can be as excited about it as I am. I really wanted to show two different sides to my music that I’m equally as passionate about and I just knew I wanted to roll with two songs at the same time. I’m absolutely buzzing to be back.”

Sheeran’s label Atlantic claimed, rather optimistically, that Shape of You “dismantles and rebuilds modern pop music using little more than a loop pedal”, while Castle on the Hill is apparently a Springsteenesque “homage to growing up in Framlingham, Suffolk”.

Castle on the Hill was written by Sheeran and Benny Blanco, and produced by the latter. While Springsteen fans might struggle to compare it to Born to Run, it’s a polished piece of drivetime rock. Shape of You, written with Johnny McDaid and Steve Mac, is more of the familiar Sheeran sound, crossing dancehall influences with expertly tooled minimal R&B.

After several years self-releasing music and building an audience through DIY touring, Sheeran became a major global star after signing to Atlantic in 2011. His second album, X, received 90 platinum certifications worldwide, selling 13m copies, and was No 1 for 12 weeks in the UK charts. - (Guardian Service)