Do artists who take money for ads really poison and pervert their songs?

Fees can range from €5,000 up to the tens of thousands of euros for Irish artists 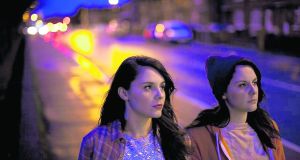 Turn on any national television station and chances are you’ll hear music by an Irish artist during the commercial break. What began as a trickle of musicians lending their art to adverts has turned into a flood. Dublin’s Le Galaxie currently soundtrack a Virgin Media advert, Villagers are used on Discover Ireland’s Ancient East campaign, while James Vincent McMorrow is on a Barry’s Tea ad. In recent times Wyvern Lingo have worked with Jameson; Heathers and The Riptide Movement kick-started their careers with Discover Ireland campaigns; Delorentos have had their music used by Barry’s Tea and AIB; Gavin James’s music has been used by the AA; and Ham Sandwich have lent their voice to Lidl.

Others whose work has been used on advertising campaigns include The Strypes, Vyvienne Long, Hozier, Funeral Suits, The Stunning, Two Door Cinema Club, Ports, Laura Izibor and Picture This.

Not everyone sells music for ads. Tom Waits calls it a “virus”, saying: “Artists who take money for ads poison and pervert their songs. It reduces them to the level of a jingle, a word that describes the sound of change in your pocket, which is what your songs become.”

His criticism is in line with an older generation’s thought that teaming up with a brand amounts to “selling out”. Yet the collapse of traditional income streams within the music industry has softened attitudes for most. Economic realities, along with potential exposure to a large audience, are the reasons why many Irish musicians are lining up to do ads. In an age when lucrative record deals are a scarcity and sales of music have plummeted, the financial rewards available through licensing or synching can be significant.

Defunct Dublin band The Rags received about €30,000-a-year for licensing their self-released track Monsters & I to Campbell’s Soup in 2006 for a campaign that lasted three years.

“For us, it was a godsend,” says Daniel Anderson, the band’s former lead singer who has since embarked on a solo career under the name Anderson. “Any kind of income like that, especially when it’s considerable, has a huge impact on your ideas and what you can do and how you do it. We had a bit of label interest at the time but nobody was committing and it’s an expensive business when you want to record an album. And we were a very intense band. It was a seven-days-a-week thing.”

The income from that advert helped fund recordings, renovate a rehearsal space, pay for new instruments and contribute to pre-production costs for the band’s sole album, 2010’s A National Light. It also led to a short-term deal with Sony, which rereleased Monsters & I in 2007 due to the exposure the TV advert had generated.

There is no typical fee for a track; amounts are typically dictated by budgets and the negotiating skills of labels and publishers. Fees can range from €5,000 up to the tens of thousands for Irish artists; established international acts command higher sums. Fáilte Ireland paid €129,000 (plus VAT) over a six-year period across three Discover Ireland campaigns that featured Heathers, The Riptide Movement and Villagers. James Vincent McMorrow licensed his cover of Steve Winwood’s Higher Love to a number of brands, including Amazon’s LoveFilm (now Amazon Prime Instant Video). The licensing earned him about €50,000, which he donated to the Irish mental-health charity Headstrong.

“I had recorded that song for charity and I really wanted them to get as much money as possible,” he says. “It was huge for them.”

The song’s placement had a real effect on McMorrow’s career. “That advert really kick-started the album heavily in the UK,” he adds. “It was hugely beneficial and very eye-opening for me, because I really didn’t think it would be. I didn’t think that it would be that much of a game-changer.”

Hozier, too, has spoken of “the big kick over the fence” he got in 2014 when he licensed Take Me to Church to a Beats by Dr Dre commercial. He wrestled with the notion of “selling out” but ultimately signed up because of the potential audience he could reach. “I asked myself the question, ‘Would I turn my back on an opportunity to have my music heard by a larger audience for the sake of my pride, when there’s people out there breaking their backs for any kind of opportunity similar to that?’ ”

Mark Crossingham, managing director of Universal Music Ireland, has signed a number of Irish acts – including Delorentos, The Riptide Movement and Le Galaxie – that have done deals with brands.

“It’s not a new thing,” he says of such deals. “I just think that the media have begun to focus on it a bit more recently. It’s an important source of income. It’s not always the case though that you get a track in an advert and it helps you break an act or sell records, but in some cases it can do.”

Crossingham says that the label has seen a spike in the sales of records by Delorentos, Riptide Movement and Le Galaxie following synchs for TV adverts. “You always see an increase in Shazam activity as well,” he says, “which is obviously a sign that people are engaging with the track. With certain acts, if you’re struggling to get radio or exposure elsewhere, it can really, really help. It’s not just TV adverts either these days. If you get into a trailer for something like the new Walking Dead, that can be as impactful as a TV ad.”

McMorrow agrees, pointing to an early synch on the teen drama One Tree Hill in 2009, before he had even completed his first album. “They came and asked could they use a song called We Don’t Eat from the first record and I had to actually mix and master it specifically for that. They gave me enough money to finish the whole mix and mastering of that entire record. That was huge.”

However, The Divine Comedy’s Neil Hannon – who has licensed tracks for use on adverts – sees the current approach by some bands and labels as problematic. “I think it’s gone far too far in a certain direction nowadays, with new bands trying to launch their careers on the back of a bloody advert. It’s kind of really cart before the horse. You’ll never be able to have a degree of independence and independence of thought and creativity if you’re hooked up to a project too overtly. In an ideal world, you’d never have your music on an advert.”

Anderson, though, is keenly aware that we are not living in an ideal world. “The way I look at it is plain and simple. If I’m in a situation where I can express myself and my imagination, whatever happens after that, I don’t really give a shit. I’m responsible for quality control at the very start. So after I get what I want from a song – and I get that at the beginning, when nobody else is involved and nobody hears it – whatever happens after that, I’m not responsible for.

“You can say I have sold out or have done this or that. I don’t care. When I die nobody is going to be asking those questions because the reality is that I’ll probably be long forgotten. No one will give a shit about my music so if they give a shit about it now because it’s associated with Campbell’s Soup, that’s fine. From my perspective, the goal for the song is for it to be heard on one level or another. It’s always going to be reductive, people’s impressions. So you accept that and get on with it.”

Úna Keane: In the Deep review – out of time but also timeless
10