Battle of the brands at Electric Picnic: Subtle as a Jaegerbomb

At least Casa Bacardi and Red Bull focus on the music at the Stradbally festival. As for the rest ... 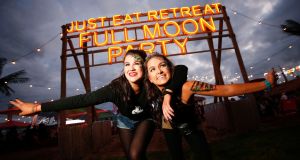 Just Eat’s go at a Full Moon Party came off like a club theming itself in preparation for a Junior Cert disco night. Photograph: Conor McCabe

You can always count on the big brands to bring a little bit of Harcourt Street to Electric Picnic, adding to the festival exactly what it does not need. Across the site, competing brands shouted at each other with venues and concepts as subtle as a 3am Jaegerbomb.

Some brand-y elements worked better than others, but what was interesting was the lack of opposition to gaudy marketing on site, with visible branding clearly not seen by many of the kids as lame. Being labeled an “influencer” (someone on social media agencies use as an advertising proxy which somehow allows them in turn to keep up the facade of being able to claim relevance to their clients) is an aspiration for many young (and some not so young) people. So being sold stuff, or being perceived as a human billboard is no longer the Death Of Cool it once was.

One of the most unpleasant aspects of the festival this year was the meeting point of brands screaming for attention, culminating in an atrocious clash of sound, with sound systems from Just Eat, Today FM and Casa Bacardi all bleeding into each other at one spot in the field.

It’s odd that in a festival perceived as cool, most brands go for the uncoolest angles. A few are engrained in the festival proper, such as Casa Bacardi’s almost mystifying constant popularity year in year out.

In fairness to the Casa, it has a solid identity, creates a recognisable atmosphere every year, and has its audience. But as the years have gone by, it is being encroached upon by poorly executed ideas trumpeting the existence of other brands.

Just Eat’s go at a Full Moon Party came off like a club theming itself in preparation for a Junior Cert disco night, sand and deck chairs, trying to make an inexplicable link between a festival in Stradbally and a shindig in Thailand. Why? Who knows.

Red Bull consistently try and make their presence music-focused with a bit of an edge. This year they introduced their Soundome with 46 “perfectly calibrate speakers”. Heineken’s Live Your Music (terrible name) bases what is essentially a highly branded music-focused club in the field, and festival-banker The Magician played a great set on Friday night there.

As these things are wont to do, there were some ancillaries that no one really paid attention to; “music fans can unlock more experiences in the Live Your Music Room; three exclusive areas where the crowd programs the lighting, the visuals and the atmosphere in The Club, The Music Box and In Scope.”

People don’t necessarily want to fiddle around with marketing ideas, though, just a good place to have a party and this large stage does provide that.

The run up to the Bold Motel – sorry, Bold mOTel – which is an advertisement for Heineken’s cider, Orchard Thieves, was an exercise in convolution, where members of the public could call a hotline to “interview for some of the wacky roles we might need help with over EP weekend.” The best “interviews” – in the form of leaving a voice message – for made-up jobs including the Head of Inflatables, the Trainee Changing Room Executive, the Lead Lobby Liaison and the Director of Towel and Robe Distribution, won tickets to the festival.

Like the fake jobs you could do fake interviews for, the Bold Motel is really about things that don’t exist, such as the insistence on calling its dance floor a “pool” when it bears little to no resemblance to a pool, and the only water in sight is sloshing around in pint glasses. On Sunday afternoon, the DJ was banging out cheese. Nobody really needs to hear Gasolina at a music festival bar.

3Disco was Three Ireland’s garish venue on site. They went for the omnipresent lip-sync battle, as a way to engage the youth, about as original as karaoke at this point.

Hosted by drag queen Davina Devine, “social media’s reigning divas” (I know) went “head-to-head” for “the ultimate bragging rights”, or something. Electric Ireland has of course cornered the market on cheese at the Picnic, providing some really fun pop moments on their Throwback Stage (this year it was S Club Party and 5ive everyone was excited about) with its tongue firmly planted in its cheek. It’s clear that many of the brands on site are trying to follow that lead, going for lowest common denominator music policies, and a general air of Magaluf strip mall. For the most part, it’s all quite basic. In general, the brand presence isn’t doing anything particularly clever or new (besides Red Bull), nor realising that a real “experience” would not involve a brand’s name being shoved in your face at every juncture.

The worst offender was Logic, a vaping brand. Their ugly structure, mocked up with brickwork printed on its outer material, looked like something thrown up on the outskirts of an Irish town with “units” still to let.

Is it better that much of the branding is so off-putting and basic that we don’t get sucked in with conniving marketing? Should we be glad to name it and call it out, instead of agencies and brands actually doing something really clever? Perhaps. But it has to be said, these are mostly gigantically rich corporations, and appear to have free reign on site to be as obvious and garish as they want. A little more thought put into their presences might work better for everyone.