Class of 2015: The breakout stars of this year’s South by Southwest

Freshly returned from Texas and with his ears still ringing, Jim Carroll picks out the bands and acts that shone the brightest at SXSW 2015 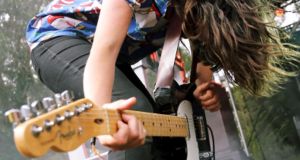 All is quiet in Austin on the day after South By Southwest 2015 has come to a close. The visitors are heading home; the locals are getting back to keeping Austin weird.

This bout of Lone Star state March madness may have highly regarded interactive and film strands, but it’s the music festival that is still at the heart of the SXSW experience.

Music is the biggest contributor to the stats that make the event look so impressive to the world at large. In the space of five days, you’ve more than 2,000 bands in town to play to around 300,000 people – ensuring a bonanza of $315 million for the city.

SXSW is big business. You can see it in the number of brands jostling for a toehold in Austin . Some got traction for all the wrong reasons. McDonald’s landed here for the first time this year, but faced criticism for initially planning to not pay acts who played its events. Every time we cycled past its stage on Red River & 5th, it was largely deserted, save for a forlorn looking Ronald McDonald.

The McDonald’s marketing team’s post-mortem won’t be the only glum one from this year’s event. It would seem that all the bad press around SXSW 2014 – from the tragic car crash during the festival to the corporate heavy handedness that was particularly striking last year – has had a knock-on effect.

Crowds appeared down over the course of the music festival, judging by the ease of getting into daytime shows, while a lot of music-industry folks clearly decided to give Austin a miss this year. There was a dearth of crowd-pulling talent, with a lot of marquee bands deciding not to play the branded shows and grab a big pay cheque. While there were some well-known acts in town (from Future Islands to D’Angelo to Flaming Lips), it wasn’t a patch on previous years.

But we weren’t here to see acts everyone already knows about. The best thing about SXSW Music is that it’s still a magnet for the best new bands around. You could spend all day every day, from mid-morning to the wee small hours, checking out wannabes, will-bes and, inevitably, never-gonna-bes on stages in bars, venues, clubs, backyards, car parks and other makeshift spaces all over the city.

Here, then, are 20 acts from this year’s SXSW draft that we reckon are going to hang around.

Courtney Barnett
SXSW 2015’s queenpin in every way. The Australian and her band played eight shows and wowed at every turn with swaggering guitar-slinging and sassy, sharp songwriting. Songs about buying a coffee percolator, Melbourne swimming pools and grocery shopping came tied up in the coolest rad guitar buzz heard in yonks.

Leon Bridges
Close your eyes and you’d swear it was Sam Cooke crooning before you. From Fort Worth, Texas, Bridges is a star from head to toe, a singer rocking gospel, R&B and southern soul with fantastic riffs and a big stripe of style. An imminent album produced by White Denim’s Austin Jenkins and Joshua Block will ensure Bridges’ days of washing dishes are over.

Boogie
SXSW has serious form in the hip-hop game and there were many cutting-edge talents in Austin to make their stand. We really dug California rapper Boogie who was showing off his Thirst 48 mixtape. Like Kendrick Lamar, Boogie has a strong talent to examine and observe black American life with forward-thinking insights and a subtle, nuanced wit.

Meg Mac
There’s been a buzz around Meg Mac these last few months – she recently signed to Lyor Cohen’s 300 Entertainment set-up – and you can see why when she starts to sing. A powerful, rocking soul-pop voice underlining cracking tunes such as the bluesy holler of Roll Up Your Sleeves.

Shamir
Another act with a major buzz who didn’t disappoint. The Las Vegas kid played a 20- minute set that was jam-packed with loose, giddy pop vim and vigour to make up one hell of a dance party. By the sound of those tunes, he’s got a smashing debut album ready to roll.

Madisen Ward & Mama Bear
It only took about a minute to be smitten by Kansas City dude Madisen Ward, his mama Ruth and their spine-tingling blues-and-country-and-gospel. It’s a raw, bare-bones sound that works because it’s righteous, grounded in the moment and coming from a good place. In a canny piece of business, Glassnote snapped them up a few months ago.

Girl Band
The Irish band who made the biggest and loudest splash at SXSW 2015 thanks to explosive, visceral sets at many high-profile shows. Over the past three and a half years, the Dubliners have become a serious live act, honing a noise-pop sound that contains a unique and mesmerising span and punch. The only band in Austin who sounded like a rocket going off at close quarters.

Viet Cong
Whatever about the controversy the Canadian band are fielding over their name, their live shows at SXSW were something to relish. Angular, edgy, jagged and intense post-punk like this requires serious chops and Viet Cong have them in spades. A show all the more impressive given drummer Mike Wallace, the heartbeat of the band’s dark and ferocious sound, was operating with a broken arm.

Tobias Jesso Jr
From Vancouver, Tobias Jesso Jr is a tall dude who sits at the piano and hushes the crowd with sad songs about life, love and heartache. There are echoes of past giants in Jesso Jr’s sound, but the soul-baring that has gone into such lovely, bittersweet tunes as Hollywood and his superb lyrical prowess are very much his own handiwork.

Odeza
Seattle duo Harrison Mills and Clayton Knight created one of 2014’s best albums In Return so it was intriguing to see how their bright, euphoric, effervescent electronic pop would work live. While you’d have welcomed some vocalists onstage to provide the soul for Say My Name or All We Need, Odesza worked around that disadvantage by turning up the intensity, pumping more buzz into their grooves and bringing the party.

Yumi Zouma
Two lovely EPs and a tour with Lorde have led to many mentions in the dispatches for this New Zealand band. Live, there’s much to admire too, in both their sweet, yearning, hazy pop and singer Kim Plfaum’s sassy, cute vocals. More tunes like The Brae and they’ll be elected.

Tkay Maidza
A pint-sized Zimbabwe-born, Australia-reared teenager in bovver-boots, Tkay Maidza came, saw and delivered with tunes full of infectious hooks and energy. There are notes of MIA and Azealia Banks, but Maidza has an oomph and wallop to her sound and quickfire rhymes that are hugely beguiling.

Wand
From Los Angeles, Wand bring the psych-pop and garage-rock noise to the proceedings. There’s a lot going on, from the fantastic playing from lead guitarist and vocalist Cory Hanson to Evan Burrows’ meaty, fierce drumming. There are twists and tangles of Ty Segall and Thee Oh Sees on some tracks, but there’s also something much different and far more experimental and fun going on.

Summer Heart
Swedish electronic producer David Alexander is a man who has chosen his musical moniker well. Summer Heart’s set at SXSW was chockablock with moody, sun-blissed tunes like Beat of Your Heart, all of which sounded like the best July jams imaginable. One to return to again – and not just during the summer months.

From New Orleans, Kristin Diable is a lady very much on the rise. Her new album, the Dave Cobb-produced Create Your Own Mythology, is a fascinating slew of Nashville country, Memphis soul and southern- rock. Live, the band kick, strut and swagger like pros, with Diable herself swinging like Lucinda Williams or Stevie Nicks. An infectious brew.

Your Old Droog
Many reckoned that newcomer Your Old Droog was Nas in disguise when he first emerged due to vocal similarities. Your Old Droog turns out to be a tall, smart New Yorker spitting roughneck rhymes and hardchaw thumpers like it’s 1994. Much like other rappers from the Big Apple at present, Droog wants to go back to the golden age – this is no bad thing when it’s done for inspirational rather than nostalgic reasons.

Milk & Bone
Milk & Bone are Montreal’s Camille Poliquin and Laurence Lafond-Beaulne, a duo creating atmospheric electronic music with allure. It’s a deceptively simple template, with the minimal patterns containing much emotional width and depth. Their debut album Little Mourning has just gone on release so add that to your post-SXSW playlists.

Fantastic Negrito
Both shows we caught by California bluesman Xavier Dphrepaulezz were rammed to the rafters thanks to some timely National Public Radio rave notices. Dphrepaulezz may have released his debut album nearly 20 years ago, but he’s getting another bite of the cherry as Fantastic Negrito. Thanks to passionate, raw sounds and some vintage good vibes, this may well be his time.

Amason
A Swedish band named after a Volvo car from the 1960s, Amason do the smart pop shuffle with great aplomb. Featuring musicians from Miike Snow, Dungen, Little Majorette and Idiot Wind, Amason have a knack for crafty pop tunes full of wonky asides and kooky turns. They’ve also got a real winner in frontwoman Amanda Bergman, whose vocals bring great polish and spirit .

The pandemic has split us into two distinct camps: The Couples vs The Singles
6