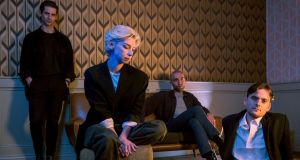 In late September of 2018, Other Voices arrived in Ballina, Co Mayo. Expectations were high, inevitably, but no one really knew how one of the country’s premier music and cultural festivals was going to be received. Your correspondent was there for the weekend, staying in a fancy hotel, sharing air with the likes of Leo Varadkar, Sam Fender, and Mango x Mathman. The buzz, however, was nowhere close to the hotel but in the town itself, wherein many bars and St Michael’s Church – because it’s Other Voices, there always has to be a church in the mix – were hosts to a broad range of music acts. It is the same for Other Voices’ return visit next Friday and Saturday, except this time the vibe is bigger and better, and the good folk of Ballina know exactly what to expect.

The template is similar to the December-set, Dingle-based Mothership event: carefully select the church acts, making sure there is a decent balance of new and established names, enough of each to persuade the unsuspecting, perhaps even casual music fan to leave the venerable venue with a lighter heart than they had walking in. Once the hymn-sheet heroes and heroines have been chosen, it’s time to stuff the Music Trail with Irish music acts (when Other Voices pitches its tent in Ireland, it always calls upon domestic talent) that can not only snag the attention but also impress enough to make you take note of names and search out subsequent gigs of theirs.

The Music Trail is by now a standard element of the Other Voices experience. It began in Dingle about five years ago, and for many that flock to the small Co Kerry town each winter it has become the main music event and not – as it once was – the sidebar. This year’s collection of Music Trail acts at Ballina is as varied and striking as ever. Some names we know of (including Alex Gough, Autre Monde, Farah Elle, God Knows, Join Me in the Pines, Maija Sofia, Nealo, Sick Love, Murli, Squarehead, The Mary Wallopers), and others we don’t (including Citrus Fresh, Joel Harkin, Dani, Uly, Rushes, Graham Sweeney). Not to worry about the latter – at every OV Dingle Music Trail this writer has experienced there have, without fail, been several heretofore unknown acts that knocked the proverbial wind out of the proverbial sails.

Other nominal sidebars include Ireland’s Edge, a one-day multi-disciplinarian discussion event that will, states Other Voices, “consider some of the existential questions facing Ireland in this time of mass disruption, innovation and change”. Taking place at the Jackie Clarke Museum, 10.30am-4pm, Saturday, February 29th, speakers include Prof Diarmuid Ferriter, Ola Mustapha, Dr Patrick Collins, Saoirse McHugh, Prof Laoise McNamara, and Dr Rhetta Moran. Children-friendly events include Our Rhythm, Our Climate (The Library, 10am-10.45am, Saturday, February 29th), which is a mini-masterclass in blending rap with drumming with performers God Knows and Murli.

And yet, like a lapsed Catholic languishing in their deathbed, clutching at straws of the faithful, it always ends up back at the church, doesn’t it? Nabbing music acts as successful as Elbow and David Gray to perform in a tiny church in a small Irish town is part of the reason why Other Voices has gained such a reputation for quality surprises. Other church performers across the two nights include the varied delights of Soda Blonde, Denise Chaila, JyellowL, Jesca Hoop, and Skinny Living. To which in response we can steal one appropriate word from Fleabag’s sexy priest: “Kneel!”