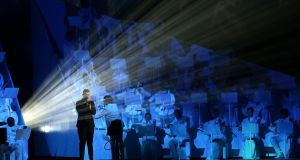 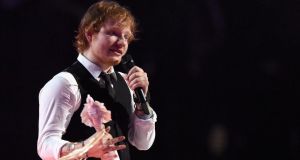 Ed Sheeran wth his Album of the Year award on stage during the Brit Awards 2015. Photograph: Gareth Cattermole/Getty Images 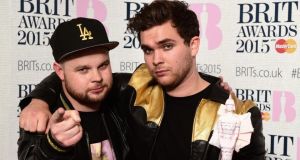 Ben Thatcher (left) and Mike Kerr of Royal Blood pose with their British group award at the Brits in London on Wednesday. Photograph: Leon Neal/AFP/Getty Images

Golden boys of British pop Ed Sheeran and Sam Smith have shared the honours on what was a muted night — literally in the case of Kanye West — at the Brit Awards, while another of its biggest stars fell flat.

There also appeared to be a slip-up at the event, shown live by ITV, when Madonna’s performance of Living For Love saw her apparently accidently pulled down a set of steps by one of her dancers, who sent her sprawling, before she continued her performance.

US rapper West, supported by a huge backing cast and a flame thrower, debuted his new track All Day at the industry bash, but viewers at home were left confused when ITV took the decision to mute some the lyrics.

Former EastEnders actress Hetti Bywater said: “Erm....Kanye, can you please stop my TV from muting and just stop with the offensive language, cheers”.

Another viewer, tweeting as Shukat1 , said: “Why have Kanye if you’re just gonna censor the performance?”

An ITV spokeswoman said: “ITV took the decision to use an audio mute during the performance. The Brits is broadcast live on ITV from 8pm to a wide audience. We have operated a short time delay as standard practice for some years on the show, to allow us to mute language that may be inappropriate for that wide audience, and elected to do so in this case, given the performance took place shortly after the 9pm watershed.”

The awards kicked off with a wave of dancing waiters welcoming hosts Ant and Dec to the stage before Taylor Swift became the first act to perform.

The American star, wearing a short black suit, opened the show with her track Blank Space.

The ceremony, known formally as the Brit Awards 2015 with MasterCard, wais held at the O2 Arena in London.

Smith, whose rise began when he was named the Critics Choice winner at the Brits last year, said his win was proof he was “stepping in the right direction”.

Swift, who won the international female award, paid tribute to Sheeran, saying: “Honestly I know I wouldn’t be up here if it wasn’t for one of my best friends who took me to pubs and taught me to make a good cup of tea and taught me everything I know about the UK.”

The award for British group was presented by Led Zeppelin guitarist Jimmy Page to rock duo Royal Blood, who beat X Factor heartthrobs One Direction to the punch.

Guitarist Mike Kerr said: “This is a huge surprise for us. It’s probably more of a surprise for everyone here because you may not know who we are.”

But One Direction’s huge fanbase voted the boyband winners of the award for British artist video for You & I.

Accepting it on their behalf, Simon Cowell said: “This is so exciting but Sam, you can’t win everything tonight.”

Mark Ronson presented the award, which was designed by Tracey Emin, for best British female solo artist to Paloma Faith who won on her third time trying.

The tearful singer said: “I’m so moved, it’s been a long time coming, I’m a big fan of Tracey Emin, I’m a big fan of women all over the world and it’s taken me 14 years to stand up here and accept this award and it means so much to me”.

The self-confessed “bumbling wreck” dedicated her award to “all the underdogs and all the grafters”.

The award for international male solo artist was presented to Pharrell Williams and Ronson himself picked up the best British single award for Uptown Funk featuring Bruno Mars.

He thanked Mars who he said was the “world’s most talented Hawaiian”.

Mastercard British Album Of The Year

British Producer Of The Year

British Artist Video Of The Year