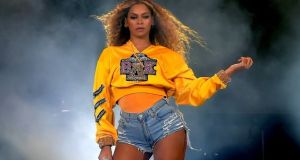 Beyoncé has been given the humanitarian award at the BET awards and praised for her charitable work through the BeyGOOD foundation. File photograph: Kevin Winter/Getty Images for Coachella

Beyoncé has been given the humanitarian award at the BET awards, using her speech to encourage viewers to vote “like our life depends on it” in the upcoming US election, and calling on them to “dismantle a racist and unequal system” in the country.

Former US first lady Michelle Obama highlighted the singer’s commitment to the black community before presenting her with the award, saying: “You can see it in everything she does, from her music that gives voice to black joy and black pain, to her activism that demands justice for black lives.”

Obama praised Beyoncé for promoting younger performers and for “calling out sexism and racism when she sees it”.

Beyoncé dedicated the award to protesters around the country.

“I want to dedicate this award to all of my brothers out there, all of my sisters out there inspiring me, marching and fighting for change. Your voices are being heard and you’re proving to our ancestors that their struggles were not in vain. Now we have one more thing we need to do to walk in our true power, and that is to vote,” she said.

“I’m encouraging you to continue to take action, continue to change and dismantle a racist and unequal system,” she said. “There are people banking on us staying at home during local elections and primaries happening in states across the country. We have to vote like our life depends on it, because it does.”

Beyoncé was praised for her charitable work through the BeyGOOD foundation, including teaming up with her mother, Tina Knowles, to ensure more Covid-19 testing was available to black residents in her home city of Houston, Texas.

Several artists made political points during their performances, including Roddy Ricch, who wore a Black Lives Matter shirt while he rapped.

DaBaby released a new video for his song Rockstar – which has spent six of the last seven weeks at number one in the UK – in which he evoked the killing of George Floyd, with a police officer kneeling on his neck.

Chris Brown won two awards for best collaboration – his Drake track No Guidance – and male R&B/pop artist, with the female equivalent category won by Lizzo. Actor categories were won by Michael B Jordan and Issa Rae, and the sports categories by LeBron James and Simone Biles.

Earlier in the weekend, Beyoncé also announced Black is King, a new film to accompany songs she released in 2019 on the Lion King soundtrack album, The Gift, airing on Disney+ from July 31st. She released a new song to mark Juneteenth earlier this month, Black Parade, also the name of her newly announced directory of black-owned businesses.–Guardian

Mad Men made perfect sense during the swirling disorder
3

Patrick Kielty: ‘We weren’t sure how many people would turn up – 400 queued around the corner’
10

Ralph Steadman: With gonzo, you don’t cover the story; you become the story
Real news has value SUBSCRIBE