Best trad gigs: From No Crows to the Michael Dwyer Festival 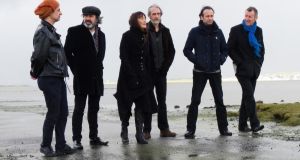 Sligo based genre-bending outfit with Steve Wickham, celebrating the cross currents that animate jazz, roots, Irish traditional and world music forms, with no small tincture of humour in the mix. The band is anchored by Felip Carbonnell on guitar, percussion and vocals, Ray Coen on guitar, fiddle and vocals, Anna Houston on cello, Oleg Ponomarev on violin and vocals, and Eddie Lee on double and electric bass and vocals. They will be joined here by The Waterboys’ mischievous Steve Wickham, also a founding member of this folk orchestra.

Na Píobairí Uilleann presents Session with the Pipers, a monthly recital of traditional music and song. Tonight’s sessions sees a return to Dublin by Limerick-based piper Mikie Smyth, fiddle and flute duet Donal McCague and Tommy Fitzharris, and a first appearance at the concert series by singer Edel Vaughan.

The power of the family dynamic is writ large in the repertoire and interplay between these three family members: Mary Shine and Noel Greene, and their daughter, Ellie, whose voices coalesce and diverge with the intuition of musicians long versed in one another’s nuances. Ellie’s voice and phrasing are a joy, as anyone who has heard her singing their own composition The Girl In The Lavender Dress will attest.

This year marks the 20th anniversary of this festival celebrating the life and music of the late Beara peninsula tin whistle and fiddle player, whose brothers – Finbarr, John and Richard – have their musical genius celebrated during this weekend also. This year’s programme is packed with sessions, recitals and workshops, fuelled by a fine roster of visiting musicians, including Sligo fiddle player Manus McGuire. Also featuring a welcome return of Matt Cranitch with Jackie Daly, along with Two Time Polka, Céilí Allstars and many more.