BBC ‘Proms in the Park’ in Enniskillen, a terrific success 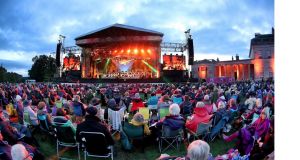 Crowds at the Proms in Enniskillen.

Castle Coole in Enniskillen, Co Fermanagh was the perfect backdrop for a night of stunning live music on Saturday as thousands of people descended on the grounds of the 18th-century stately home for BBC Proms in the Park.

Surrounded by 700 acres of picturesque wooded landscape, the three-hour show featured a stellar line up of home-grown and international talent performing alongside the Ulster Orchestra under the baton of David Brophy, including Sir James and Lady Jeanne Galway, internationally acclaimed percussionist Dame Evelyn Glennie and virtuoso violinist Daniel Hope.

The event included a special tribute to the renowned musician and former proprietor of The Impartial Reporter newspaper, Joan Trimble, who died in 2000, as the Ulster Orchestra performed one of the composer’s finest works, Suite for Strings (Finale).

About 6,000 people, including DUP leader Arlene Foster and Sinn Féin MP Michelle Gildernew turned out for the BBC Northern Ireland’s biggest outdoor broadcast of the year, hosted by Noel Thompson and Claire McCollum.

There was a nod to Oscar Wilde and Samuel Beckett, both of whom attended Portora Royal School in Enniskillen, before Fermanagh-born actor Adrian Dunbar recited two specially-written poems about the lakeside county by poet Frank Ormsby.

Dunbar said it was “fabulous” to pay tribute to the 70-year-old poet who grew up in nearby Irvinestown and was taught by Seamus Heaney.

There was also an unforgettable appearance by Ruthie Henshall, best known for her lead roles in West End and Broadway productions such as Chicago, Billy Elliot and Les Miserables, which included a medley of wartime songs accompanied by images of American troops stationed in Fermanagh during the second World War .

Acclaimed Irish ensemble Anúna, who are celebrating their 30th anniversary, performed a moving piece originally composed as a tribute to the 1998 Omagh bombing which killed 29 people and injured more than 200 others.

Thompson described the performers at the Proms, now in its 16th year, as “a wealth of world class talent”.

The dark night sky was then lit up with colours and sparkle in a magnificent fireworks display bringing proceedings at the home of the Earls of Belmore to a fitting finale.

Mary Trump’s book: Eight of its most shocking claims about the US president
5

Fairy forts: Why these ‘sacred places’ deserve our respect
9