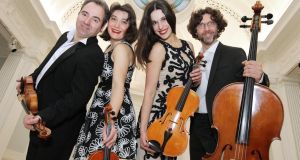 3 Saturdays: 3 Kinds of Music
Mick Lally Theatre, Druid Lane, Galway 11am thegalwaymusicresidency.ie
The Galway Music Residency’s ConTempo Quartet like to mix things up. One of their annual projects is a series of three Saturday morning concerts in which performers from different musical backgrounds rub shoulders. This year the series is guest curated by Matthew Berrill (a former participant), and the first concert brings together conductor Sinead Hayes and her flute-playing sister Nuala (they play Bach and traditional tune), fiddler Seán Hughes and piper Pádraic Keane (with the latter joining the ConTempo for Amanda Feery’s Something Like Light But Not), and the ConTempo on their own playing Dave Flynn’s The Cranning, which mixes traditional flavours into the world of the string quartet. Later concerts in the series are on April 21st and May 26th. The ConTempo play Haydn’s Seven Last Words, with readings by Vincent Woods, at NUI Galway on Thursday, and, as the RTÉ Contempo Quartet, they play late Beethoven and Deirdre Gribbin at the NCH on Sunday afternoon, and more late Beethoven (the Quartet in A minor, Op 132) at the NCH on Friday lunchtime.

RTÉCO/Robert Houlihan
NCH, Dublin 8pm €12-39.50 nch.ie
Finland’s Jean Sibelius and Denmark’s Carl Nielsen, recently paired in an RTÉ NSO concert under Jaime Martin, are at the heart of the RTÉ Concert Orchestra’s latest programme, conducted by Robert Houlihan. It’s an all-Nordic affair with two works by Sibelius, the Karelia Suite and Finlandia, and one by Nielsen, the Maskarade Overture. But it reaches much wider into Nordic musical culture than that. Norway is represented through Edvard Grieg’s Piano Concerto (soloist Alexei Nabioulin) and Peer Gynt Suite No 1. And there’s also the first and best-known of Hugo Alfvén’s Swedish Rhaspodies, one of those pieces whose tunes are well known to people who would never be able to tell you where they heard them before.