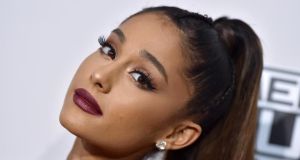 Ariana Grande, a proud vegan, has accidentally paid homage to a Japanese barbecue grill with her latest tattoo on her palm.

The singer, who is known for her fondness of tattoos (she now has 24), attempted to celebrate her latest single 7 Rings but instead ended up being the butt of jokes and bad puns across social media. People quickly reacted to a now-deleted photo on Instagram to tell Grande the characters actually translated to “shichirin”: a small charcoal grill.

On Twitter, Grande acknowledged she had forgotten a symbol but added that the design won’t last, with tattoos fading faster on the palm as the skin on the palm regrows faster than that on the rest of the body. “It hurt like fuck n still looks tight. I wouldn’t have lasted one more symbol lmao,” she tweeted.

Met with all the Asians, and our official ruling is that the Ariana Grande tattoo is good.

if you put 七 into translator it translates it into "seven" and 輪 means "wheel" or "ring" so it's right, but when you put it together it's really a barbecue grill. so yeah, just stop using other languages, you don't know, for aesthetics.

“But this spot also peels a ton and won’t last so if I miss it enough I’ll suffer thru the whole thing next time.” She later wrote: “Pls leave me and my tambourine grill alone. thank u.” Those tweets have since been deleted.

Her attempt at humour didn’t stop people dragging her over hot coals for her blunder. Some were ironically sympathetic: “Met with all the Asians, and our official ruling is that the Ariana Grande tattoo is good,” wrote Twitter user Kevin Nguyen. Ariana Grande’s new tattoo “means Japanese style bbq grill, not 7 rings,” one user tweeted. “Just google ‘SHICHIRIN’ [type of grill].”

“Imagine getting bbq grill tattooed on your palm,” another wrote.

The video for 7 Rings clocked up more than 100m views on YouTube and follows Grande’s record-smashing song Thank U, Next. Both songs debuted at the top of the Billboard Hot 100 chart. Her album, also titled Thank U, Next will be released on 8th February.